Before Neil Armstrong took his small step onto the moon, an unexpected turn of events sent the mission off-course.

Armstrong was the Apollo 11 mission commander and pilot of the lunar module, called Eagle, the tiny spacecraft that launched from the main spaceship to carry the first humans to the surface of the moon.

The lunar module had overshot its intended landing point on a smooth part of the moon’s surface by 4 miles, and the new target — on the West Crater’s northeast flank — was covered in large boulders. Seeing the rocky landscape, Armstrong took manual control and flew the Eagle past the crater.

He was too focused on steering to talk with Mission Control.

Meanwhile, as Armstrong hunted for an impromptu landing site, the Eagle’s computer was blaring anerror code that neither Armstrong nor Buzz Aldrin recognized. In the last four minutes, five alarms had gone off in the module. They didn’t know it yet, but the guidance computer had crashed. Everything was in Armstrong’s hands.

He soon spotted a safer landing spot 500 meters away, beside a smaller crater that would come to be known as the Little West Crater. The astronauts landed with only45 seconds’ worth of fuel left in the tank. A separate engine and fuel tank would secure their lift-off 21 hours later, when they would ascend to rejoin the main spaceship and Michael Collins, the astronaut who stayed in orbit. But they had just barely stuck the landing.

Although the world watched live as the two Apollo 11 astronauts became the first people to stand on the moon, the only existing visuals of their hectic landing came from a camera mounted in Aldrin’s tiny window.

But the size of the window and angle of the camera meant nobody had ever seen the danger that Armstrong saw — until now.

On the 50th anniversary of the moon landing, NASA has created a new simulation of Armstrong’s view. 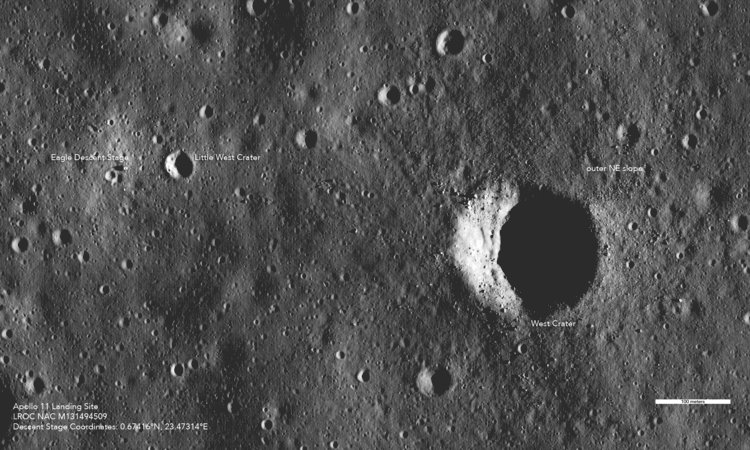 The original landing point, on the northeastern flank of the moon’s West Crater, seemed too rocky to Armstrong, so he steered the Lunar Module to the safer Little West Crater.NASA

The space agency usedfootage from NASA’sLunar Reconnaissance Orbiter (LRO), a spacecraft that’s been orbiting the moon since 2009, observing, collecting data, and looking for scientifically valuable sites to investigate later.

A team simulated the last 3 minutes and 7 seconds of the Apollo 11 moon landing using high-resolution images from LRO cameras, topography data, and the known Apollo 11 landing trajectory (based on callouts from the recorded audio).

At the beginning of the video, you can see the moon’s West Crater, which is over 620 feet (190 meters) in diameter, appear at the top. Then Armstrong directs the module right past it as mission control reads out altitudes and directions, regularly saying “looking good.”

When they finally get a landing confirmation from Armstrong, mission control admits that they’ve all been holding their breath: “You got a bunch of guys about to turn blue. We’re breathing again.”

The field of view in the simulation is limited for accuracy, since the lunar module’s windows were so small.

In the side-by-side comparison video below, you can see a similar shape in the actual footage from the camera in Aldrin’s window. The new simulation is on the left, while the real footage is on the right.

The simulation is not 100% accurate, however, since it uses images captured many years after 1969.

Armstrong, of course, saw only the untouched dust and rock of the lunar surface. As Aldrin described it: “magnificent desolation.”