A Tokyo restaurant chain has opened a small pub in one of the city’s busiest train stations, with a robot bartender serving drinks to commuters on their way home from work.

Called Zeroken Robo Tavern, the bar is located in Tokyo’s bustling Ikebukuro train station and is owned by Yoronotaki, a company that operates a chain of izakaya-style restaurants around the country. 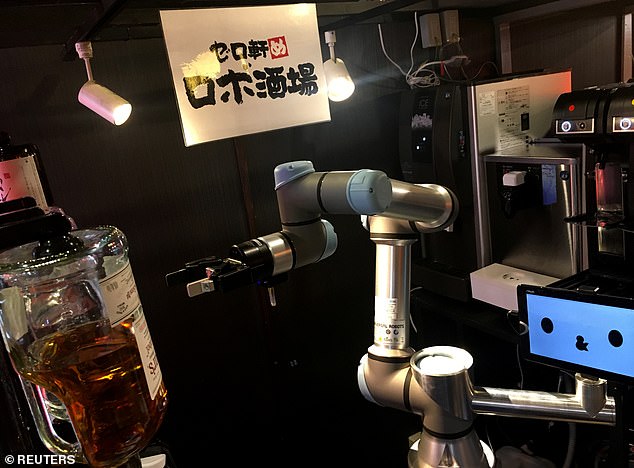 The Zeroken Robo Tavern in Tokyo’s bustling Ikebukuro Station has a robot bartender that can serve draft beer, sake, and mixed drinks

The small space opened on January 23 and will run until March 19, part of a pilot program run to see how customers respond to being served by a machine instead of a human.

Customers will first pay for their drinks at an automated payment kiosk.

They’ll receive a QR code receipt, which they present to the robot. After the robot scans the QR code it will go about preparing the drink.

It takes about 40 seconds to pour a glass of draft beer and a little under a minute to deliver a cocktail or mixed drink.

The robot also has a set of cameras built into its screen to monitor the emotional state of customers, tracking whether they’re happy or growing impatient.

The robot was designed by QBIT Robotics, which developed a similar robot arm server for a small takout pasta restaurant.

‘For robots, pasta, izakaya, and coffee are the same,’ QBIT’s Hiroya Nakano said. ‘You can do various things by changing cooking equipment.’ 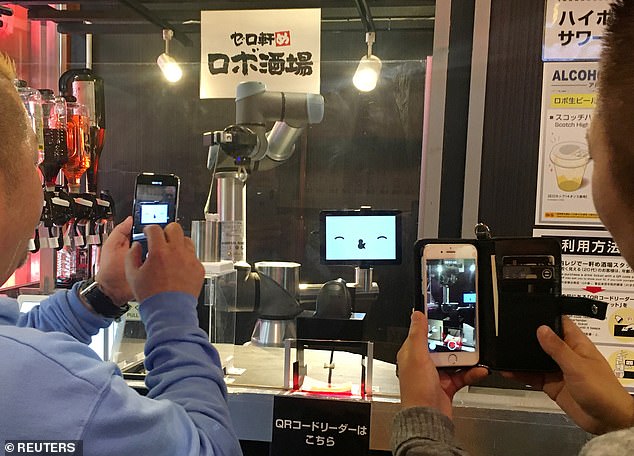 The robot bartender was developed by QBIT Robotics, which had previously used a similar machine in a takeout pasta restaurant

With around one-third of the country’s population over 65, worker shortfalls have become common in Japan.

In the healthcare industry, industry watchers expect worker shortages will reach 380,000 by 2025.

Yoronotaki decided to pursue the robotic bartender project in part because it could present a solution to the company’s recent challenges in maintaining a full staff.

‘The recent shortage of labor in the food service industry is a very serious problem, and our company is no exception,’ Yoronotaki’s Yukio Tsuchiya told Japan Top News.

The robot bartender costs around $82,000, the equivalent of around three years salary for an average bartender in Japan. 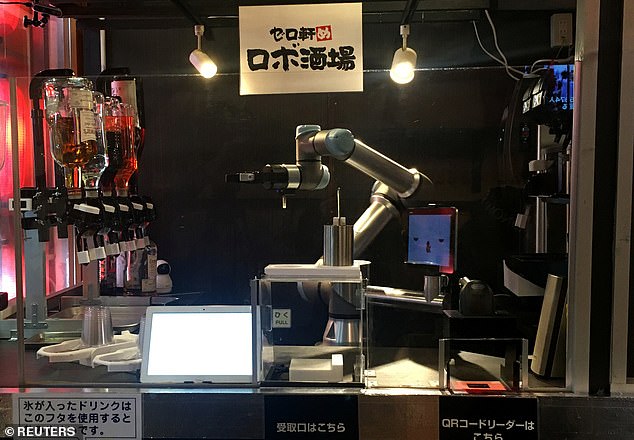 Customers pay for their orders at a kiosk and get a QR code receipt that they present to the robot, who’ll then commence making their drink

The initial response from customers has been generally positive.

‘I like it because dealing with people can be a hassle,’ Satoshi Harada told Retuters.

‘With this you can just come and get drunk. If they could make it a little quicker it would be even better.’

WILL ROBOTS TAKE YOUR JOB?

Claims made by an expert in artificial intelligence predict that in less than five years, office jobs will disappear completely to the point where machines will replace humans.

The idea that robots will one day be able to do all low-skilled jobs is not new, but Andrew Anderson from UK artificial intelligence company, Celaton, said the pace of advance is much faster than originally thought.

AI, for example, can carry out labor intensive clerical tasks quickly and automatically, while the latest models are also capable of making decisions traditionally made by humans.

‘The fact that a machine can not only carry out these tasks, but constantly learn how to do it better and faster, means clerical workers are no longer needed in the vast quantities they once were,’ Mr Anderson said.

For example, a machine can recognize duplicate insurance claims by knowing it has seen a phone number or an address before.

a, bartender, pub, robotic, With
You may also like: