What ARE the mysterious signals coming from deep space? AI analyzing telescope data discovers 72 new fast radio bursts from billions of light-years away

Scientists have detected dozens more mysterious signals emanating from deep space, thanks to the help of artificial intelligence.

Evidence of these strange signals has piled in over the last few years – but, scientists still aren’t quite sure what’s causing them. 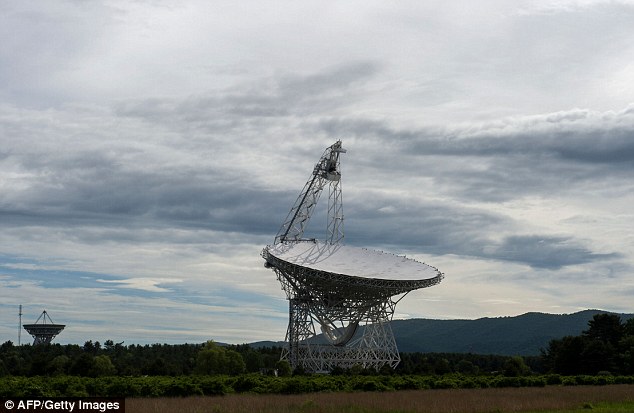 The latest batch of fast radio bursts was discovered in Breakthrough Listen’s 2017 data after applying the machine learning techniques.

The so-called ‘repeater,’ an object known more formally as FRB 121102, has baffled researchers for years.

It’s the only source known to emit repeated bursts, and is known to be situated in a galaxy 3 billion light years from Earth – but beyond that, it’s a mystery.

Some have proposed that the source may be highly magnetized neutron stars, while others have suggested an advanced alien civilization is to blame.

And, signals just keep streaming in.

Scientists discovered the 72 new signals after combing through 400 terabytes of data a second time. Initially, only 21 were found.

‘Not all discoveries come from new observations,’ said Pete Worden, Executive director of the Breakthrough Initiatives.

‘In this case, it was smart, original thinking applied to an existing dataset. It has advanced our knowledge of one of the most tantalizing mysteries in astronomy.’

To find additional FRBs, the researchers first trained a convolutional neural network to recognize these types of signals, then let it get to work on the huge dataset.

WHAT ARE FAST RADIO BURSTS AND WHY DO WE STUDY THEM?

Fast radio bursts, or FRBs, are radio emissions that appear temporarily and randomly, making them not only hard to find, but also hard to study.

The mystery stems from the fact it is not known what could produce such a short and sharp burst.

This has led some to speculate they could be anything from stars colliding to artificially created messages.

Scientists searching for fast radio bursts (FRBs) that some believe may be signals sent from aliens may be happening every second. The blue points in this artist’s impression of the filamentary structure of galaxies are signals from FRBs

The first FRB was spotted, or rather ‘heard’ by radio telescopes, back in 2001 but wasn’t discovered until 2007 when scientists were analysing archival data.

But it was so temporary and seemingly random that it took years for astronomers to agree it wasn’t a glitch in one of the telescope’s instruments.

Researchers from the Harvard-Smithsonian Center for Astrophysics point out that FRBs can be used to study the structure and evolution of the universe whether or not their origin is fully understood.

A large population of faraway FRBs could act as probes of material across gigantic distances.

This intervening material blurs the signal from the cosmic microwave background (CMB), the left over radiation from the Big Bang.

A careful study of this intervening material should give an improved understanding of basic cosmic constituents, such as the relative amounts of ordinary matter, dark matter and dark energy, which affect how rapidly the universe is expanding.

FRBs can also be used to trace what broke down the ‘fog’ of hydrogen atoms that pervaded the early universe into free electrons and protons, when temperatures cooled down after the Big Bang.

The new findings add important insight to their behaviour; according to the researchers, the data suggest the pulses are not received in a regular pattern.

Understanding their patterns – or lack thereof – can help scientists track down the elusive source spewing these signals from billions of light years away.

‘This work is only the beginning of using these powerful methods to find radio transients,’ said Gerry Zhang.

‘We hope our success may inspire other serious endeavors in applying machine learning to radio astronomy.’