The project used a series of sensors named ‘AudioMoth’ together with the AI to track the calls.

Forestry England worked with the Bat Conservation Trust on the project and the cheap microphones picked up the echolocation calls of eight different species.

It is hoped that by having easy and cheap access to the world of bats, experts can learn more about them as well as help protect them. 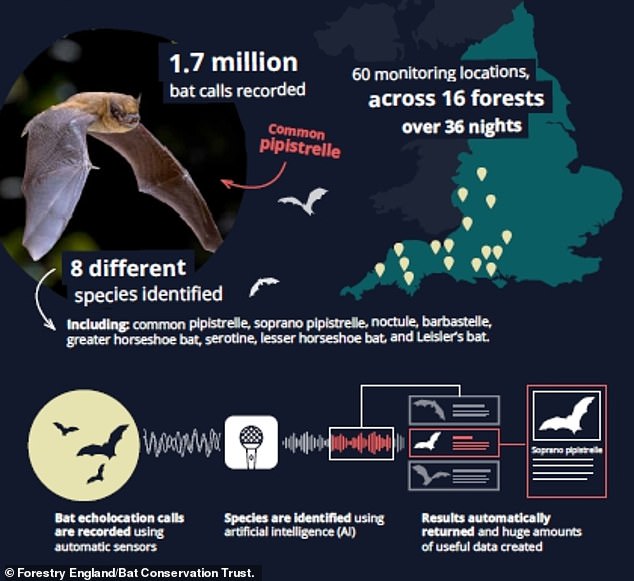 The study’s success is a vital step in understanding how rare woodland bat species are faring and to help safeguard their future, the Bat Conservation Trust said. Information on bats, a key indicator species, can also reveal how other wildlife are getting on, including their prey. It also suggests how healthy woodlands are overall 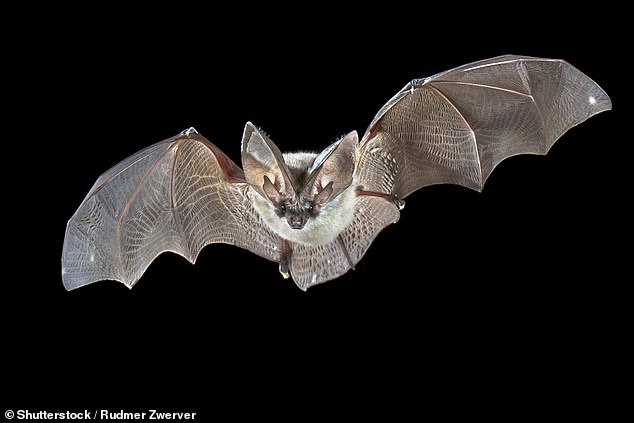 The organisations said the low cost and abilities of the ‘Audiomoth’ sensors meant large numbers could be left in the woods to record bat echolocation calls all night.

Wildlife and ecology staff at Forestry England set up 60 monitoring locations in 16 different forests across the UK in the summer of 2019.

A total of seven million sounds were identified as being potential bat calls, and the AI then narrowed this down to 1.7 million calls belonging to eight species.

Making large-scale surveying of bats cheaper and easier to run allows experts unprecedented insight into the world of the flying nocturnal mammals.

The study’s success is a vital step in understanding how rare woodland bat species are faring and to help safeguard their future, the Bat Conservation Trust said.

Information on bats, a key indicator species, can also reveal how other wildlife are getting on, including their prey. It also suggests how healthy woodlands are overall.

Wild vampire bats socially distance when they are sick by spending less time in their community, a new study suggests.

In the wild, US researchers injected bats with endotoxins, which stimulate an immune response, fixed them with proximity sensors and recorded their movements.

The sick creatures associated with fewer group mates, spent less time with others, and were less socially connected to healthy group mates, they found.

The experts say sickness-induced social distancing in animals does not require cooperation from others and is probably common across species.

‘With that wealth of data comes the potential for this approach to produce trends for some of our woodland bats for the first time.

‘For some of our rarest bats, gaining this information will be a vital step in understanding their status and securing their future.

‘It will also be possible to use the wider bat data as an indicator of the condition of woodland. We are delighted by what our collaboration has produced at this early stage.’

Andrew Stringer, head of environment at Forestry England, said:  ‘This pilot has been extraordinary.

‘It gave us more data than we’ve ever had to work with before and it is fantastic to see new technology being used for robust conservation science.

‘Monitoring and evidence are the bedrock of conservation efforts, and it is tremendously exciting to look to the future and how these methods might give us crucial insight into how bat populations are performing in the long-term.’

AI, hidden, reveals, trial, World
You may also like: