The World Health Organization (WHO) estimates 4.2 million people die every year due to outdoor air pollution, making it a bigger threat to human health than cigarette smoking, AIDS and tuberculosis.

Particulate matter is a mixture of solid and liquid particles in the air created by traffic, construction sites, burning fossil fuels, and other sources.

For at least two decades, the Air Quality Life Index (AQLI) has found that particulate matter pollution has reduced life expectancy worldwide by almost two years, compared to what it would be if air quality met WHO’s standards. 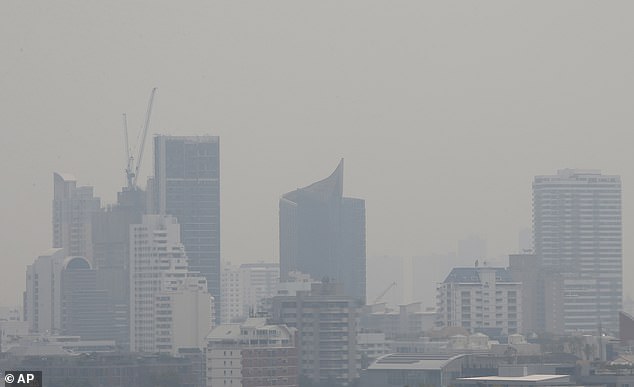 The Bangkok skyline on January 30, 2019. A new report indicates that despite efforts worldwide to improve air quality, pollution is responsible for shortening the global life expectancy by nearly two years

The problem is that progress made by concerned governments has been counterbalanced by worsening air pollution in other nations, according to economist Michael Greenstone, creator of the AQLI and director of the University of Chicago’s Energy Policy Institute.

Since 2013, China has reduced particulate pollution by nearly 40 percent.

But in Bangladesh, India, Nepal, and Pakistan – which, combined, are home to a quarter of the world’s population – pollution levels have risen 44 percent in the past 20 years. 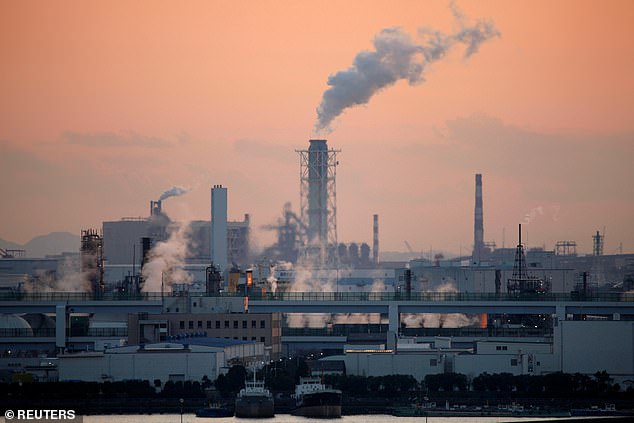 Efforts made by some countries are being offset by worsening conditions in other places.  While air pollution has declined in China 40 percent since 2013, it’s increased 44 percent in Bangladesh, India, Nepal, and Pakistan over the past two decades (Pictured: Factories near Tokyo)

Greenstone predicts residents of those countries could see their life expectancy decline by an average of five years.

Acknowledging the grave threat posed by COVID-19, he added that ’embracing the seriousness of air pollution with a similar vigor would allow billions of people around the world to lead longer and healthier lives.’

Instead global efforts to improve air quality are falling far short of the mark: More than half the world is being exposed to increasing amounts of air pollution, according to a recent report from the University of Exeter.

Researchers measured air quality trends worldwide between 2010 and 2016 and combined it with satellite imagery to provide annual air quality profiles for individual countries and regions.

In all, 55.3 percent of the world’s population was exposed to increasing levels of air pollution over the six-year window.

Some regions are now five times above safety levels for particulate matter.

Coronavirus lockdowns have led to some improvements in air quality, but the impact on particulate matter and ozone, the two pollutants most harmful to humans, has been minimal.

And people living in areas with poor air quality may be at higher risk of contracting the coronavirus.

According to a report in Science of The Total Environment, particulate matter can ‘carry’ COVID-19 through the air.

It may also make lung cells more susceptible to the virus, increasing the chances of more severe symptoms.

Viruses absorbed by particulate matter can remain ‘airborne for hours or days,’ according to the study’s authors.

In Italy, the areas hardest hit by COVID-19 also have significant air pollution. Lombardi and Emilia Romagna in northern Italy have heavy vehicle traffic, a lot of factories, and are surrounded by mountains that block adequate air flow.

Both regions also have higher mortality rates from COVID-19 than other parts of Italy, though scientists haven’t ruled out other factors at play.

WHAT CAN POLLUTION DO TO CHILDREN’S HEALTH?

CAUSE CHILDREN TO HAVE A LOW IQ: Researchers at the University of California, San Francisco, found in May 2019 that children born to mothers who live in polluted areas have an IQ that is up to seven points lower than those living in places with cleaner air.

CAUSE CHILDREN TO HAVE POORER MEMORY: Researchers at the Barcelona Institute for Global Health found boys exposed to greater levels of PM2.5 in the womb performed worse on memory tests by the time they are 10.

DELAY THE DEVELOPMENT OF CHILDREN: Youngsters who live less than one-third of a mile away from busy roads are twice as likely to score lower on tests of communication skills in infancy, found researchers at Eunice Kennedy Shriver National Institute of Child Health in April. They were also more likely to have poorer hand-eye coordination.

MAKE CHILDREN MORE ANXIOUS: University of Cincinnati scientists claimed pollution may alter the structure of children’s brains to make them more anxious. Their study of 14 youngsters found rates of anxiety was higher among those exposed to greater levels of pollution.

CUT YOUR CHILD’S LIFE SHORT: Children born today will lose nearly two years of their lives because of air pollution, according to a report by the US-based Health Effects Institute and the University of British Columbia in April 2019. UNICEF called for action on the back of the study.

RAISE A CHILD’S RISK OF AUTISM: Researchers at Monash University in Australia discovered youngsters living in highly polluted parts of Shanghai have a 86 per cent greater chance of developing ASD. Lead author Dr Yuming Guo said: ‘The developing brains of young children are more vulnerable to toxic exposures in the environment.’

CAUSE ASTHMA IN CHILDREN: Four million children around the world develop asthma each year because of road traffic pollution, a major study by academics at George Washington University estimated. Experts are divided as to what causes asthma – but exposure to pollution in childhood increases the risk by damaging the lungs.

MAKE CHILDREN FAT: University of Southern California experts found last November that 10 year olds who lived in polluted areas when they were babies are, on average, 2.2lbs (1kg), heavier than those who grew up around cleaner air. Nitrogen dioxide pollution could disrupt how well children burn fat, the scientists said.

Air, cuts, down, e, Life), pollution
You may also like: