Alien ships or satellites? Amateur astronomer captures footage of THREE ‘disc-shaped UFOs flying in formation’ in front of the moon

An amateur astronomer has captured strange footage of three UFOs appearing to fly in formation in front of the moon.

The footage shows a half moon with craters clearly visible on a cloudless night.

The camera wobbles slightly as three strange disc-shaped objects dart past – with conspiracy theorists suggesting they could be extra-terrestrial objects.

The user who posted the video speculates that the mysterious objects are just three balloons while others believe they could be meteors or satellites. 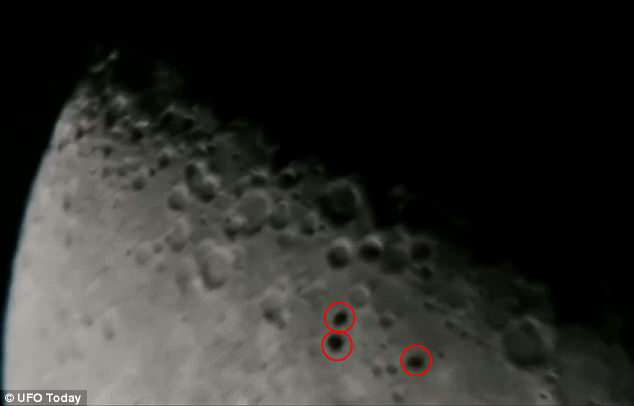 The camera wobbles slightly as three strange disc-shaped objects dart past. The user who posted the video speculates that the mysterious objects are just three balloons – but some conspiracy theories speculate otherwise

The baffling video, uploaded by Seattle-based ‘Don’t Stop Motion’, was filmed with a 4k camera and has been viewed more than 6,000 times.

‘So, I was filming the half moon on Sunday and caught something weird passing in front of it’, the user posted.

Two of the objects appear to fly close together and the third one lags slightly behind.

‘At 1:18 in, 3 objects cross the moon. I THINK it’s some helium balloons someone must’ve released, but can’t confirm,’ wrote the uploader in the video description.

Some users suggested the shapes could be space rocks.

‘Bottom one and the one to the right seem to be shadows of something… meteor maybe?’ wrote user Wheelori814.

The video sent other viewers into a spin, with some speculating that this peculiar footage could be something extraterrestrial.

‘If its legit, than i don’t think those were balloons, why would they send 3 balloons at close range into orbit?’ wrote another YouTube user Moridin. 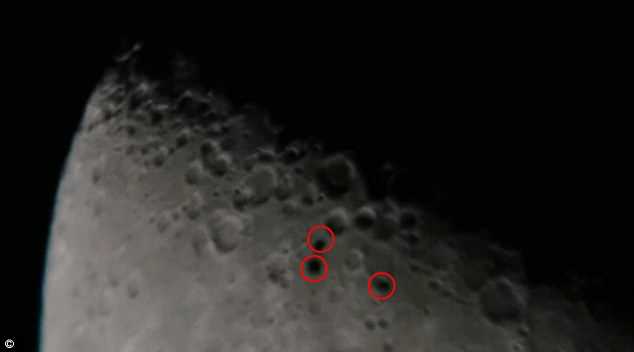 The baffling video, uploaded by ‘Don’t Stop Motion’ was filmed with a 4k camera and has been viewed more than 6,000 times 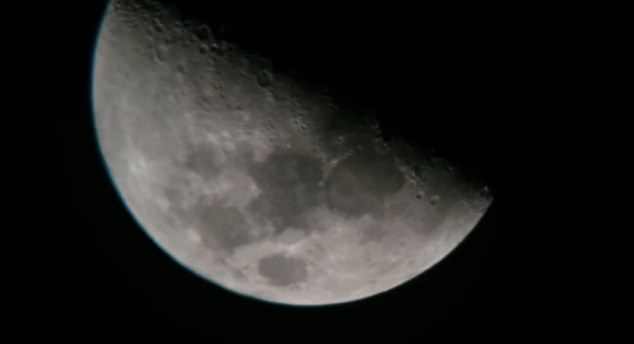 The video sent viewers into a spin, with some speculating that this peculiar footage could be something extraterrestrial

WHAT MAKES SOMEONE BELIEVE IN CONSPIRACY THEORIES?

Over the course of three online-based studies, researchers at the University of Kent showed strong links between the belief in conspiracy theories and certain psychological traits.

Narcissism and self-esteem levels have a large impact on a persons belief in conspiracy theories.

The results showed that people who rated highly on the narcissism scale and who had low self-esteem were more likely to be conspiracy believers.

However, while low self-esteem, narcissism and belief in conspiracies are strongly linked, it is not clear that one – or a combination – causes the other.

But it hints at an interesting new angle to the world of conspiracy and those who reinforce belief.

There are widely believed to be three main reasons as to why people believe in conspiracy theories.

These three things tie in with the previously stated qualities and combine to create an avid conspiracy theorist.

‘There’s a chance they would collide and they would have to be very near the moon to show their shadows on it. It must be something else…’ the user wrote.

Other users suggested they could be birds while YouTube user Ryan W commented: ‘Shadows from a passing by satellite maybe?’

‘At first sight it looks like three UFOs, or at least their shadows, passing over the moon’, Mr Watson said.

‘Rather than satellites, asteroids or space junk I think these are images of birds flying between the camera and the moon.

‘The giveaway is that they flying in formation and there is a slight wobble to their appearance, which is probably due to their wings flapping’, he said.

Mr Watson said that when the camera is focused on the moon, intervening objects are out-of-focus, meaning things like birds or insects appears as blurry blobs or discs reminiscent of classic flying saucers.

‘For the time-being no tinfoil hats need to be deployed!’ he said.

This is not the only strange lunar object to spark rumours about possible UFOs.

Last month conspiracy theorists claimed a triangular-shaped UFO was ‘proof’ of an air base on the moon.

This is not the only strange lunar object to spark rumours about possible UFOs. Last month conspiracy theorists claimed a triangular-shaped UFO was ‘proof’ of an air base on the moon

Captured with a high-powered telescope, the shots appear to show a gigantic, black, triangular shape against the backdrop of the moon’s rocky surface.

UFO believers have been sent into a frenzy, with some claiming this is proof of an air base on the barren satellite.

The strange footage was posted by conspiracy YouTube channel Secure Team 10, who say the image is the shadow of a ‘craft’ hovering over the surface of the moon.

‘You can tell that this is a shadow because you can see the shadow wrapping around the craters’, the narrator of the footage said.

‘This was emailed to me by not only an amateur astronomer, but a guy who was the CEO of a corporate jet fleet in Texas.’

Sceptics argue the moving blob is merely a shadow cast by a craggy formation on the surface.