Amazon is 2nd US company to reach $1 trillion market value

Amazon is 2nd US company to reach $1 trillion market value

Amazon has become the second publicly traded company to be worth $1 trillion, hot on the heels of Apple.

Shares of the e-commerce giant climbed roughly 2% in mid-morning trading on Tuesday to hit an all-time high of $2,050.50.

This briefly pushed its market cap past the magic $1 trillion mark, before the stock settled lower at $2,035.54 in afternoon trading. 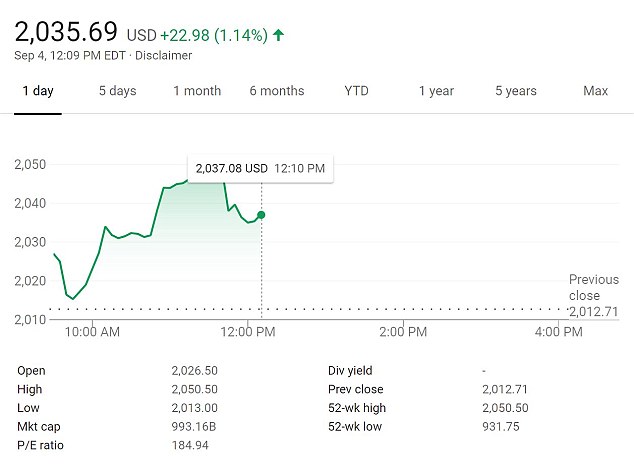 Shares of the e-commerce giant climbed roughly 2% in mid-morning trading on Tuesday to hit an all-time high of $2,050.50. That was just enough to push it past the $1 trillion mark

HOW BIG IS AMAZON?

Amazon now accounts for an astonishing 49 percent of every e-commerce dollar in the United States.

With a $1 trillion valuation, it’s now worth more than the combined market caps of Best Buy, Macy’s, Nike, Starbucks and dozens of other retail giants.

The tech behemoth’s stock has risen more than 73 percent so far this year.

Its stock now accounts for over 35 percent of the S&P 500’s total return this year.

Amazon is now the second company to hit the historic valuation, following in the footsteps of Apple, which hit a $1 trillion market cap in August.

However, it took Amazon far fewer trading days to get there than it did for Apple.

Amazon’s market cap jumped from $600 billion to $1 trillion in a mere 165 trading days, according to the Wall Street Journal.

By comparison, Apple rose from a $900 billion valuation to $1 trillion in 183 trading sessions.

‘Apple is basically a one product company nowadays; Amazon is anything but.’

Amazon, founded in 1994, has rapidly grown from its humble beginnings as an online bookseller to a multinational corporation with reach in an ever-expanding number of industries, ranging from groceries and advertising to consumer hardware.

But cloud computing, part of its Amazon Web Services unit, has quickly become one of its biggest cash cows.

Amazon has landed several lucrative contracts with companies and government organizations that have allowed it to enjoy high-powered growth year after year. 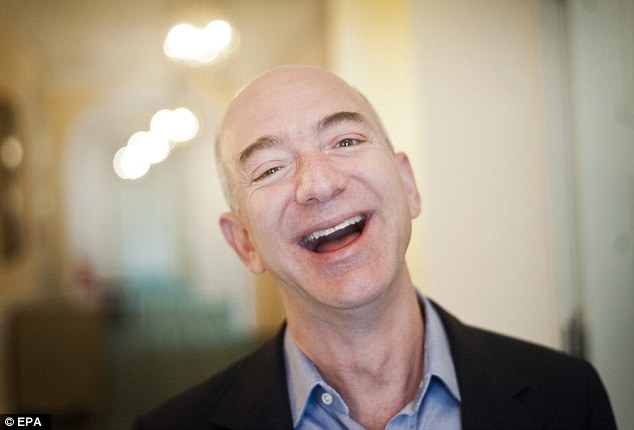 Amazon has become the second publicly traded company to be worth $1 trillion after Apple. The company’s blowout success has made CEO, Jeff Bezos, No.1 on Forbes’ billionaires.

The company’s blowout success made its founder and CEO, Jeff Bezos, No. 1 on Forbes’ billionaires list this year.

In the last decade, Amazon has revolutionized how people shop online and has risen to become the world’s dominant internet retailer.

The Seattle-based company has cemented customer loyalty through smart devices like Alexa and the Prime membership program that offers fast, free shipping as well as music and video streaming perks.

The company was initially incorporated as ‘Cadabra’ by Jeff Bezos in 1994 and backed with money borrowed from his parents. 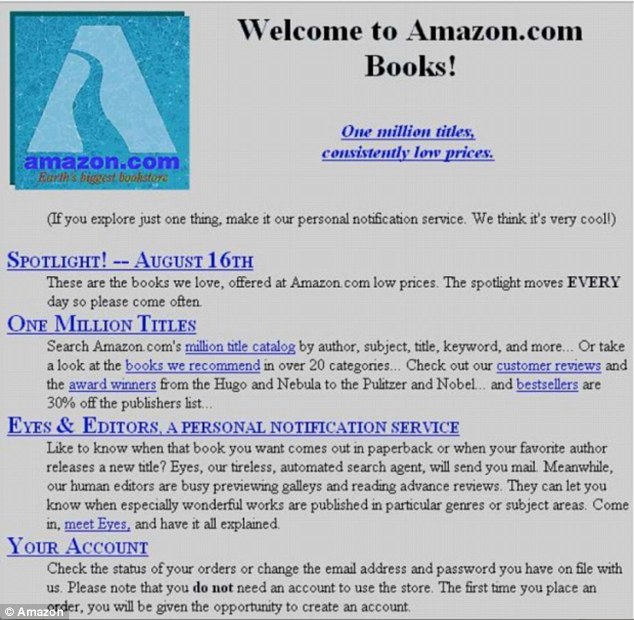 The firm, founded in 1994, has rapidly grown from its humble beginnings as an online bookseller to a multinational corporation with reach in an ever-expanding number of industries, ranging from groceries and advertising to consumer hardware 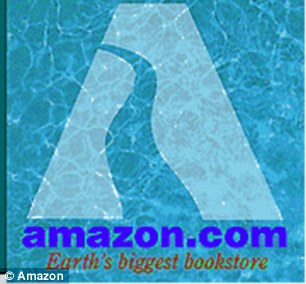 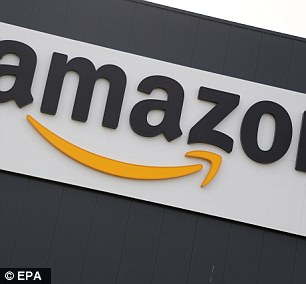 The company initially incorporated as ‘Cadabra’ by Jeff Bezos in 1994. Pictured is the 1995 Amazon logo next to the company’s current logo

Created in a garage in a suburb of Seattle, Washington, the company renamed ‘Amazon’ sold its first book — Fluid Concepts and Creative Analogies: Computer Models of the Fundamental Mechanisms of Thought by Douglas Hofstadter — to a computer engineer in mid-1995.

By the end of that year, Amazon was selling books online throughout the US. Amazon went public in early 1997.

The company for more than a decade put growth over profit, investing heavily in warehouses, distribution networks, and data centers.

‘Every cent they made they put back in the company,’ Enderle said of Amazon.

‘They kept their eye on the prize, which was initially to take over most of commerce.’ 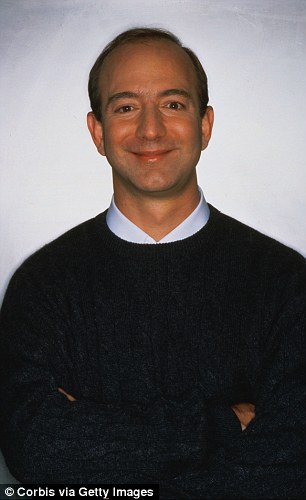 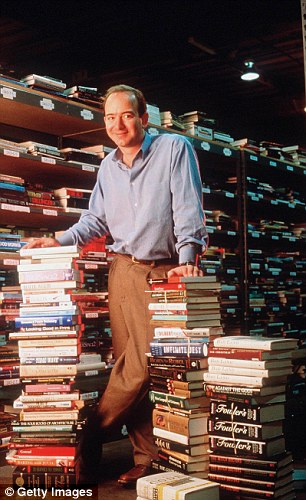 Created in a garage in a suburb of Seattle, Washington, the company renamed ‘Amazon’ sold its first book — Fluid Concepts and Creative Analogies: Computer Models of the Fundamental Mechanisms of Thought by Douglas Hofstadter — to a computer engineer in mid-1995

The founder and chief executive also avoided scandals or other distractions, keeping revenue and costs close enough to manage and easing into “adjacent markets” that play into Amazon strengths or interests, according to Enderle.

For example, Amazon Web Services cloud computing business is a lucrative business built on technology infrastructure that the company needed to run its own operations.

Investing in warehouses, trucking, drones, shipping and other distribution systems not only enables Amazon to drive down costs they position the company to compete with the likes of FedEx and UPS.

THE TRILLION DOLLAR RISE OF AMAZON

The first book sold on Amazon was ‘Fluid Concepts and Creative Analogies: Computer Models of the Fundamental Mechanisms of Thought’ by Douglas Hofstadter.

1994: Jeff Bezos incorporates what would become Amazon under the name ‘Cadabra Inc.’ He later re-named the company under its current name.

1995: Amazon opens up shop as a bookstore. The first book sold on Amazon was titled ‘Fluid Concepts and Creative Analogies: Computer Models of the Fundamental Mechanisms of Thought’ by Douglas Hofstadter.

2000: The firm introduces its now-famous logo, which features a curved arrow leading from A to Z, with an arrow shaped like a smile. The logo is meant to suggest that Amazon sells every kind of product from A to Z.

In 1998, Jeff Bezos began selling more than just books on Amazon. It ventured into consumer electronics, music, movies, video games, toys and many other products

2001: Amazon turns a profit for the first time ever, proving to investors that the firm’s business model could stick.

2002: The company launches Amazon Web Services (AWS) as a service for internet traffic data, but it would go on to grow into the firm’s cloud computing behemoth.

2006: Amazon rolls out Fulfillment by Amazon, its massive logistics unit that now threatens the likes of UPS and FedEx.

In 2006, Amazon rolled out Fulfillment by Amazon, its massive logistics unit

2007: Amazon releases the first Kindle e-reader, in a move that was perceived as  a disruption to the traditional publishing industry.

2014: Amazon launches the Fire phone, meant to be a competitor to the iPhone, which ends up flopping. The firm discontinued the device a year later.

2015: Amazon launches the original Echo speaker, a groundbreaking device, due to its speech recognition and AI capabilities.

2017: Amazon becomes the first streaming company to earn an Oscars nomination for the drama ‘Manchester By the Sea.’

Later that year, Amazon announced it would purchase Whole Foods for $13.7 billion. The move has only strengthened its stronghold over the retail market.

In the past quarter, Amazon posted its best-ever profit of $2.5 billion as Bezos, whose Amazon stake has made him the world’s richest person, highlighted the importance of the digital assistant Alexa that powers Amazon electronics along with cars, appliances and other connected devices.

According to the research firm eMarketer, Amazon’s e-commerce revenue will grow more than 28 percent this year to reach $394 billion, and will account for 49 percent of US online retail sales and nearly five percent of all retail spending.

One of Amazon’s revenue drivers is its Prime subscription service which offers streaming video and music, free delivery and other perks and which has more than 100 million members worldwide.

There are no extra COVID-19 vaccines doses left to send to states, despite Trump's health officials promising to release more 3 days ago

Parents' sleep doesn't return to normal for up to six years

Spectacular fossil of an eight-foot ancient shark found in Germany