Amazon has created a shopping trolley which tracks what a customer is picking from the shelves and automatically takes payment without the need for checkouts.

The contraption, called Dash Carts, uses cameras, sensors and a scale to automatically detect what shoppers drop in.

They will first show up at a new Los Angeles supermarket which Amazon is opening later this year.

Cashiers will be present in the store, but the Jeff Bezos-owned tech giant said it wanted to give shoppers a way to bypass any lines. 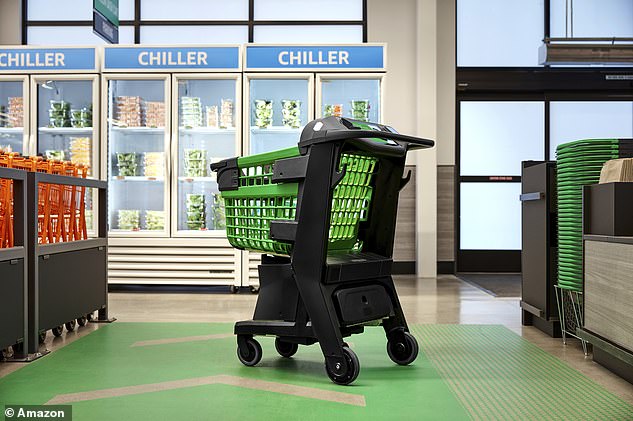 Dash Carts (pictured) use cameras, sensors and a scale to automatically detect what shoppers drop in. Payment will be taken automatically via the card registered to the shopper’s Amazon account

The cart uses it assortment of sensors to keep a tally of items and then charges the shopper’s Amazon account when they leave the store.

Shoppers wanting to use the new shopping trolleys will need to have an Amazon account and a smartphone.

A QR code on the cart must be scanned in the Amazon app, in a similar way to unlocking Bird scooters or Lime bikes.

The user’s account will then sync with the trolley and bring up any shopping lists from Alexa.

Despite the plethora of technology squashed into the humble shopping trolley, Amazon has made them look as bog-standard as possible.

According to Dilip Kumar, Amazon’s vice president of physical retail and technology, this is deliberate.

‘We try to hide that complexity away from customers so you don’t have to learn any new shopping behaviours,’ he said, CNBC reports.

‘Once you’re signed in with your phone, you can put the phone away and your normal way that you shop stays the same.’

It’s the latest attempt by Amazon to shake up the supermarket industry and offer a solution to long checkout lines.

The online shopping giant has already opened a cashier-less supermarket in Seattle that uses cameras and sensors in the ceiling to track what shoppers grab and charge them as they leave.

Amazon is building a lab to test employees for coronavirus

Amazon is building its own lab to test a small number of employees for the coronavirus, as cases have been confirmed in at least 10 of its US warehouses.

The firm has a team of ‘Amazonians’ with a variety of skills ranging from research scientists to procurement specialists and software engineers to help with the initiative.

However, the e-commerce giant is unsure how many tests it will produce, but is willing to share its findings with others.

The new lab is part of an effort to combat testing shortages, and the company hopes to regularly test all employees.

The Dash Carts could later be used in conjunction with these stores or at Amazon´s Whole Foods grocery chain.

Amazon could also sell the technology to other retailers, if it wished to. However, the company says there are no plans for either right now.

Several startups are already making similar smart shopping carts that are being tested in stores, but many require scanning groceries before dropping them in.

Whereas the Amazon cart does not require any scanning and a screen near the handle lists what’s being charged.

Amazon also claims that the system is able to detect when something is taken out and have it removed from the bill.

There’s also a way to let the cart know if you need to throw a jacket or purse in the cart so you don’t have to carry it around.

Amazon has tried to consider all nuances of supermarket shopping and included the facility to add fresh produce, which comes with a four-digit code that can be inputted on the cart’s display.

It even has its own coupon scanner to ensure any thrifty shoppers get their full array of discounts.

Amazon, cart, Shopping, t, unveils
You may also like: