Was it a temple? Was it a larder? Archaeologist baffled why ancient humans built a massive ‘mammoth house’ out of thousands of mastodon bones over 20,000 years ago

British scientists examining a site in Russia dated the bones to 20,000 years ago, when Palaeolithic hunter-gatherers lived in the harsh frozen environment.

About 70 of these structures are known to exist in Ukraine and the west Russian Plain, but this is the oldest discovered.

Researchers say the bones were most likely sourced from animal graveyards, and the circle was then hidden by sediment. It is now one foot below current surface level. 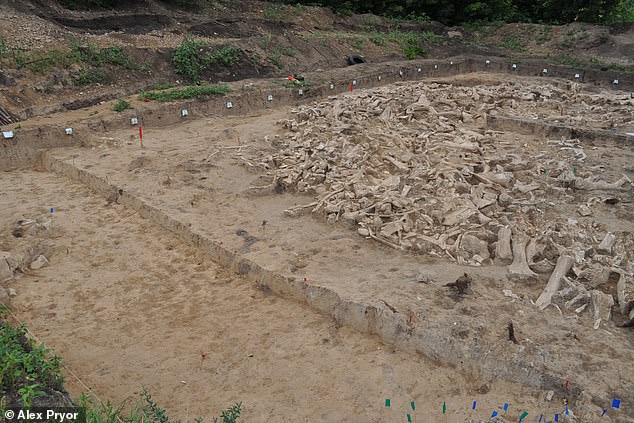 The majority of the bones found at the site investigated, in the Russian Plains, are from mammoths. A total of 51 lower jaws and 64 individual mammoth skulls were used to construct the walls of the 30ft by 30ft structure and scattered across its interior 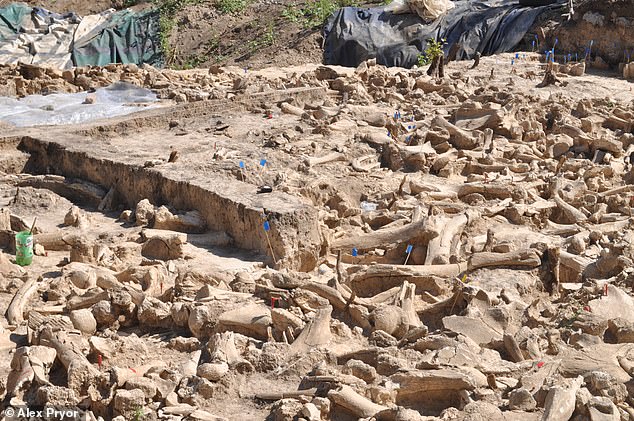 Previously, archaeologists have assumed the circular mammoth bone structures were used as dwellings, but the new study suggests this may not always have been the case

A total of 51 lower jaws and 64 individual mammoth skulls were used to construct the walls of the 30ft by 30ft structure and scattered across its interior.

For the first time, the archaeologists from the University of Exeter found remains of charred wood and other soft non-woody plant remains within the circular structure near the modern village of Kostenki, about 310 miles south of Moscow.

They say this indicates people were burning wood as well as bones for fuel, and the communities who lived there had learned where to forage for edible plants.

Dr Alexander Pryor, who led the study, said the Kostenki 11 site represents a rare example of Palaeolithic hunter-gatherers living on in this harsh environment.

Climate reconstructions indicate at the time summers were short and cool and winters were long and cold, with temperatures around -4 degrees F or colder.

Most communities left the region, probably because of lack of prey to hunt and plant resources they depended upon for survival, scientists say.

‘What might have brought ancient hunter gatherers to this site’ in the first place?, Pryor said, while considering the unlikely frozen location.

‘One possibility is that the mammoths and humans could have come to the area en masse because it had a natural spring that would have provided unfrozen liquid water throughout the winter – rare in this period of extreme cold.

‘These finds shed new light on the purpose of these mysterious sites.

‘Archaeology is showing us more about how our ancestors survived in this desperately cold and hostile environment at the climax of the last Ice Age.

‘Most other places at similar latitudes in Europe had been abandoned by this time, but these groups had managed to adapt to find food, shelter and water.’ 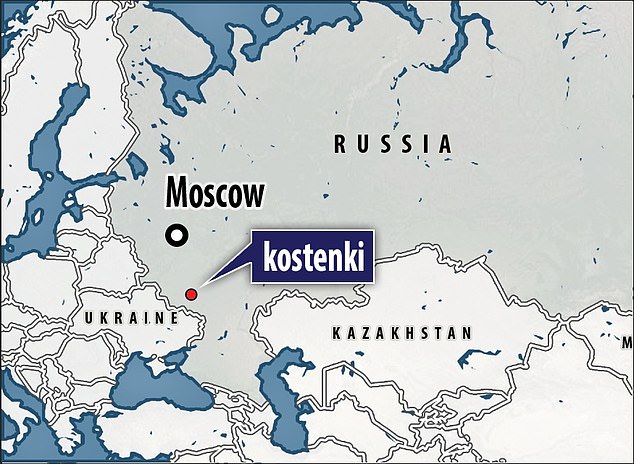 For the first time, the archaeologists from the University of Exeter found remains of charred wood and other soft non-woody plant remains within the circular structure near the modern village of Kostenki, about 310 miles south of Moscow 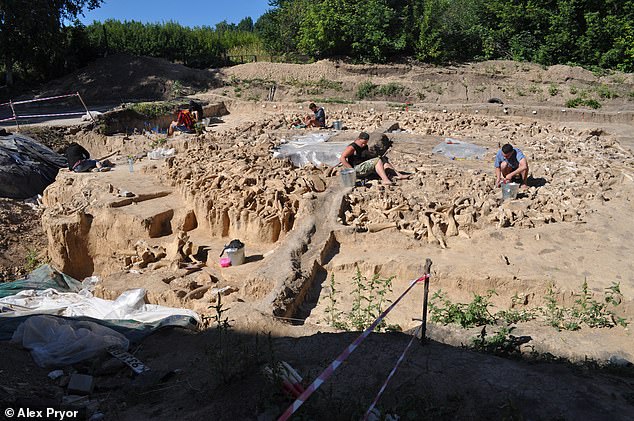 For the first time, the archaeologists from the University of Exeter found remains of charred wood and other soft non-woody plant remains within the circular structure near the modern village of Kostenki, about 310 miles south of Moscow

Bone circles were eventually also abandoned as the climate continued to get colder and more inhospitable.

Previously, archaeologists have assumed the circular mammoth bone structures were used as dwellings only.

The new study suggests this may not always have been the case as the intensity of activity at Kostenki 11 appears less than would be expected from a long term site.

Other finds include over 300 tiny stone and flint chips just a few millimetres in size.

This is likely debris left behind by the site’s inhabitants as they knapped stone nodules into sharp tools with distinctive shapes.

They would have been used for tasks such as butchering animals and scraping hides.

The research has been published in the journal Antiquity.

HOW DID STONE AGE HUNTERS DEAL WITH ICY TEMPERATURES IN BRITAIN 11,000 YEARS AGO?

Stone Age hunter gatherers in Britain 11,000 years ago were far more resilient to extreme cold weather than scientists previously thought, according to a recent study.

Experts found that a dramatic drop in temperatures, severe enough to halt woodland development, had no substantial impact on human activity at Star Carr.

Prehistoric dwellers at the middle Stone Age archaeological site, which dates to around 9,000 BC, persevered through a cold snap that lasted more than 100 years.

The study sheds new light on debate surrounding the sensitivity of hunter-gatherer societies to environmental change, suggesting they were hardier than assumed.

Researchers at Royal Holloway, University of London, and the University of York examined items found at the site, around 23 miles (37 km) north-east of York.

The rich archaeological record gave scientists the rare opportunity to compare the climate record, discovered through analysis of ancient peat taken from core samples, with evidence of human activity.

These artefacts are evidence of the continued productivity and endurance of people at Star Carr throughout the years of extreme cooling, which saw average temperatures drop by more than 3°C (5.4°F) in the space of a decade.

They found pioneering early modern humans who lived at site at the end of the last ice age carried on with life as usual, despite plummeting temperatures.

Speaking to MailOnline, researcher Nicky Milner said: ‘This was a time before farming, before pottery, before metal. People were living by hunting and gathering for their food

‘However, they were still highly skilled and could build houses, had axes to chop down trees and could make boats.

‘Despite the climate change, they seem to have carried on living much the same as they had done previously – hunting the same animals and living by the side of the lake, which presumably provided them with various resources.’

ancient, Bon, built, Eerie, humans
You may also like: