Newly analyzed fossils from Antarctica may represent an extinct species of giant bird with a wingspan of more than 20 feet.

By comparison the largest modern-day bird, the wandering albatross, has a wingspan of just 11 feet and six inches.

Researchers examining a fossil foot bone and a preserved jaw fragment determined the species lived longer ago than assumed and was bigger than the largest known birds on record – fossils were uncovered in the 1980s but sat unexamined for decades.

A 50-million-year-old fossil of a foot bone from a pelagornithid, a member of an extinct group of giant birds.  The avian predators patroled the oceans with wingspans of up to 21 feet, dwarfing the 11½-foot wingspan of today’s largest bird, the wandering albatross

They were part of a trove of specimens collected by University of California paleontologists on Seymour Island, off the northernmost end of the Antarctic Peninsula, in the mid-1980s.

Peter Kloess first came across the fossils in 2015, when he arrived at UC Berkeley as a Ph.D. candidate in Integrative Biology.

‘I love going to collections and just finding treasures there,’ Kloess said. ‘Somebody has called me a museum rat, and I take that as a badge of honor. I love scurrying around, finding things that people overlook.’

Reviewing the original notes, Kloess determined a fossil of a foot bone, known as a tarsometatarsus, was far older than originally thought – from about 50 million years ago rather than 40 million. 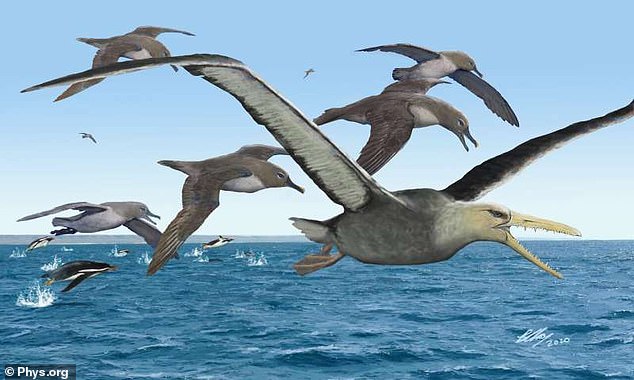 The pelagornithid (center) soared over Earth’s oceans more than 40 million years ago. With wingspans of over 20 feet, they may be the largest flying bird ever 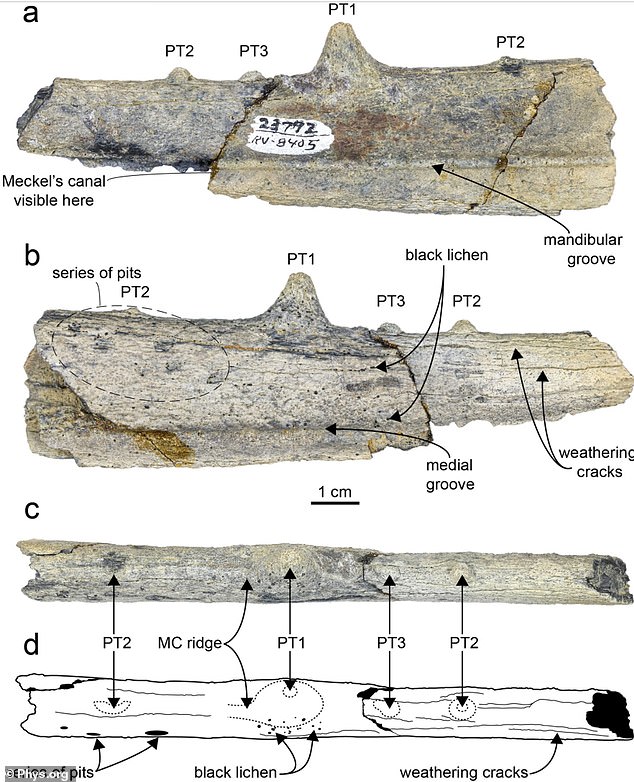 An intact section of a pelagornithid’s lower jaw from about 40 million years ago. The bony protrusions on the jaw, known as pseudoteeth, would have been up to an inch tall when the bird was alive and its skull up to two feet long

During that period, known as the Eocene, Antarctica had a much warmer climate and was home to numerous mammals and birds, including early relatives of the sloth, ostrich and penguin.

Pelagornithids were part of that ecosystem for more than 10 million years, according to a study published Monday in the journal Scientific Reports.

It’s believed the birds, whose wingspans reached  21 feet, could fly over the ocean for weeks at a time.

‘In a lifestyle likely similar to living albatrosses, the giant extinct pelagornithids, with their very long-pointed wings, would have flown widely over the ancient open seas, which had yet to be dominated by whales and seals, in search of squid, fish and other seafood,’ said co-author Thomas Stidham of the Institute of Vertebrate Paleontology and Paleoanthropology in Beijing.

Their size puts them at the upper limit of how large a bird can get and still fly, according to Smithsonian magazine, making them a good candidate for the largest birds to ever get off the ground. 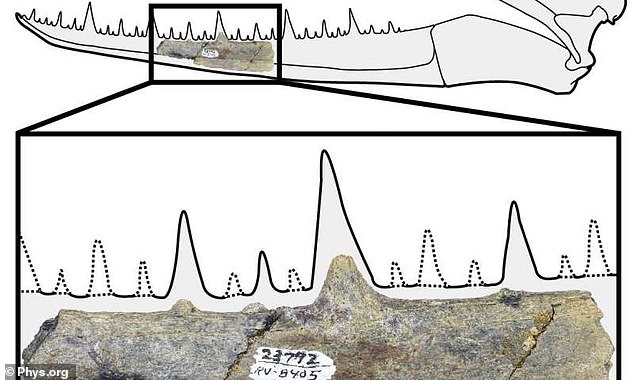 Pelagornithids are often known as ‘bony-toothed’ birds but, in reality, their pseudoteeth acted more like fingernails, helping them snatch squid and fish from the water

A fossil from a smaller pelagornithid dates from 62 million years ago, but the foot fossil indicates these larger varieties arose just after life rebounded from the mass extinction that killed off the dinosaurs 65 million years ago.

The last known pelagornithid is from 2.5 million years ago, when an ice age began on Earth.

Because of the sharp-looking projections on their jaws, pelagornithids are often known as ‘bony-toothed’ birds.

In reality, the protrusions, known as pseudoteeth, didn’t aid with chewing – they were more like fingernails, helping the birds snatch squid and fish from the water.

The pseudoteeth on the lower jaw examined by Kloess and his colleagues dates from about 40 million years ago.

‘These bony-toothed birds would have been formidable predators that evolved to be at the top of their ecosystem,’ Stidham said.

According to Kloess, the new discoveries illustrate ‘that birds evolved to a truly gigantic size relatively quickly after the extinction of the dinosaurs and ruled over the oceans for millions of years.’