US insurer Anthemreported an impressive $24 billion in operating revenue in Q1 2019, up 9% year-over-year (YoY) from $22 billion in 2018, thanks to the addition of over 1 million new members. Anthem’s revenue hike comes as the payer gears up to launch a proprietary primary benefit manager (PBM), dubbedIngenioRx. 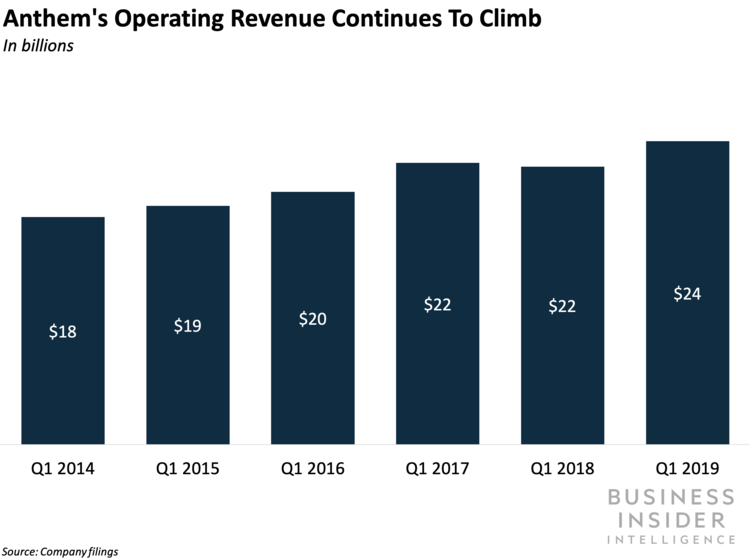 The payer will starttransferring members to its PBM at the beginning of May, per Forbes. For context, PBMs are the middlemen of the pharmaceutical industry, responsible for negotiating the costs of drugs for health plans.

Here’s what it means: Anthem’s move into the PBM market could be lucrative — and its sheer size could be a massive aid in kicking off the initiative.

The US PBM market is worth around$423 billion, offering Anthem a ripe revenue opportunity. And as the second largest US insurer — Anthem counted nearly 41 million members as of Q1 2019 — Anthem has ample traffic to funnel through IngenioRx, which could help get its fledgling PBM off the ground.

Anthem estimates that IngenioRx will save the company$4 billion annually once all members are successfully transitioned. Moreover, in-house PBMs have paid dividends for Anthem’s competitors. For example, UnitedHealth Group named its PBM arm, OptumRx, as a majordriver of its revenue growth in Q1 2019: OptumRx revenuesincreased to nearly $18 billion in Q1 2019, up almost 11% YoY from $16 billion in Q1 2018.

The bigger picture: Anthem’s move to roll out IngenioRx won’t come without challenges.

1. Sign up for the Digital Health Briefing to get it delivered to your inbox 6x a week. >> Get Started

2. Subscribe to a Premium pass to Business Insider Intelligence and gain immediate access to the Digital Health Briefing, plus more than 250 other expertly researched reports. As an added bonus, you’ll also gain access to all future reports and daily newsletters to ensure you stay ahead of the curve and benefit personally and professionally. >> Learn More Now

SEE ALSO:THE DIGITAL HEALTH ECOSYSTEM: An in-depth examination of the players and tech trends reshaping the future of healthcare