A new patent reveals that a highly anticipated addition to the Apple Watch could come in a form no one expected.

According to a patent granted today, Apple is interested in adding a camera to its so-far camera-less watch, or more accurately, to the device’s wristband.

As first reported by 9to5Mac, the idea seems to entail placing a camera module in a inside the tail end of the wrist band which would be flexible enough to point in a desired direction.

Using a poseable wristband, Apple may be able to solve one of the biggest problems with its Apple Watch.

WHAT DOES APPLE’S CAMERA PATENT REVEAL?

In a new patent granted to Apple, the company is considering adding a camera to its watch’s wristband.

The camera would be poseable, allowing wearers to position and frame their shots.

A patent reveals that the company will also mull adding not one, but two cameras that could help captured 360-degree video and make the device easier to use.

Once the module is positioned and a user is ready to take a picture, one could either ‘pinch’ a section of the wristband, give a verbal command — presumably powered through iOS voice assistant, Siri —  or press a button fixed to the watch’s side according to the patent.

To help maintain its shape, Apple is also mulling outfitting the its wristband with a poseable ‘core’ filled with metal, fluid, or other mechanical features.

‘In some embodiments, the extension portion of the camera watch band may maintain its form after being manipulated and released by a user, to maintain a user-set camera orientation relative to the rest of the smartwatch,’ reads the patent.

To shake things up even further, Apple is also apparently considering adding not one, but two optical sensors to its wristband, allowing users to shoot pictures ‘selfie’ style and even capture 360-degree video.

As is the case with all patents, Apple’s plans for its watch are still just an idea, but according to the filing date of the wristband-mounted camera — it was filed originally in 2016 — the company has had time to chew it over. 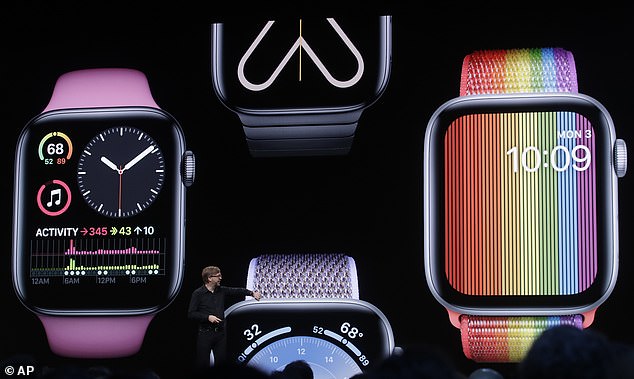 Apple, like many companies, has struggled with declining sales of its iPhones across the world.

It may seem crazy that one of Apple’s flagship products has yet to be equipped with a camera, one of the biggest selling points of mobile phones, but loading the Apple Watch — or any wearable for that matter — up with a camera has come with several challenges.

Among them: where exactly would the company mount a camera.

Installing a camera on the face of the watch, though the most obvious spot, would essentially kill a wearers ability to take front-facing picture, lacking the ability to see the display and frame the picture.

The recent patent appears to solve that solution and more, which could prospectively make an Apple Watch less of a companion and more of a viable sit-in for its iPhone.

It’s worth noting that Apple has already been suffering from a substantial decline in the sale of its iPhone’s, hitting a 30 percent drop year-over-year in April — a statistic that could add pressure on the company to provide its customers more value.

ap, Apple, camera, considering, in
You may also like:

Perseid meteor shower tonight: Can I still see the Perseids?