Apple has been accused of removing the Taiwanese flag from its emoji keyboard for iPhone users in Hong Kong and Macau – both regions are claimed as provinces of China by the country.

Users in the regions were quick to report that the Taiwanese flag had disappeared from their phones after the recent update to Apple iPhone Software iOS 13.1.1 – despite no change to the emoji keyboard detailed in the update notes.

Taiwan is an independently run democracy. Apple has reportedly ‘blocked’ the Taiwanese flag for users of its iPhone in mainland China since 2017. 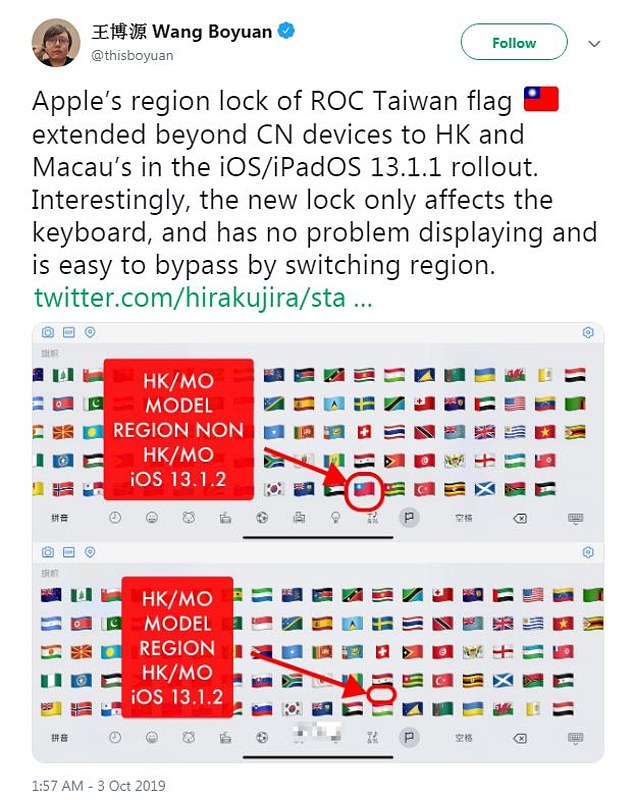 ‘Interestingly, the new lock only affects the keyboard, and has no problem displaying and is easy to bypass by switching region.’

Mail Online has contacted Apple for comment on the apparent censorship and claims of corporate subservience. 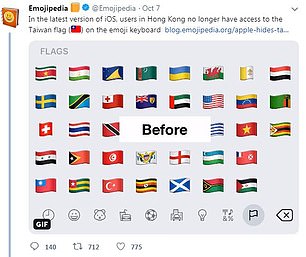 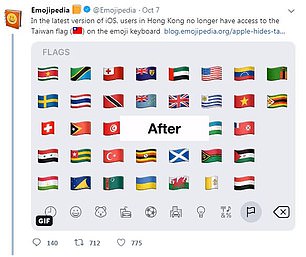 Emojipedia tweeted: ‘In the latest version of iOS, users in Hong Kong no longer have access to the Taiwan flag on the emoji keyboard’

The allegations come as Hong-Kong continues to experience pro-democracy protests and other corporations are accused of bowing to China’s demands in order to keep its large population as a consumer base.

Yesterday the NBA came under fire for its response to a tweet by a Houston Rockets official in support of Hong Kong protests for democracy – as some accused the league of being a ‘puppet of Beijing and craven to the lucrative Chinese market’.

Houston Rockets’ general manager, Daryl Morey, apologized on Monday for the tweet he swiftly deleted over the weekend that included an image of the activists’ rally cry: ‘Fight for freedom, stand with Hong Kong.’ 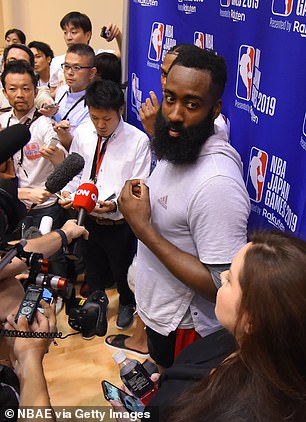 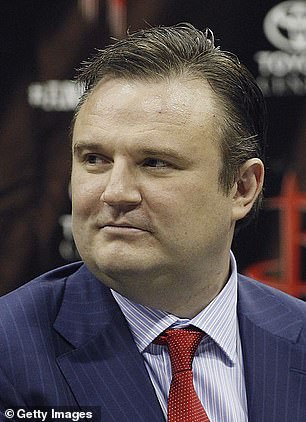 His support for the protests in the Chinese-ruled city angered Beijing, Chinese fans and the team’s business partners in a key NBA market.

Following the reaction from China, the NBA said in a statement it recognized Morey’s views ‘deeply offended many of our friends and fans in China, which is regrettable’.

However, the NBA’s attempt to diffuse the situation resulted in fans, as well as Texas Senator Ted Cruz and Democratic presidential candidate Beto O’Rourke, lashing out.

The U.S. lawmakers argued that the NBA’s response was shameful and showed how China was using its economic power to censor speech by Americans in the United States. 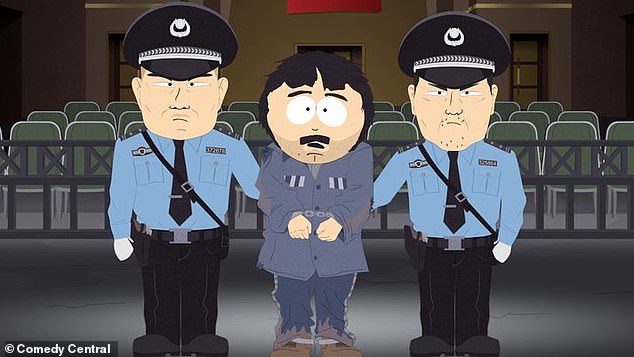 An episode of South Park titled ‘Band in China,’ which pokes fun at American companies who bow to strict Chinese censorship laws, resulted in the Comedy Central show being scrubbed from the internet in China 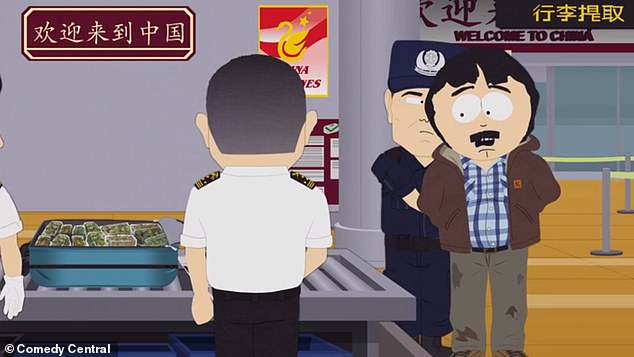 In the plot from the episode last Wednesday, Randy (right) gets arrested carrying marijuana into China, frustrating his plans to sell weed

Rockets star James Harden on Monday apologized to China as the team and the NBA were forced into defensive mode when China’s state broadcaster yanked Rockets games from the air and sponsors abandoned them.

‘Like the NBA, we welcome the Chinese censors into our homes and into our hearts,’ the show’s creators wrote in a statement posted on Twitter. 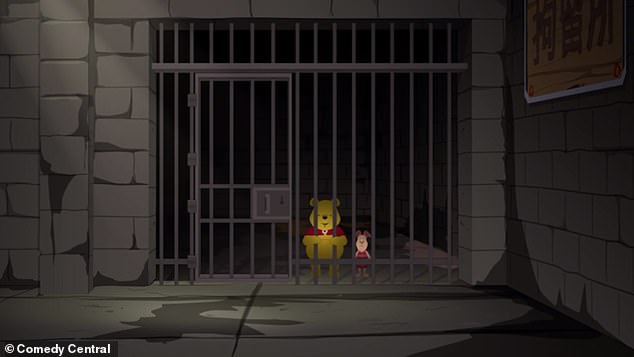 He is then sent to a work camp, where he sees Winnie the Pooh and Piglet, who are imprisoned because the bear was used to mock Chinese President Xi Jinping

‘We too love money more than freedom and democracy, they wrote, adding: ‘Xi doesn’t look just like Winnie the Pooh at all.’

The message, which urges the audience to tune into Comedy Central, ends with the line: ‘Long live the Great Communist Party of China! May this autumn’s sorghum harvest be bountiful! We good now, China?’

Users in mainland china, Macau, or Hong Kong can still access the flag by typing Taiwan – a Taiwanese flag will appear in the predictive function- or setting their phone’s region to elsewhere.

accused, Apple, is, of, removing, t
You may also like: