Archaeologists Could Help Bring Otters Back From the Dead

From 1969 to 1971, the United States was testing nuclear weapons beneath one of Alaska’s Aleutian Islands, worryingly close to some of the world’s few surviving sea otters. The subterranean explosions prompted conservation managers to carry out a daring plan.

First, they netted some Alaskan sea otters. Then they set 59 free off the coast of Washington State and 93 more near Oregon. This was part rescue mission, part homecoming. Before fur traders hunted them to the brink of extinction, sea otters used to bob and roll up and down North America’s Pacific Coast, gobbling down sea urchins and helping to maintain waving towers of kelp.

In Washington, the transplants took. But within a few years the Oregon otters vanished. “The biggest question is: What happened to Oregon?” said Shawn Larson, a conservation biologist at the Seattle Aquarium, because the answer could inform transplantation efforts.

One hypothesis holds that the otters simply swam off, heading back north. But another explanation, advanced in 2008, suggests that the cold water-adapted Alaskans died out because they were too different from Oregon’s original pre-fur trade otters. Scientists divide sea otters into northern and southern subspecies, each adapted to its own habitat. If the state’s ancient otter inhabitants were more closely related to the southern subspecies, maybe sea otter reintroduction efforts along that stretch of coast should instead work with animals from Californian populations.

A technique borrowed from the science of human archaeology may answer this conservation question. New research published Wednesday in Proceedings of the Royal Society B suggests that the northern subspecies had long settled along the Oregon coast.

“Our recommendations are that actually Alaskan or other northern populations would be appropriate,” said Hannah Wellman, a graduate student in anthropology at the University of Oregon who led the study. The research compiled the most comprehensive genetic data set yet of Oregon’s original sea otters.

To understand which otters had once lived there, the team turned to otter teeth found in two archaeological sites in northern Oregon associated with the Clatsop and Tillamook groups. Their goal was to extract genetic sequences from the specimens. 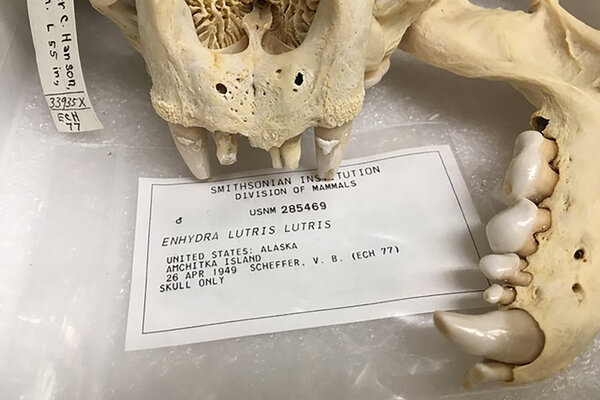 These otters were hunted or traded well over a thousand years ago, long before European contact and the maritime fur trade, and the results of the analysis show it. “We have a lot more genetic diversity in these two adjacent sites than we do in modern sea otters,” said Courtney Hofman, a molecular anthropologist who extracted ancient DNA from the teeth at the University of Oklahoma.

To complement that finding, the team also reached out to the Smithsonian in Washington, D.C. for a few rare sea otter specimens from the waning days of the fur trade when otters became increasingly scarce.

Barred from any analysis that would destroy the samples, the researchers settled on giving those preserved otters the equivalent of a dentist visit. They scraped calculus off the teeth, then carefully extracted the small percentage of otter DNA in that calculus.

Combined with previous studies, genomic sequences from both time periods show that both northern and southern sea otter populations once called Oregon’s coastline home. Perhaps the region was once a genetic way station, allowing interbreeding up and down the Pacific Coast, says Dr. Larson, who did not participate in the current work. And that implies that Alaskan otters can be used for reintroduction programs.

Ms. Wellman says she plans to share her data with the Elakha Alliance, a nonprofit organization supported by the Confederated Tribes of Siletz Indians and the Coquille Indian Tribe. The group’s goal is to bring back Oregon’s otters — and the towering kelp forests they tend — for good.

This past February, the U.S. Fish and Wildlife Service funded a feasibility study by the Elakha Alliance, the first in a long series of evaluations and steps that could ultimately bring back Oregon’s sea otters.

Dr. Larson, who is helping write that assessment, says she plans to incorporate the new analysis of Oregon’s past otter diversity. Perhaps reintroductions can bring in both Californian sea otters to the state’s southern shores, and Alaskan otters farther north.

“Then as the populations grow, they’ll merge, and now we’ll have a connected group that is basically continuous from southern Oregon all the way up to Russia,” she said. “Which would be awesome.”

Genetics and Her, oregon, otters
You may also like: