More than one million people have now signed up to a Facebook group encouraging people to descend on Area 51 in Nevada to uncover any potential alien secrets. The Facebook group in question is called “Storm Area 51, They Can’t Stop All of Us”, which states: “We will all meet up at the Area 51 Alien Center tourist attraction and coordinate our entry. If we naruto run, we can move faster than their bullets. Let’s see them aliens.” The event is set to take place on September 20, but if previous attempts are anything to go by, the public should steer well clear of the military base.

On January 28, an unnamed man drove through a security checkpoint at Mercury, some 70 miles north of Las Vegas, as he attempted to get into Area 51.

A car chase quickly ensued for eight miles, when the suspect exited his car and approached Nevada National Security Site (NNSS) officers with a “cylindrical object” in hand, according to an NNSS statement.

The man failed to adhere to officers’ requests to stop, and was promptly shot dead at the scene.

The incident should be a stark warning to those planning on rushing Area 51, with US Air Force personnel warning that necessary force will be taken. 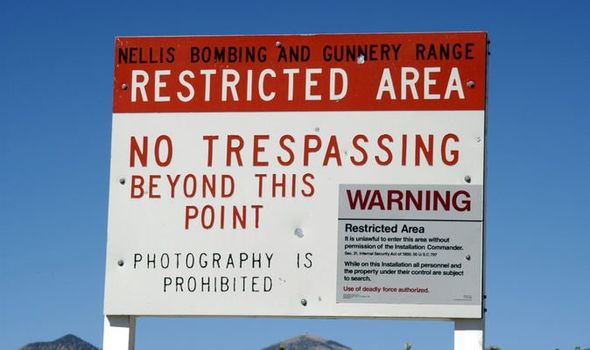 Air Force spokeswoman Laura McAndrews said: “Area 51 is an open training range for the US Air Force, and we would discourage anyone from trying to come into the area where we train American armed forces.

“The US Air Force always stands ready to protect America and its assets”.

However, organisers of the page have insisted the event is a joke, and have no plans on storming Area 51.

Facebook user Jackson Barnes wrote in the discussion page: “Hello US government, this is a joke, and I do not actually intend to go ahead with this plan. 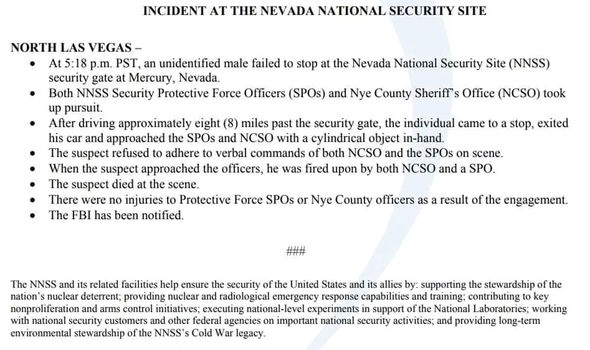 “I just thought it would be funny and get me some thumbsy uppies on the Internet. I’m not responsible if people decide to actually storm area 51.”

Area 51 has been used by American aviation authorities since 1955 and is closed off to those without top-level security clearance.

However, the US government did not even admit the base existed until 2013, in a series of documents released as part of a Freedom of Information request, and it is heavily protected by armed guards.