These space rocks, which orbit uncomfortably close to our planet, were spotted just once by scientists.

Researchers were unable to continue tracking them, which means they have no way of knowing if they are on a collision course with Earth.

Despite fears they could smash into Earth, experts say there is a ‘low chance’ of of surprise near-Earth asteroids causing damage. 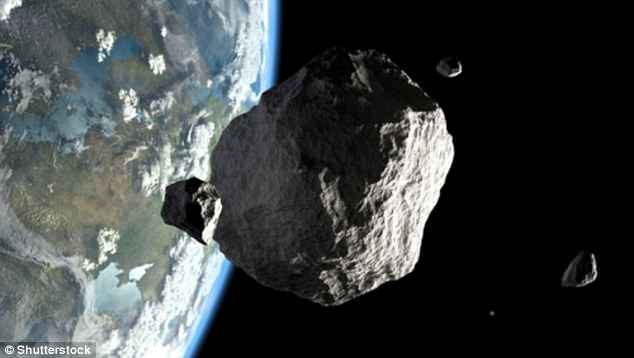 So far, astronomers have spotted more than 8,000 near-Earth asteroids that are at least 460 feet (140 meters) wide.

This is large enough to wipe out an entire city.

Between 2013 and 2016, 17,030 NEAs were listed by the International Astronomical Union’s Minor Planet Centre in Cambridge, Massachusetts.

Of these, 11 per cent – nearly 1,900 – were labelled ‘initially unconfirmed’, meaning they were observed a few times but not enough to pin down their orbit.

In a new study, researchers at the Minor Planet Centre combed through the data to find out why astronomers lost track of so many of the objects.

They discovered that astronomers were often too slow to track their orbits.

NEAs are typically picked out by asteroid survey systems that use telescopes powered by artificial intelligence to scan large swathes of the night sky. 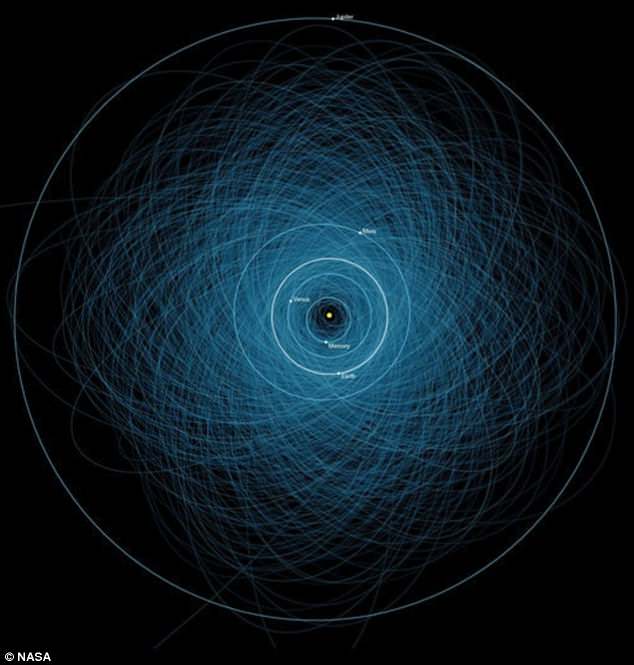 Each of these space rocks, which orbit uncomfortably close to our planet’s own trajectory, had been spotted once but scientists have not continued tracking them. Pictured is a visualisation of the orbits of 1,400 near-Earth asteroids released by Nasa in 2014

These systems then submit their findings for confirmation from a secondary source, and the researchers found that a delay between these two readings is often the reason NEAs are lost.

Some telescopes take more than 20 hours to report potential NEAs, making them almost impossible to spot again and confirm.

‘Tomorrow, that object could be on the other side of the sky, and nobody really knows where it will be.’

To make their finding the team looked at data from some of Earth’s most prolific asteroid hunting systems, including Pan-STARRS, the Catalina Sky Survey, the Dark Energy Survey, and the Space Surveillance Telescope.

They studied the influence of telescope positions and motion, brightnesses of objects, submission delays between sources, and more.

The team also analysed the size of each potential-NEA based on the brightness of their initial readings, finding that 900 were likely asteroids.

The largest of the lost rocks appears to measure a few kilometres across, Dr Vereš told New Scientist.

For comparison, the asteroid that wiped out the dinosaurs is believed to have measured around 6.2 miles (10km) across.

One hundred and two of the unconfirmed NEAs were larger than 140 metres making them ‘potentially hazardous.’

Dr Vereš added that regardless of how close the objects get it is unlikely they would be large enough to destroy Earth.

‘We believe that the largest ones – planetary killers larger than one kilometer – those are basically all found,’ the astronomer told New Scientist.

‘I would say the danger is coming from objects we haven’t discovered yet,’ he said.

900, asteroids, Astronomers, Earth, Lost, near, nearly, track
You may also like: