A young blacktip reef shark has been found dead after getting stuck inside a bag that was left to float in the ocean.

The animals’s head passed through a hole in the sack but it then became snared around the doomed shark’s body.

It is believed the animal died after becoming unable to swim and pass water over its gills to receive oxygen and tragically drowned.

The shark was found in the waters of Thailand’s idyllic Maya Bay on the island of Koh Phi Phi Ley, made famous by Leonardo DiCaprio’s 2000 film, The Beach. 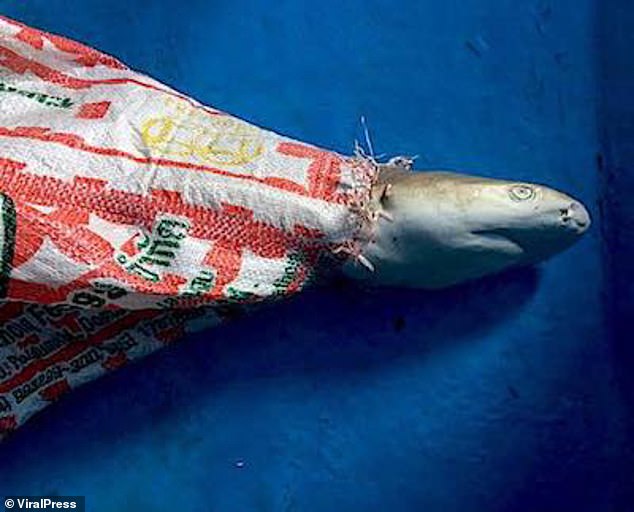 Thailand’s idyllic Maya Bay on the island of Koh Phi Phi Ley was the scene and has become the latest location to showcase the devastating impact plastic pollution is having on marine wildlife. The animal was stuck inside a canvas sack that was previously used to store rice

Diving instructor Andrew Hewett found the stranded creature floating in the waters around Maya Bay at the weekend.

It is believed the canvas sack was once used to sell rice before being discarded.

After becoming lodged inside the bag the shark was unable to swim and eventually drowned.

The tragedy comes just weeks after it was discovered that dozens of blacktip reef sharks swimming in the area for the first time since it was closed to the public in May.

Wildlife officials are now investigating the incident and are also continuing their efforts to reduce the negative impact of tourism on the local wildlife population.

Worapot Lomlim, chief of Hat Noppharat Thara-Mu Koh Phi Phi National Park, said: ‘We have been notified about this. I have ordered officers to investigate to see if the shark was caught or if it became stuck inside the bag by itself.

‘A lot of blacktip reef sharks have been found in Maya Bay during the ongoing closure of the area.’ 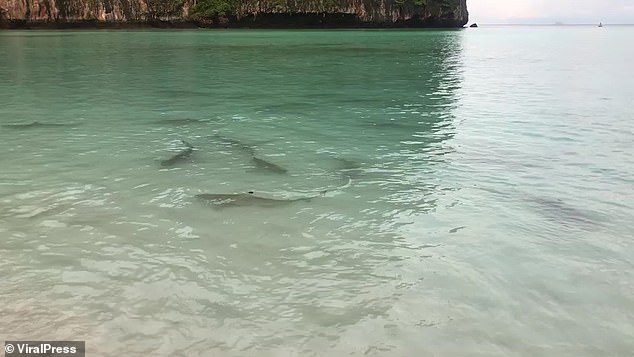 Marine biologist Dr Thon Thamrongnawasawat said Maya Bay was starting to recover since the beach had been closed to the public earlier this year.

However, last month officials extended the ban and closed the beach indefinitely.

‘When she went into the bag, she was struggling to go forward. But the bag didn’t fall off, slowly killing her.

‘Look at her eyes, you will know how curious she is, it’s like she’s asking why she has to die. This image indicates very clearly how much garbage hurts the sea.

‘The bag may have floated from the island, from the shore, or from the land that is away from the sea and came by river.

‘Where’s the bag from? I can’t answer that, but I can say that the bag killed the shark.’

Blacktip reef sharks can grow up to 5 feet (1.5 metres) long and they prefer shallow water and are often found in the Indian and Pacific Oceans.

Black, Juvenile, reef, Sha, tipped
You may also like:

Life after death: Man opens up about going to hell – ‘They were screaming and bleeding’