Follow
Home » Science » Bananas are on the brink of EXTINCTION

Bananas are on the brink of EXTINCTION

Bananas are on the brink of EXTINCTION as devastating tropical disease spreads across crops worldwide, researchers warn

Should the infection reach South America, researchers warn the Cavendish banana – the species most commonly sold and consumed worldwide – could face extinction.

Cavendish bananas are genetically identical to one another, which allows Panama disease to rapidly decimate entire harvest yields.

Some five billion Cavendish bananas are eaten each year in the UK alone.

Salvation for banana crops could come in the form of a rare Madagascan tree, which grows an unpalatable, wild species of banana that is immune to Panama disease.

Plant biologists are rushing to create a hybrid of the two species of banana in the hope of creating a infection-resistant strain. 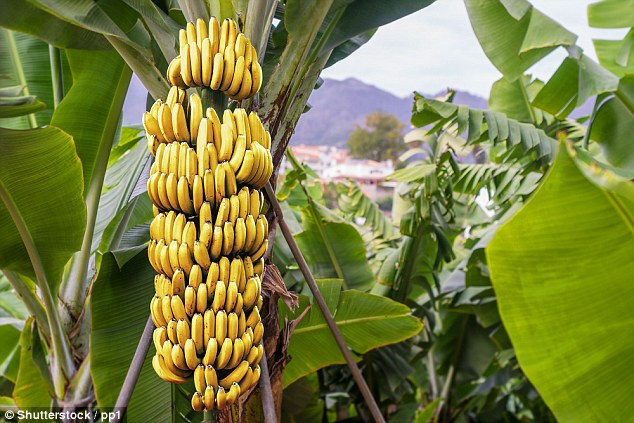 The humble banana is facing potential extinction as a killer disease threatens to destroy the humble yellow fruit. Salvation for bananas could come in the shape of a rare Madagascan tree, where an unpalatable, wild species of banana is growing that is immune to Panama disease

There are only five Madagascan banana trees in existence.

Richard Allen, senior conservation assessor at the Royal Botanic Gardens at Kew, told the BBC that the rare disease-resistant species (Ensete perrieri) has certain traits which make it more durable than the Cavendish banana.

The climate in Madagasca is believed to have played a role in creating a banana that has evolved to have an innate tolerance to drought and disease.

‘It doesn’t have Panama disease in it, so perhaps it has genetic traits against the disease,’ Allen said.

‘We don’t know until we actually do research on the banana itself, but we can’t do the research until it’s saved.’

On an expedition to the island off the coast of Africa, scientists from the Royal Botanic Gardens found only a handful of the plants remain in existence.

WHAT IS PANAMA DISEASE?

Panama is a fungal disease which attacks the roots of a banana plant.

It originated during the 1950s in Panama and spread to neighbouring Central American nations Costa Rica, Nicaragua, Honduras and Guatemala.

The disease, caused by the fungus Fusarium oxysporum f.sp. cubense, wiped out the Gros Michel banana variety which was exported from Central America to the United States.

A particular strain, tropical race 4, is regarded as a threat to Cavendish bananas growing mainly in tropical far north Queensland.

Unlike the Cavendish banana, which is what is grown commercially and eaten worldwide, the Madagascar banana produces seeds and is distasteful.

It is thought that combining the two strains of banana could produce a best-of-both scenario, with the hybrid being both edible and durable.

The Madagascar banana grows on the edge of forests, where it is vulnerable to the climate.

Damage from severe weather, as well as logging, forest fires and deforestation for farmland are all endangering the Madagascan plant.

As a result, it has now been listed on the official Red List of the IUCN (International Union for Conservation of Nature). 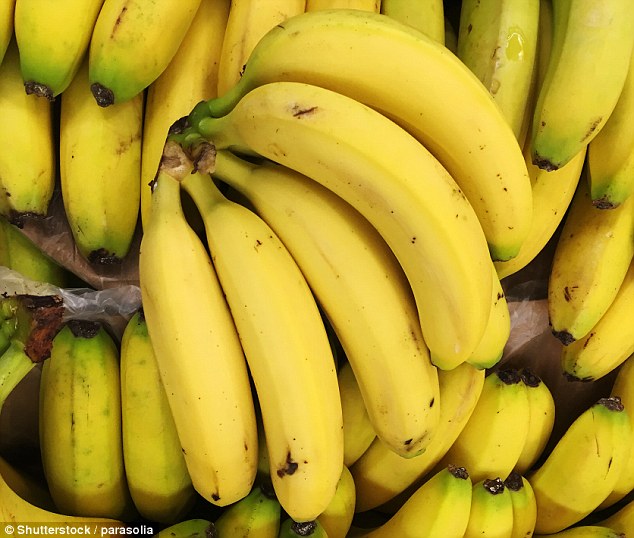 Biologists are rushing to create a hybrid between the Cavendish banana and the Madagascar banana in the hope of creating a super-banana. It is thought that combining the two types could produce a best-of-both scenario, with the hybrid being both edible and durable

WHAT IS THE HISTORY OF THE CAVENDISH BANANA?

The Cavendish banana is currently the world’s main commercial crop.

It was first grown in large volumes by the Peak District stately home of Chatsworth house.

According to folklore, Chatsworth’s first head gardener, Joseph Paxton was inspired to grow a banana by one he saw depicted on Chinese wallpaper in a bedroom at Chatsworth.

For nearly a hundred years the story was thought to be a myth, as nobody could find the painted banana.

Joseph Paxton was successfully growing bananas at Chatsworth by 1835 after obtaining one from Mauritius.

There was great excitement at Chatsworth in November 1835 when the banana plant flowered. By the following May, it was loaded with more than 100 fruit.

Within a few years, he had enough plants to offer them to enthusiasts from all over the country.

The banana variety known as Gros Michel was initially the world leader and had the edge until the Second World War.

But the Dwarf Cavendish had certain characteristics which gave it an advantage.

The one property which enabled the Cavendish variety to take the crown as top banana was its greater resistance to disease.

The Gros Michel was virtually wiped out worldwide by Panama disease, also known as banana wilt, caused by a fungus.

Within a decade, the Dwarf Cavendish and its varieties had become the main commercial crop around the globe. 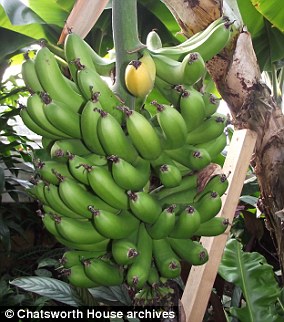 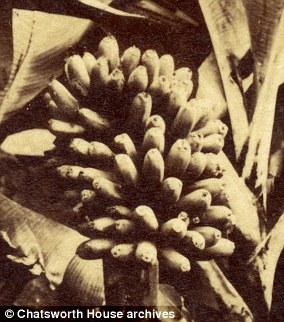 The Cavendish banana is currently the world’s main commercial crop. It was first grown in large volumes by the Peak District stately home of Chatsworth house in the 19th century (right) and is still grown there today (left)

‘It is very important to conserve the wild banana because it has large seeds which can offer an opportunity to find a gene to improve the cultivated banana,’ she said.

Dr Gert Kema, expert in global plant production at the Wageningen University in the Netherlands, told MailOnline: ‘Cavendish is now collapsing and there is nothing to replace it.On top of that many local cultivars – or varieties – are equally susceptible.’

Halting exports bananas from affected countries could be one way to help curb the spread of disease.

Cavendish bananas are named for the family of the house they were first grown in – Chatsworth House in Derbyshire.

Steve Porter, Head Gardener at Chatsworth, told MailOnline: ‘We are hopeful that the work being done by scientists around the world to find a cure for the disease threatening the Cavendish banana will be successful.

‘We’re proud of the banana’s heritage at Chatsworth and still grow them in our greenhouses so any development that can safeguard the future of the Cavendish banana for future generations is very welcome.’

In the 1950s, Panama disease devastated a type of banana known as the ‘Gros Michel’ (often known as Big Mike).