Follow
Home » Science » Being addicted to sunbathing may be genetic, study finds

Being addicted to sunbathing may be genetic, study finds

Sun-loving people have the same ‘risk-taking’ genes that lead to smoking, promiscuity and drugs, study finds

The craving to bask in the sun and soak up the rays might be genetic, scientists say.

Researchers have found genes associated with addiction, behaviour and brain function which are linked to a penchant for sunbathing.

They are also the same five risk-taking genes which lead people to experiment with drugs, smoking and even multiple sexual partners. 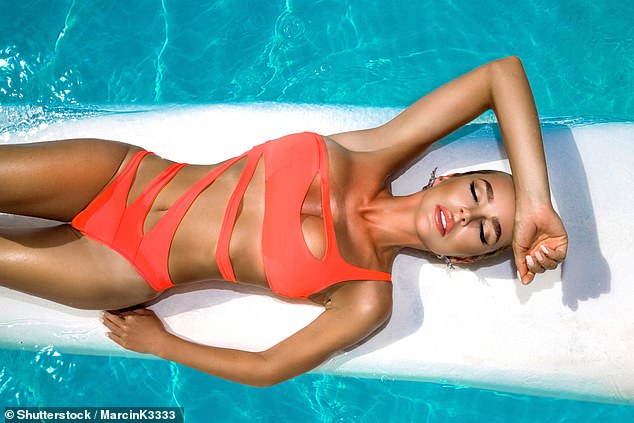 Researchers have found genes associated with addiction, behaviour and brain function which are linked to a penchant for sunbathing. They are also the same five risk-taking genes which lead people to experiment with drugs, smoking and veen multiple sexual partners (stock)

The study, published in the Journal of Investigative Dermatology, looked at the genes of more than a quarter of a million people and revealed the genetic predisposition.

As a result of the genetic role, not everyone is at equal risk of the hazards posed by excessive sun exposure.

To find out if and how sun worshipping was influenced by genes, researchers looked at detailed information on identical and non-identical twins.

As identical twins are, by definition, identical, they can be used to see if a trait is due to genes or if it is unrelated to a person’s genetic code.

More evidence has emerged which suggests COVID-19 patients with high vitamin D levels are more likely to survive the disease.

A study from the US found patients with a severe deficiency are twice as likely to experience major complications and die.

Researchers led by Northwestern University say the observational evidence is still preliminary and caution against raiding the supplement aisles.

They call for more research to understand what causes this connection between vitamin D and coronavirus mortality.

Vitamin D can make its way into the human body either through certain foods, such as fish and mushrooms, or can be produced by skin cells when exposed to sunlight. The NHS says adults should have around 10 micrograms of vitamin D every day.

When both exhibit the same behaviour, but fraternal twins do not, it often indicates a trait or behaviour has genetic roots.

The study then branched out and looked at 260,000 people and found five genetic variants which played a part in influencing sun-seeking behaviours.

Some of these genes have also been linked to behavioural traits associated with risk-taking and addiction, including smoking; cannabis and alcohol consumption; and number of sexual partners.

Researchers say that, based on their findings, genetic predisposition to sun-seeking behaviour needs to be taken into account when developing skin cancer awareness campaigns.

Senior author Dr Mario Falchi, from King’s College London, said: ‘Our results suggest that tackling excessive sun exposure or use of tanning beds might be more challenging than expected, as it is influenced by genetic factors.

‘It is important for the public to be aware of this predisposition as it could make people more mindful of their behaviour and the potential harms of excessive sun exposure.’

Dr Veronique Bataille, a consultant dermatologist from King’s College London, who is also one of the authors on the study, said: ‘It is clear that we see individuals who have very unhealthy sun behaviour and are fully aware of it.

‘They will continue to expose themselves excessively even if they have clear skin cancer risk factors.

‘Our research shows that genes regulating addiction and other risky behaviour are important and may explain some of the reticence in changing behaviours in the sun.’