‘Everyone in this country can make a difference’: Broadcaster Ben Fogle backs the Mail’s campaign to plant more trees across Britain

The adventurer and broadcaster urged everyone to switch off their mobile phones and get back to nature – as he planted a maple in a city park.

Fogle and his wife Marina attended an event organised with the Tree Council. Since the drive began, our readers have planted or pledged funds to plant more than 35,000 trees. 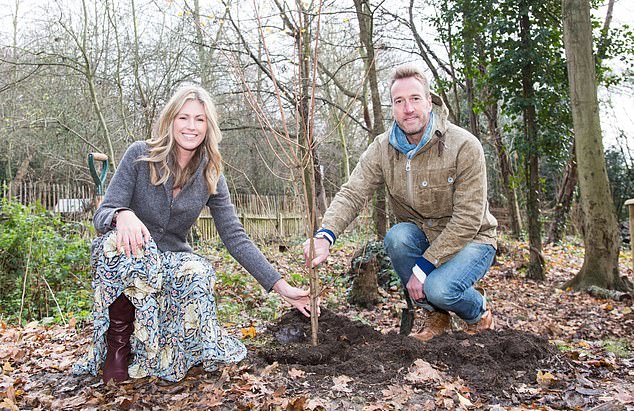 Ben Fogle was planting trees in a roadside park area called the West Woodlands, with the scheme partly funded by the London Mayor’s office and supported by Kensington and Chelsea borough. He is pictured planting the tree with wife Marina

Fogle said yesterday: ‘I’ve been an advocate for conservation and the environment for most of my life and I’d describe myself as a positive campaigner.

‘By that, I mean I try to suggest solutions rather than just warn of effects, if that makes sense. 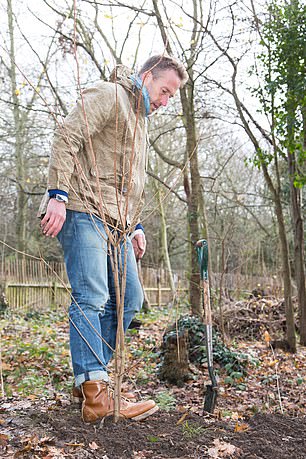 ‘So for me, something like this, supporting the Daily Mail and the Tree Council is the perfect way to achieve this. Everyone in this country, young, old, Left, Right, whatever you are, actually you can make a difference. When people hear the idea of planting millions or a billion trees it seems abstract – how could we do that?

‘But if everyone in the country planted a tiny sapling, that’s 60million trees that would grow.’

Referring to the tree he planted, a field maple in a new wooded area for children in Holland Park, west London, he said: ‘That took the best part of a minute to put that in the ground, can you imagine what would happen if every person in the country decided to plant 100 trees – you can see how this would have a profound impact on our landscape.’ 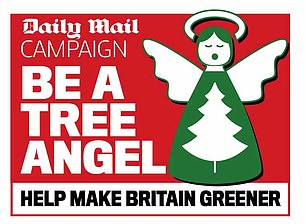 As part of the Be a Tree Angel campaign, The Daily Mail is urging readers to donate money or plant trees in their areas. And we are seeking a sponsor to plant 1,000 orchards at 1,000 schools across Britain.

Many of Britain’s schools have no trees at all – and this campaign will improve their local environment, educate them about fighting the climate crisis and promote healthier eating by teaching them how to grow fruits.

Fogle was planting trees in a roadside park area called the West Woodlands, with the scheme partly funded by the London Mayor’s office and supported by Kensington and Chelsea borough.

In all, volunteers planted 134 native trees, 130 metres of native hedge and 4,000 woodland bulbs in the area.

Fogle added: ‘Humans have had a massive negative impact on the planet, but we can also have a positive one. I think the campaign by the Daily Mail and the Tree Council is proof of how humanity has the power to change for the good.’

He said that it was a shame his children, Ludo, ten, and Iona, eight, were unable to attend, but was pleased the area would be enjoyed by youngsters.

‘The power of trees is multi-faceted, absorbing CO2, and cleaning the air, being the lungs of the planet. But it also has a psychological impact. I’m aware we are in London right now, and a lot of the Mail’s readers are in all corners of the UK, and this is where I happen to be today. But we could be anywhere in the country. Every single person walking in this park, or in a National Park is there reaping the psychological benefits. People are connected 24 hours a day to social media, and this is a way to step back and press the pause button, and get your fingers earthy.’

Sara Lom, chief executive of The Tree Council, said: ‘We’re so grateful to Ben and Marina Fogle for giving their support to the Tree Angel campaign to get everyone planting and caring for trees.’

backs, Ben, FOGLE, Mail, the
You may also like:

All-time coronavirus cases have surpassed 30 million, doubling in the past 2 months