Bendy bamboo poles really do help people carry more than their own body weight and reduce the forces exerted on their shoulders by almost a FIFTH, study claims

Bendy bamboo poles really do help people carry more than their own body weight, according to new research.

The primitive technique for carrying loads has been used throughout Asia for thousands of years – and the modern world is finally latching onto it.

It may now lead to better backpacks – and hold the key to making soldiers and emergency workers more effective, say scientists.

Ryan Schroeder, a biomedical engineer at Calgary University in Canada, said the simple method lightens heavy loads dramatically – and we can learn from the people.

The secret is it forces them to adjust their stride – turning walking into a less strenuous exercise. 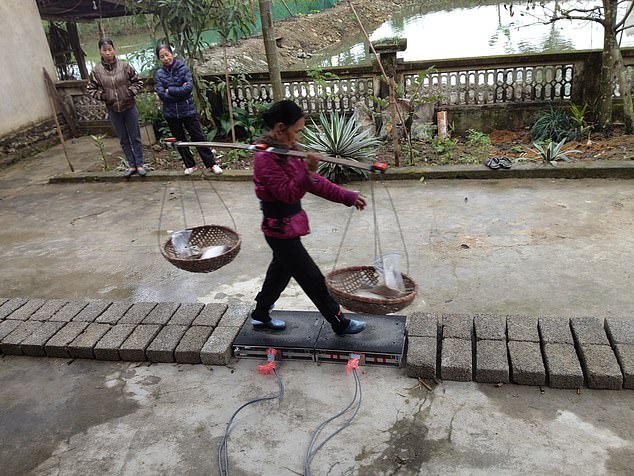 Flexible bamboo canes enable walkers transporting weighty goods or materials to save up to a fifth of their energy compared to rigid poles. Here a woman’s gait is tested as she carries the pole

Mr Schroeder, a PhD student, said: ‘These remarkable yet simple tools can potentially reduce energetic exertion and lessen sharp forces on the carrier.’

He’s already trying to implement some of the lessons in a novel backpack design.

Mr Schroeder added: ‘Westerners are only just beginning to catch on to this innovation.’

Flexible bamboo canes enable walkers transporting weighty goods or materials to save up to a fifth of their energy compared to rigid poles.

What’s more they reduced the forces exerted on the shoulders by 18 percent when burdened with half their body weight – allowed them to carry incredibly heavy loads for miles.

An analysis of villagers’ motions showed they were subtly adjusting their gait by 3.3 percent – 0.067steps a second.

Mr Schroeder, whose findings were published in the Journal of Experimental Biology, said: ‘It doesn’t sound like much – but it’s significant.’

A computer simulation showed they moved with less effort when slightly offsetting their stride from the natural bounce of their bamboo poles.

It was the bouncy bamboo pole slung across a shoulder that caught Dr James Croft’s eyes as he travelled through south east Asia – rather than the riot of colour and biodiversity.

The biologist, of Edith Cowan University in Australia, said: ‘I was curious how that evolved.

‘I wondered if the springiness of the poles allowed them to transport the load more efficiently.’ 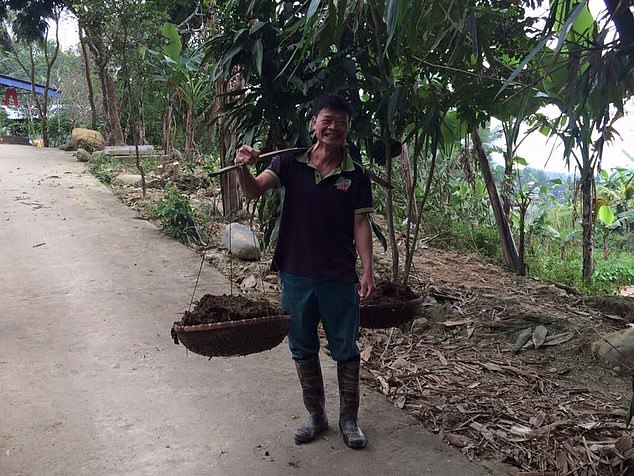 The potential benefits have been debated for years – with some studies suggesting they hinder rather than help.

But these have been carried out with pole-carrying novices whereas the villagers Dr Croft observed were true professionals – some with decades of experience.

So he decided to return to Vietnam with a team of experts to find out if experienced bamboo pole carriers adapt the way they walk.

The team has published their discovery that villagers carrying a heavy load on a flexible pole could use 20% less energy than when using a rigid pole in Journal of Experimental Biology.

Mr Schroeder described the journey as ‘both exciting and challenging.’ A translator put them in touch with 14 men and women who had experience using the canes – aged 18 to 80.

The team got them to walk along a 20 metre path carrying loads ranging from zero to 50 per cent of their body weight on their own personal pole and a rigid version.

They then measured their movements with accelerometers placed on their ankles, lower back and the poles.

Mr Schroeder said: ‘One participant – who happened to be the oldest – was slightly offended when we only asked him to carry half of his body weight of approximately 23kg (50lbs).’

When people walk, they tend to raise and lower their bodies by between 5 and 7 cm with each step.

If they are carrying a backpack the extra load must also be raised by the same amount – putting extra strain on the body.

Previous US research has shown by suspending the load you knock out 86 percent of this extra force – making it comfortable to run with a heavy load.

The principle is similar to that used by traditional Asian merchants who carry their wares using flexible bamboo poles.

A backpack based on it could make life easier for many groups of people. Children often suffer bone and muscle injuries from carrying heavy schoolbooks.

First responders in the emergency services also often have to carry heavy loads. It could also make the lives of marines and firefighters much more comfortable and less injurious.

bamboo, Bendy, help, people, poles
You may also like:

Anti-bacterial smartphone cases could stop the spread of superbugs

Crocodiles have not always been cold-blooded, say scientists

Australia's Yarrabubba impact crater is the oldest in the world