Tears of birds and reptiles have a similar chemical composition to those of humans and could help scientists develop better eye treatments, study claims

Better eye treatments could be developed as a result of a new study that found birds and reptiles have tears with a similar chemical composition to humans.

Researchers from the Federal University of Bahia, Brazil, compared the makeup of bird and reptile tears as well as their structural patterns when they dry out.

Before this scientists had only examined tears from a short list of mammals including humans, dogs, horses, camels and monkeys – but not in reptiles or birds.

Tears play a critical role in maintaining healthy eyesight across species and the team found that while tears were similar chemically, they varied in their core structure.

The team say this difference in the underlying structure could be used to uncover types of eye disease and variations between tear types to develop treatments.

Collecting tears from roadside hawk, Rupornis magnirostris. Better eye treatments could be developed as a result of a new study that found birds and reptiles have tears with a similar chemical composition to humans 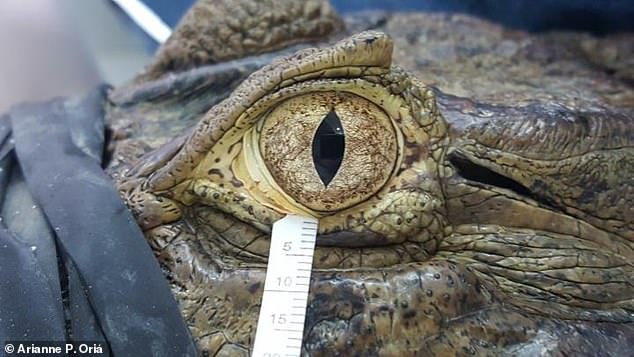 Collecting tears from Broad-snouted caiman, Caiman latirostris. Researchers from the Federal University of Bahia, Brazil, compared the electrolyte composition and structural patterns of bird and reptile tears to those in humans

Professor Arianne P Oria, first author on the study, said that finding out how tears are able to maintain a stable, relatively constant internal environment under different conditions ‘is crucial’ to understanding how they evolved in the first place.

This understanding is also ‘essential for the discovery of new molecules for ophthalmic drugs,’ according to Professor Oria.

Tears are clear liquid secreted by the lacrimal glands found in eyes of land mammals.

While they play a crucial role in maintaining healthy eyesight in not just humans, but across all other species, only a handful of mammals’ tears have been studied.

To understand more about the role tears play in other species, the researchers studied the liquid secretions of seven captive species of birds and reptiles.

These included macaws, hawks, owls, turquoise-fronted amazon (a type of parrot), as well as tortoises, caimans (a type of crocodile) and sea turtles.

They found all tear types contained similar amounts of electrolytes, such as sodium and chloride, although bird and reptile tears had slightly higher concentrations.

The researchers also looked at the crystals that formed when the tear fluid dried out and they saw different structures form from different species tears.

While all the species observed had a similar tear composition, the researchers found differences in arrangement of tear crystals between the wild species and humans.

Sea turtle and caiman tear crystals were particularly unique, probably as an adaptation to their aquatic environments, the researchers said.

In human tears, thicker crystals result mainly from changes induced by the increased presence of mucus or macromolecules, the team wrote. 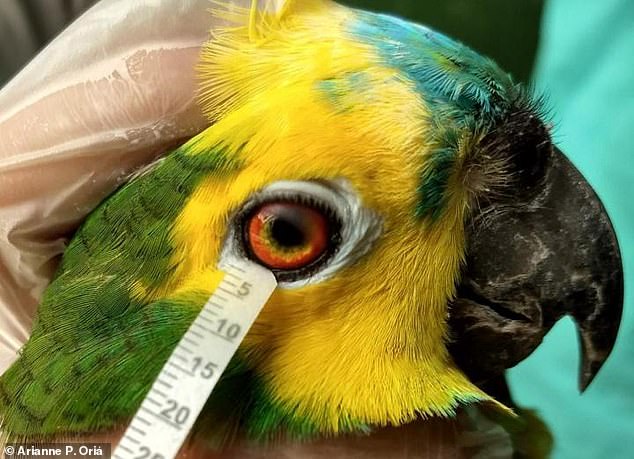 Collecting tears from Turquoise-fronted amazon, Amazona eastiva. Before this study researchers had only studied tears from a short list of mammals including humans, dogs, horses, camels and monkeys – but not in reptiles or birds

Prof Oria said: ‘Although birds and reptiles have different structures that are responsible for tear production, some components of this fluid (electrolytes) are present at similar concentrations as what is found in humans.

‘But the crystal structures are organised in different ways so that they guarantee the eyes’ health and an equilibrium with the various environments.’

The researchers said that further studies with a wider range of species are needed to understand more about the role of tears.

Prof Oria said: ‘This knowledge helps in the understanding of the evolution and adaption of these species, as well as in their conservation.’

The research has been published in the journal Frontiers in Veterinary Science.

a, And, Bird, have, reptile, tears
You may also like: