Birds in cities are having more chicks because light pollution

Birds living in urban areas have more chicks than those in the country because of light pollution prompting them to lay eggs earlier in the year, study finds.

Researchers from California Polytechnic State University based examined data collected by the public on 58,506 nests from 142 species across North America.

They found that urban birds are laying eggs around three or four weeks earlier than peers in the country living away from the 24/7 light of a town and city environment.

What is more, forest species in well illuminated, rather than darker, areas produce clutches around 16 per cent larger than those in naturally dark environments.

Co lead author Professor Clint Francis said birds that have advanced the timing of their reproduction due to light pollution are having better reproductive success. 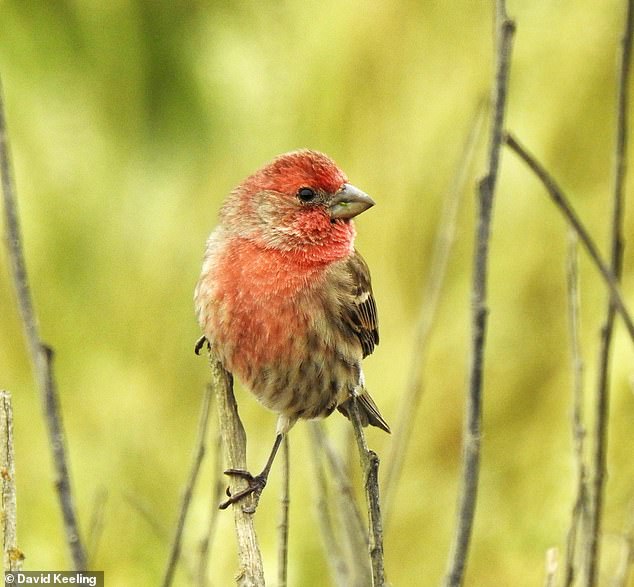 ‘An interpretation of this is that light pollution allows these birds to ‘catch up’ to the shift towards earlier availability of food due to climate change,’ said Francis.

While light does seem to be helping some birds adapt to climate change, forest birds are particularly vulnerable to noise pollution found in more urban areas.

They are suffering a decline in clutch size – a phenomenon not observed in those on grasslands and wetlands, the team explained.

The findings show that the affects of light and noise pollution on our feathered friends is more complicated than previously believed. 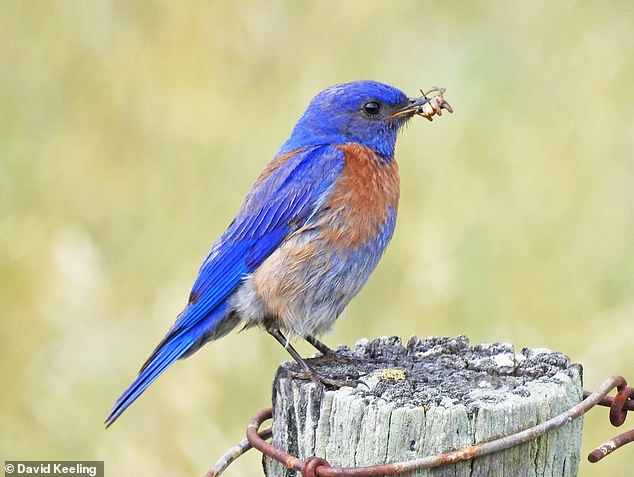 Western bluebirds laid more eggs in their nests, failed at the egg stage at lower rates and had greater overall nest success with increases in exposure to light pollution 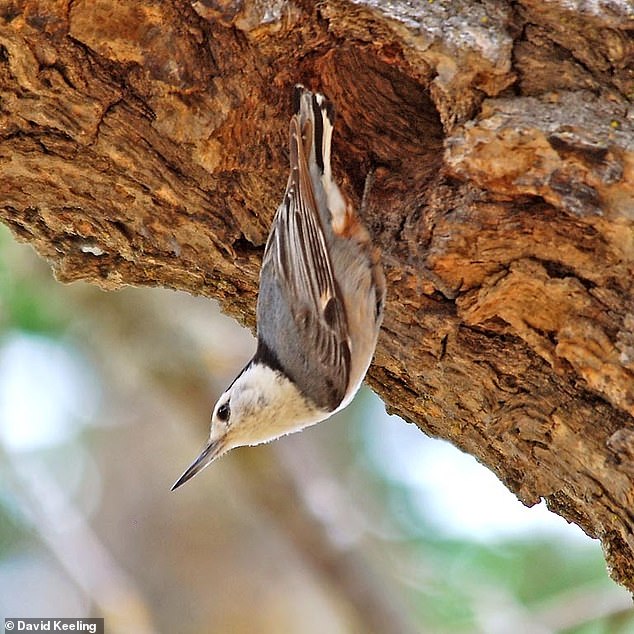 House sparrows and purple martins laid more eggs with increases in light pollution, but noise had the opposite effect on the same species of birds.

For the study researchers compared nesting times of bird species in North America with light and noise levels.

Study authors say in some cases the earlier nesting has helped the birds with food sources appearing earlier due to a warming climate.

House finches strongly advance the start of nesting with increased light exposure, but it was also likely to lead to not all eggs hatching.

Both noise and light pollution reduced the success rates of violet-green swallows.

The northern cardinal suffers delayed breeding in response to noise pollution, likely due to the fact the species has a relatively low frequency song .

Francis, a biologist at California Polytechnic State University, said: ‘Our study provides the most comprehensive evidence that noise and light can profoundly alter reproduction of birds, even when accounting for other aspects of human activities.’

Recent troubling findings suggest bird populations around the world have declined by more than 30 per cent in the last few decades.

To develop effective strategies to reverse this trend, scientists and land managers need to understand what caused the reduction in population.

The effects of noise and light had been largely overlooked until some studies suggested these stressors are harming the creatures.

Now the first continent-wide picture has emerged using data on 142 species collected by citizen scientists between 2000 and 2014.

Francis said light and noise produced by humans can impact bird breeding and fitness of forest birds that shower greater sensitivity to light and sound.

‘It underscores the need to consider these pollutants when implementing biodiversity conservation,’ explained Francis.

His team analysed the date of first egg-laying, clutch size, partial hatching success, clutch failure and nest success, which they combined with geospatial data on anthropogenic noise and light pollution.

‘Noise and light pollution affect breeding habits and fitness in birds, implying sensory pollutants must be considered alongside other environmental factors in assessing biodiversity conservation,’ he said.

The study, published in the journal Nature, also sheds light on how light sources can fuel or mask the impacts of climate change on bird populations and breeding.

It considered several issues, including the time of year breeding occurred and whether at least one chick fledged from each nest.

Birds time their reproduction to coincide with peak food availability to feed their young, using daylight cues to breed about the same time each year.

The researchers found light pollution causes birds to begin nesting up to a month earlier than normal in grasslands or wetlands and 18 days earlier in forests.

The consequence could be a mismatch in timing – with hungry chicks hatching before their food is readily available. 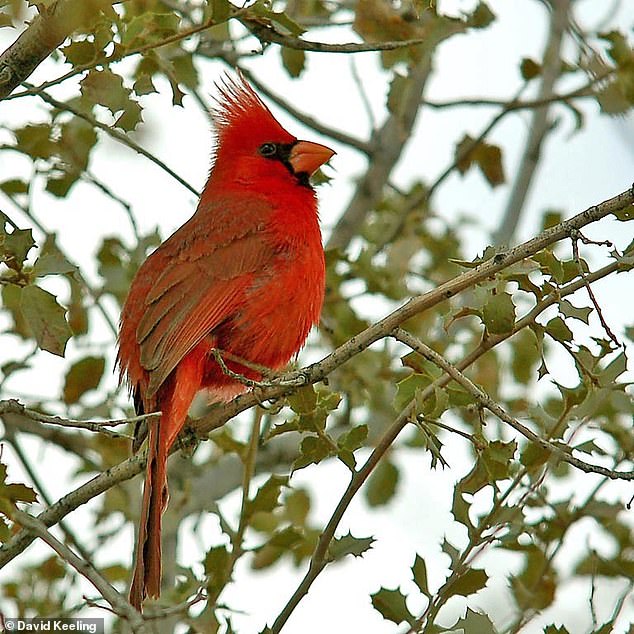 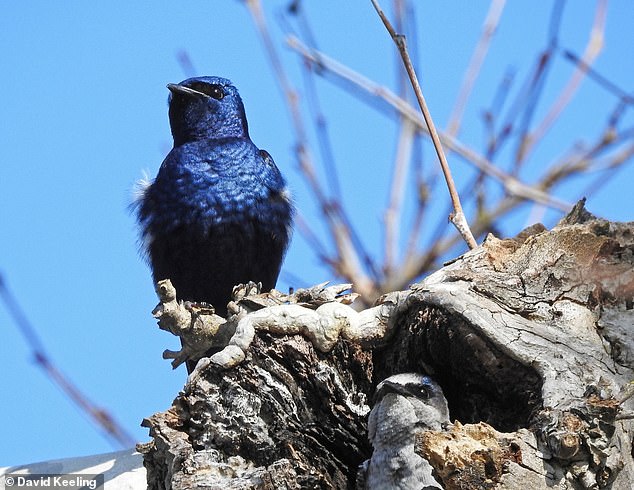 Purple martin nests failed at the egg stage at greater rates with increases in noise pollution, but light pollution had the opposite effect. Ultimately, elevated noise exposure was associated with a strong decline in overall nest success

These early season nests may be less successful at fledging at least one chick. As the planet warms, birds’ food is available earlier due to warmer weather.

Birds that maintain their historical breeding times rather than adapt to climate change, because their internal clocks are set to changes in day length, may have fewer chicks survive because the food source they rely on already came and went.

Those in areas impacted by light pollution may track climate change better than those in natural habitats that are darker.

Scientists thought birds were adjusting their reproductive timing to global warming but this study suggests it may have been changes in light cues – as it has happened more in areas where birds are exposed to some light pollution. 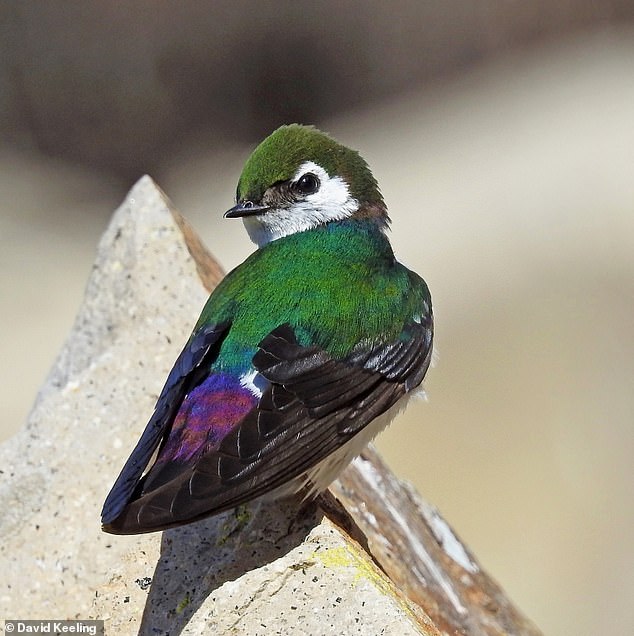 Violet-green swallow nests failed at the egg stage at greater rates with increases in noise and light pollution. Ultimately, elevated light exposure was associated with a strong decline in overall nest success

When considering noise pollution, results showed birds living in forests tend to be more sensitive than those in open environments.

An analysis of 27 specific species showed a bird’s ability to see in low light and the pitch of its call were related to their responses to light and noise, respectively.

The more light a bird’s eye is capable of taking in, the more it moved its breeding time earlier in the year in response to light pollution and improved nest success.

Noise pollution delayed nesting for birds’ whose songs are at a lower frequency and thus more difficult to hear through low-frequency human noise. 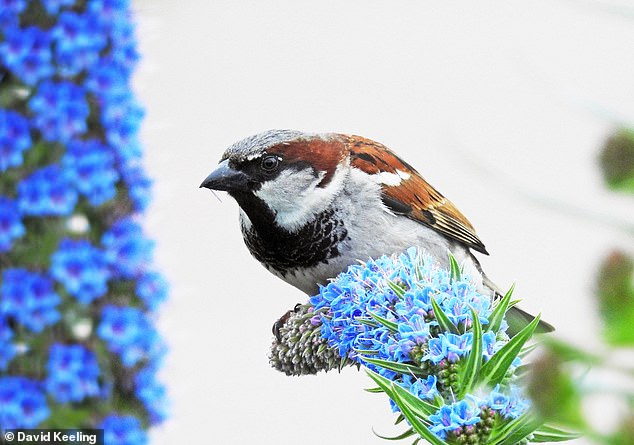 House sparrow nests failed at the egg stage at greater rates with increases in noise pollution, but light pollution had the opposite effect

These trait and environment-specific results have strong implications for managing wildlands, according to Francis and colleagues.

‘We show convincingly across a lot of species that noise and light pollution are having strong effects on wild populations,’ he said.

‘If there’s a proposed development and land managers are worried about a bird that they have no information on, they can use this study to see whether the development is likely to affect the bird.

‘Is it a forest bird? If so, it is likely that it is more sensitive to light and noise.’

The study is the first step toward a larger goal of developing a sensitivity index for all North American birds.

It would allow managers and conservationists to cross-reference multiple physical traits for a species to assess how factors such as light and noise pollution would affect it and each species.

LIGHT POLLUTION IS ARTIFICIAL LIGHT THAT IS EXCESSIVE, OBTRUSIVE AND WASTEFUL

Light pollution, also known as photopollution, is the presence of anthropogenic light in the night environment.

With more than nine million streetlamps and 27 million offices, factories, warehouses and homes in the UK, the quantity of light we cast into the sky is vast.

While some light escapes into space, the rest is scattered by molecules in the atmosphere making it difficult to see the stars against the night sky. What you see instead is ‘Skyglow’.

The increasing number of people living on earth and the corresponding increase in inappropriate and unshielded outdoor lighting has resulted in light pollution—a brightening night sky that has obliterated the stars for much of the world’s population.

Most people must travel far from home, away from the glow of artificial lighting, to experience the awe-inspiring expanse of the Milky Way as our ancestors once knew it.

Light pollution is excessive and inappropriate artificial light. While some light escapes into space, the rest is scattered by molecules in the atmosphere making it difficult to see the stars against the night sky. What you see instead is ‘Skyglow’

The negative effects of the loss of this inspirational natural resource might seem intangible.

But a growing body of evidence links the brightening night sky directly to measurable negative impacts on human health and immune function, on adverse behavioural changes in insect and animal populations, and on a decrease of both ambient quality and safety in our nighttime environment.

Astronomers were among the first to record the negative impacts of wasted lighting on scientific research, but for all of us, the adverse economic and environmental impacts of wasted energy are apparent in everything from the monthly electric bill to global warming.