The first ever all-British radar satellite has been launched into orbit, where it will be used to monitor the world’s oceans for any criminal activity.

NovaSar, designed and manufactured by Surrey Satellite Technology Ltd (SSTL), based in Guildford, Surrey, was launched into space aboard a rocket from the Satish Dhawan Space Centre in India at 17:38pm BST (12:38 ET) yesterday.

The radar satellite will take photographs of the oceans around the clock and is even capable of penetrating dense cloud cover to capture images.

This ability makes it ideal for spotting illegal logging in high cloud-covered forests, such as the Amazon.

It will also be used to monitor oil spills and floods, as well as tracking suspicious shipping activity around the world.

UK Science Minister Sam Gyimah said the data from this project will help innovate start-ups, develop apps and ‘revolutionise the way we live’. 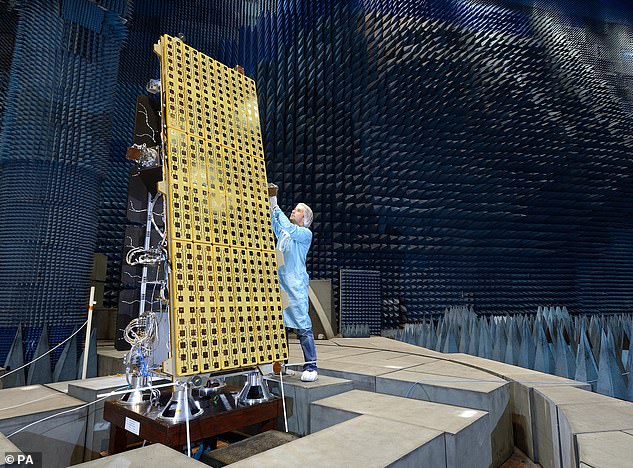 HOW DOES NOVASAR SEE THROUGH CLOUDS?

The satellite uses acutely sensitive radar to detect any objects in its observable range.

Radar, which stands for Radio detection and ranging, works by sending out a wave which is then detected when it bounces back.

The time between the initial burst and when the wave returns is used to create an image that reveals how far away an object is and how big it is.

This is much the same way that sight works, light is bounced off an object and into the eye, where it is detected and processed.

Radar can be used to see through different materials, in darkness, fog and a variety of different weather conditions.

NovaSar will operate at around 3.2 gigahertz.

NovaSar was backed by a £21 million ($27.5 million) government investment and can take images during the day and night.

Dr Graham Turnock, the UK Space Agency’s chief executive, said: ‘This exciting new satellite, with its powerful imaging radar system and compact design, has been developed and built in the UK, and will provide a host of benefits for applications including the detection of oil spills, flood monitoring and agriculture.’

The satellite will find any suspicious or criminal activity by using a sensor that can pick up Automatic Identification System (AIS) radio signals.

These are the specific transmissions that large ships have to produce under international law.

Any vessels found tampering with or disabling these broadcasts are likely to be involved in nefarious activities.

If any of these incognito vessels are spotted by NovaSar then they will be reported to the relevant authorities.

‘We are very interested in this maritime mode, which is a 400km-plus swath mode,’ said Luis Gomes, the chief technology officer at SSTL. 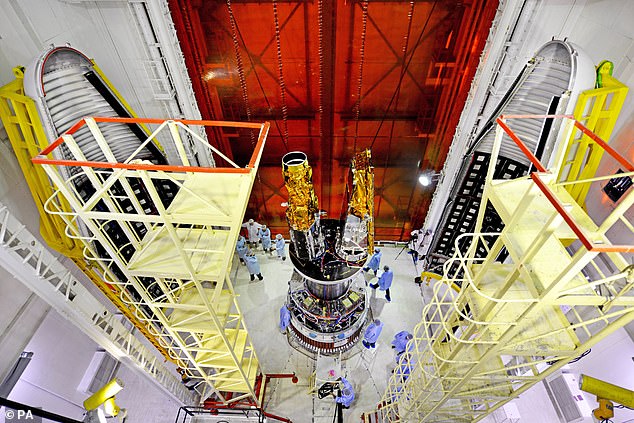 ‘It is important to be able to monitor large areas of the ocean – something we don’t do at the moment. We all saw with the Malaysian airline crash in the Indian Ocean the difficulty there was in monitoring that vast area. We can do that kind of thing with radar and NovaSar is good for that,’ he told BBC News.

The satellite was designed by Surrey Satellite Technology Ltd (SSTL) in Guildford, which was also launching a second satellite.

NovaSar’s sister satellite is known as S1-4 and is a high-resolution optical satellite.

It is fitted with immensely powerful visual equipment which will allow it to take pictures in high resolution in ordinary light.

The cameras on-board the orbiting device will be capable of discerning objects on Earth’s surface as small as 34 inches (87 cm) across.

NovaSar was designed by Surrey Satellite Technology Ltd (SSTL) in Guildford, which was also launching a second satellite. The firm took to twitter to confirm the successful launch of the satellite