Boston Dynamics’ robotic ‘dog’ Spot is now being sold to businesses for the first time – but it will cost them nearly $75,000 a piece

After years of development, Boston Dynamics’ four-legged robot ‘dog’ will be sold to companies for the first time ever.

‘Spot’, as the bot is called, will retail for $74,500 and comes with some restrictions as to when and where it can be deployed.

Specifically, Boston Dynamics says all of its sales will be subject to terms and conditions that dictate the ‘beneficial use’ of its robots.

The company sees ‘Spot’ applying most directly to ‘commercial and industrial use’ and in particular, to bolster safety in jobs where humans could be harmed.

‘The combination of Spot’s sophisticated software and high performance mechanical design enables the robot to augment difficult or dangerous human work,’ aid Marc Raibert, chairman and founder of Boston Dynamics in a statement.

‘Now you can use Spot to increase human safety in environments and tasks where traditional automation hasn’t been successful.’

As exemplified by recent uses in Singapore where Spot was being used to monitor pedestrians’ adherence to social distancing, the bot can be equipped with various sensors to augment or change its capabilities.

The ability to actually purchase Spot marks the next phase since Boston Dynamics began leasing the bot last year.

In that pilot, Boston Dynamics says that 150 Spot robots were used by domestic and businesses and research facilities to ‘document construction progress, monitor remote or hazardous environments, and provide situational awareness.’ 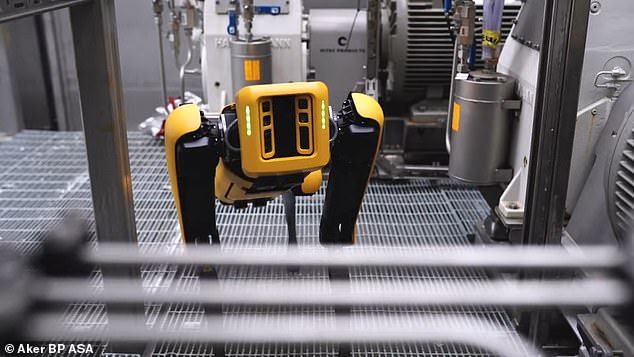 As noted by The Verge, Boston Dynamics has taken a stance against some use cases.

Boston Dynamics’ vice president of business development, Michael Perry told The Verge that the company will not support uses of Spot that ‘harm or intimidate” people which includes banning the attachment of weapons.

As with any piece of technology, however, there is no guarantee that the Spot won’t be used for purposes outside of Boston Dynamics’ intentions once purchased.

Spot has already raised some onlookers’ concerns for being deployed by police.

Last year documents obtained by the American Civil Liberties Union, confirmed Spot has been involved in multiple police ‘incidents’ though the full details of those cases is not yet clear.