Brains of people addicted to their smartphone physically change shape

How smartphone addiction changes your BRAIN: Scans reveal how grey matter of tech addicts physically changes shape and size in a similar way to drug users

Smartphone addiction physically changes the shape and size of the human brain in a similar way to the organ of a drug addict, a study has found.

Images taken by an MRI scanner revealed the brains of people with SPA (smartphone addiction) have lower grey matter volume in some key parts of the brain.

The images also revealed decreased activity in the brains of smartphone addicts compared to non-addicts.

Similar patterns and trends of dwindling grey matter have also been recorded in the mind of drug addicts. 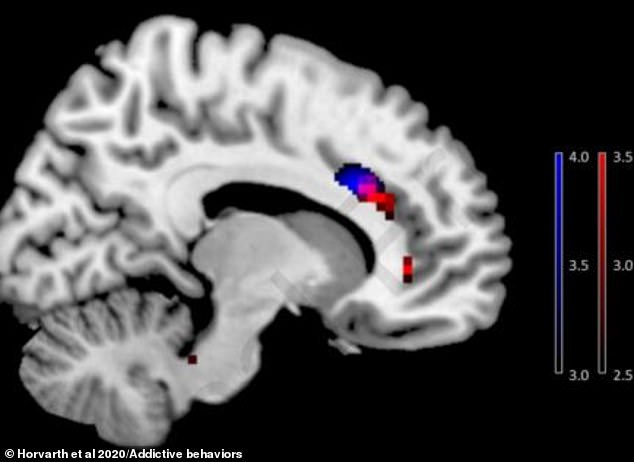 WHAT IS SMARTPHONE ADDICTION?

The term ‘smartphone addiction’ has often e been criticised in the scientific literature.

Some experts argue the lack of severe negative consequences compared to other forms of addiction make the name misleading.

Some say the issue isn’t with the smartphone, but it is merely a medium to access social media and the internet.

Alternative terms such as ‘problematic smartphone use’ and concepts have been proposed instead.

Despite the controversy on the term ‘smartphone addiction’, as described above, it is still the prevailing term in the scientific world.

Additionally, the psychometric instruments used in many studies explicitly refer to the concept of ‘smartphone addiction’.

In the upcoming years, a shift away from the term ‘smartphone addiction’ towards more appropriate terms, as discussed above, might be seen.

Decreased grey matter in one of these regions, the insula, has previously been linked to substance addiction.

They add that this is the first physical evidence of a link between smartphone use and physical alterations to the brain.

The authors, from Heidelberg University, write: ‘Given their widespread use and increasing popularity, the present study questions the harmlessness of smartphones, at least in individuals that may be at increased risk for developing smartphone-related addictive behaviors.’

Smartphone addiction is a growing concern among scientists and medical professionals as children especially spend more and more time on the handsets.

A damning report recently found most children (53 per cent) own a mobile phone by the age of seven years old.

Phone ownership is now ‘almost universal’ once children are in secondary school, it revealed.

It also found 57 per cent of children sleep with their phone by their bed and almost two in five (39 per cent) youngsters say they could not live without their phone.

Researchers said the findings show the extent to which phones can ‘dominate children’s lives’.

The ubiquity of phone use in society is a cause for concern as the physiological and health implications remain poorly understood, experts of the latest research warn.