Farmers have proposed a radical plan to return an area the size of Dorset to nature and reintroduce beavers, lynxes and pelicans to the British countryside.

WildEast aims to dedicate some 250,000 hectares of East Anglia — Britain’s most intensely farmed region — to wildlife over the next five decades.

The charity — which advocates for regenerative farming to restore soil health — aims to convince farmers, councils and others to pledge a fifth of their land to nature.

The group is also looking to create an accreditation system to encourage wildlife-friendly farmers and work with schools to educate children about nature. 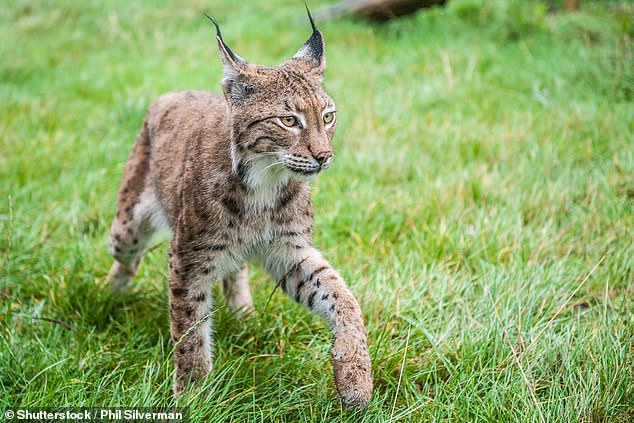 Farmers have proposed a radical plan to return an area the size of Dorset to nature and reintroduce beavers, lynxes (pictured) and pelicans to the British countryside (file photo)

WildEast’s three founders are farmers Olly Birkbeck, Argus Hardy and Hugh Somerleyton — who together own more than 3,200 hectares of farm land across Norfolk and Suffolk.

‘We want to wake up the regional collective consciousness,’ Lord Somerleyton — who is working to set up a 400-hectare enclosure of wood, grassland and heath on his estate, complete with free-roaming pigs and ponies —  told the Guardian.

Lord Somerleyton explained that European Union subsidies previously paid farmers to devote 4 per cent of their land to wildlife — and the UK Government’s post-Brexit plans may see similar support provided but for 10 per cent of land to be rewilded.

However, he continued, ‘if you’re prepared to rewild 20 per cent of your backyard, that humbles the farmer because you’re not getting a grant for it.’

‘We in the east want to do it together and not wait for the government.’

‘Farmers are beginning to realise that they have a moral duty to protect the countryside that they are dependent on,’ Mr Birkbeck — who has recreated 200 hectares of heath on his land — told the Guardian.

‘We have to work with nature rather than shut it out, because it will find you out in the end. We’ve tidied nature up and swept it away in the last 40 years.

‘If we can only get back to accepting mess again we’d be getting somewhere. We’ve started WildEast to make that conversation public.’

Mr Birkbeck added that many farmers have been cautious towards the idea — but the younger generation are increasingly aware of the need to turn away from farming practices that rely on harsh chemicals to more nature-friendly alternatives.

It is the WildEast founders’ hope that local councils will also be willing to get involved in their project. One concept they envisage, for example, would see land earmarked for industrial estates given approval if 20 per cent was set aside for nature.

Existing supporters of the charity include the Chet B-line — a project which set up a 10-mile corridor of bee-friendly habitats along the River Chet in South Norfolk.

Another pollinator-promoting supporter is Dingley Dell Pork, a family-owned farming business in Suffolk which has been sowing wildflower strips beside their outdoor pig pens — and creating environments from more than a million bees in the process.

‘Get 1,000 people to do that and it’s a billion-bee project,’ Mr Hardy told the Guardian.

The sheep farmer also said that he would be willing to farm alongside what may seem like the most unusual and, in his case, antithetical of their ideas — reintroduced lynx, which vanished from Britain around 1,300 years ago.

‘We have to accept what’s here and what was here. Far more sheep are killed by parasites than lynx, where they are present in natural ecosystems. Worms are a much greater threat,’ he said.

WildEast is in the process of developing an app on which people will be able to upload their pledges of land to wildlife on a so-called ‘map of dreams’ — covering everything from restoring ponds to creating nature-friendly gardens.

Alongside this, the charity has launched the hashtag #mywildeast to encourage conversation around the issue on social media, has produced a TikTok video and also developing an education programme that interested schools can take part in.

‘We’re trying to reach out on various platforms, however clumsily,’ Mr Hardy told the Guardian.

British, farmers, propose, ret, to
You may also like: