The UK will send its first moon rover to the lunar surface in 2021.

A private company will send the world’s smallest robotic moon rover, which will have legs instead of wheels and weigh just 3lbs (1.5kg), as part of a NASA-funded mission.

If it pulls it off, the campaign could make the UK just the fourth nation to successfully put a rover on the moon – both India and Israel have tried and failed this year.

UK start-up space company, SpaceBit, created and designed the robot and announced the mission at the New Scientist Live event in London today.

SpaceBit founder Pavlo Tanasyuk, said: ‘Our goal is to go there and see what is available there for all humanity to explore.’

In a past interview he has revealed the company plans to collect and sell data from the moon – it already has a satellite orbiting there. 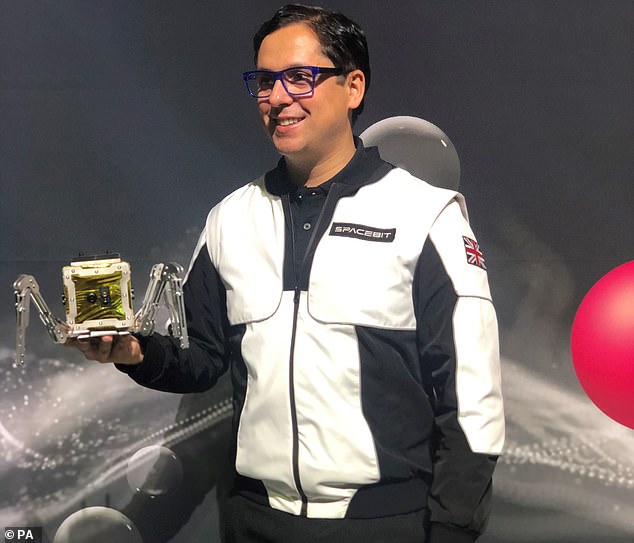 Pavlo Tanasyuk, the CEO and founder of the company SpaceBit, which will send the tiny rover (pictured) said he wanted to ‘see what is available for humanity to explore’

Mr Tanasyuk added that this robot, with its four legs, would provide an opportunity for ‘something a little bit like a human’ to explore the lunar surface.

He graduated with a MPhil of Cambridge University in 2010 and with an MSc in Management and Information Systems from the London School of Economics in 2008.

And he also ran the payment system company MoneXy before selling it to invest in space projects.

His company, SpaceBit, has joined forces with Astrobotic, a Pittsburgh-based lunar exploration firm given almost $80million (£65m) to send private firms to the moon in 2021. 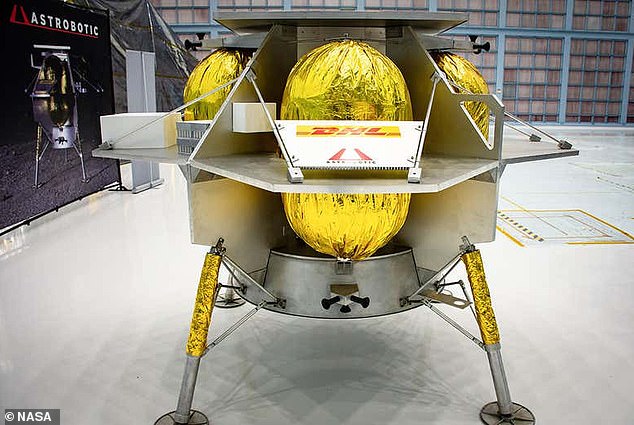 The SpaceBit rover will fly to the moon on Astrobotic’s Peregrine lander, which has been awarded NASA funding to carry some of the US space agency’s implements to the lunar surface

The SpaceBit rover will be flown into space on Astrobotic’s own Peregrine lander mission.

The reason for the legs is that in future lunar missions, the rover will go into lava tubes, which has not been possible before.

Mr Tanasyuk said: ‘It will spend up to 10 days on the moon before going into the night and basically freezing forever.’

He added: ‘This mission will result in the first payload from the UK to reach the Moon surface and mark the beginning of a new era in commercial space exploration for Britain.’ 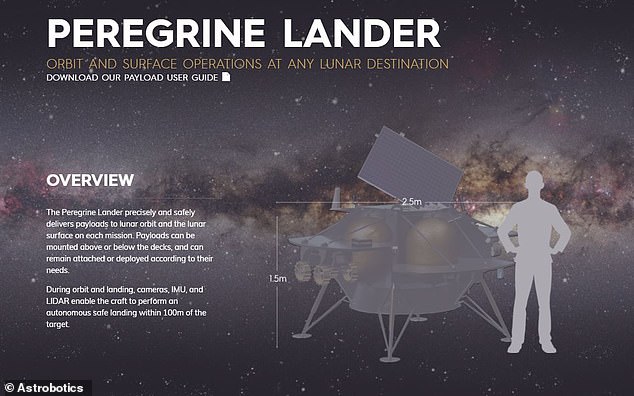 Only three other countries have put a rover on the moon, the US, Russia and China – and next it could be the UK.

In May, Nasa announced that Astrobotic and two other companies had been awarded funding to build lunar landers.

Astrobotic’s Peregrine mission – its lander is about eight feet (2.5m) wide and six feet (1.9m) tall – will take up to 14 NASA instruments to the moon as well as private payloads.

SpaceBit will be one of those partners, sending the rover to the surface inside Astrobotic’s Peregrine lander, which is expected to land in June or July 2021.

Once the lander reaches the moon, the 3lbs (1.5kg) rover will drop from beneath it to the surface along with other payloads. 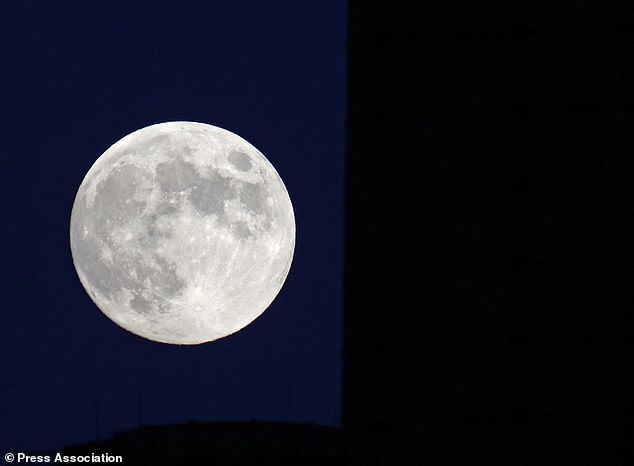 The moon over Greenwich in south east London. Only three countries have so far successfully landed on the lunar surface with rovers or people – the US, China and Russia

It will scuttle across the surface taking measurements and collecting exploration data that can be analysed for scientific and exploration purposes.

It also has two cameras that will enable it to take ‘robot selfies’, SpaceBit said.

In an interview published on Medium in 2018, Mr Tanasyuk said he wanted to ‘democratise’ the space industry by allowing people to privately fund missions using cryptocurrency.

He outlined plans for SpaceBit to use instruments – a satellite or rover, for example – to collect data from the lunar surface then sell it online.

This would be made available to people using cryptocurrencies such as Bitcoin, he suggested.

WHO HAS BEEN TO THE MOON?

In total twelve people have walked on the moon.

Neil Armstrong made history by becoming the first person to set foot on the moon.

Edwin ‘Buzz’ Aldrin followed Neil Armstrong on to the surface of the moon.  His popular nickname gave itself to the animated characte Buzz Lightyear.

Pete Conrad and Alan Bean were the moon walkers on the Apollo 12 mission.

Alan Shepard and Edgar Mitchell who were part of the Apollo 14 mission. They launched on January 31, 1971, and landed in the Fra Mauro region of the moon, the original destination for Apollo 13.

David Scott and James Irwin landed on the moon and stayed for three days, until August 2nd.

John Young and Charles Duke were the next men to walk on the moon. When the crew reached lunar orbit, the mission almost had to be aborted because of a problem with Command/Service Module’s main engine.

The final people to walk on the moon were Eugene (Gene) Cernan and Harrison (Jack) Schmitt.

Before he left the moon, Cernan scratched the initials of his daughter Tracy into the lunar regolith. Since the moon does not experience weather conditions like wind or rain to erode anything away, her initials should stay there for a very long time.

All the men who have been to the moon