Burial site of more than 200 Anglo-Saxons discovered in Suffolk

Eerie ‘sand-silhouettes’ of more than 200 skeletons are uncovered at an Anglo-Saxon cemetery in Suffolk dating back more than 1,500 years

An Anglo-Saxon burial ground has been painstakingly uncovered in Suffolk.

A total of 17 cremations and 191 burials were found at the 1,400-year-old site, which is said to be of ‘national importance’.

But due to the acidity of the soil and the poor preservation methods used upon entombment, no bones remain, just shadow-like ‘sand silhouettes’ of the skeletons and coffins that were buried there.

This form of preservation is extremely delicate but allowed archaeologists to find out the site was a burial ground for several generations of a farming community.

Located just 40 miles from the Sutton Hoo, a royal burial ground with an ancient ship first found in 1939, the land was being cleared for a new housing development. 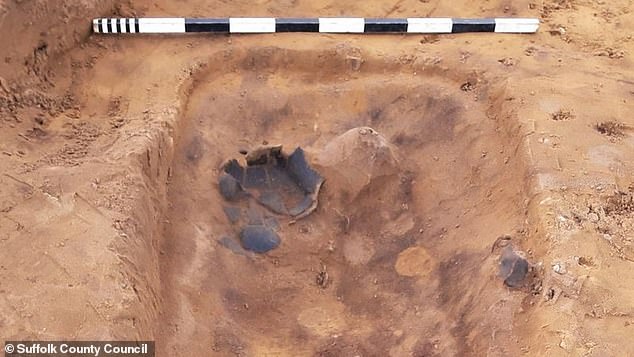 An Anglo-Saxon burial ground has been painstakingly uncovered in Suffolk. Due to the acidity of the soil and the poor preservation methods used upon entombment, no bones remain, just a shadow-like ‘sand silhouette’ (pictured) 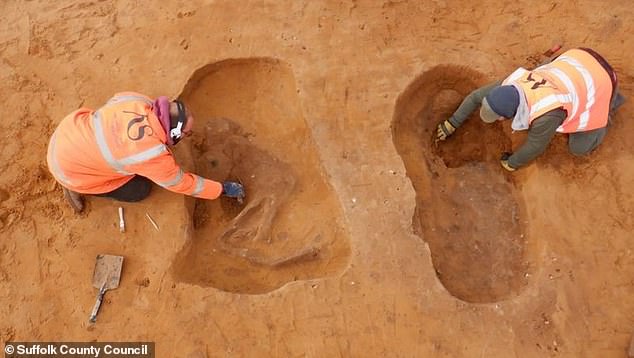 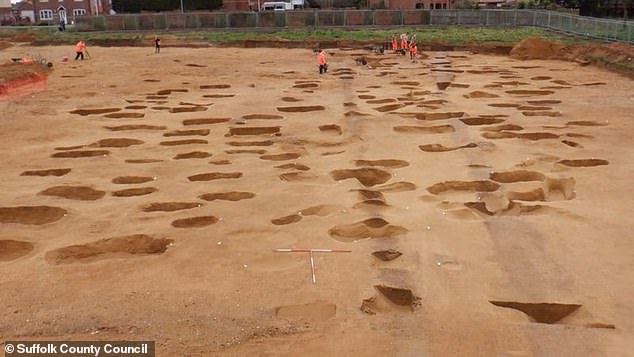 A total of 17 cremations and 191 burials were found at the 1,400-year-old site which is said to be of ‘national importance’

Andrew Peachey, of Archaeological Solutions Ltd who led the excavations, said: ‘These shadows also revealed traces of the wooden coffins.

‘Unusually, many of the graves also included fragments of pottery and decorated pots.

‘Many of the artefacts were so fragile they had to be removed still in the earth for analysis and conservation and we also recovered pieces of textiles and leather.’

The site contained remains of men, women and children, as well as a smattering of burial goods.

Ongoing studies will endeavour to learn more about the people who were laid to rest in the plot of land in Oulston, near Lowestoft.

A Suffolk county council spokesman said: ‘This is a nationally significant discovery and continues to show what a historic place Suffolk is.

‘The site lies within the 7th Century Kingdom of the East Angles, made famous by the royal burial ground at nearby Sutton Hoo.’

Many of the finds were extremely fragile when first discovered and archaeologists were reluctant to dig deeper in the field.

Some artefacts had to be block lifted, a process where a large area of land is dug out and lifted whole before being transported, and undergo micro-excavation at Norfolk Museum Service.

The site has now been fully excavated, paving the way for further studies to unpick the details of the 200 Anglo-Saxons who were buried here.

WHAT DO WE KNOW ABOUT SUTTON HOO?

Located near Woodbridge, Suffolk, Sutton Hoo is home to two burial mounds from the 6th and 7th centuries — the latter a ship burial.

The undisturbed burial site is believed to have been the resting place of King Rædwald of East Anglia.

The vessel is oft dubbed a a ‘ghost ship’ thanks to how only its iron rivets and impressions of timber remained.

Within the ship, however, archaeologists in 1939 found a ceremonial helmet, a shield, a sword, pieces of silver plate from the Byzantine Empire and metalwork fittings made of gold and gems.

The Sutton Hoo artefacts are now housed in the collections of the British Museum, London, while the mound site is in the care of the National Trust.