Researchers have identified the earliest known human burial in Africa at Panga ya Saidi, a cave near the Kenyan coast. A child, probably a boy of about 2-1/2 to 3 years old, was placed in a pit about 78,000 years ago, laid carefully on his side, curled up, likely with some kind of pillow under his head.

Modern humans and Neanderthals buried their dead in Europe and the Middle East at multiple sites that have been dated as 120,000 years old. But little evidence of burial behaviors has been uncovered in Africa, the acknowledged origin of modern humans. One possible burial in South Africa dates to about 74,000 years ago and another in Egypt to 68,000 years ago.

The burial of this person the researchers named Mtoto, meaning “child” in Swahili, clearly shows intentional care that characterizes what scientists call funerary behavior, as opposed to merely placing remains at a distance from a camp.

Maria Martinon-Torres, director of the National Research Center on Human Evolution in Burgos, Spain, and one of the primary authors of the report on the burial published Wednesday in the journal Nature, said that the way that the skeleton had collapsed indicated that something was placed under the head of the child.

The torso appeared to have been wrapped in material that later disintegrated, “something like big leaves, like plants or perhaps animal skin,” she said. 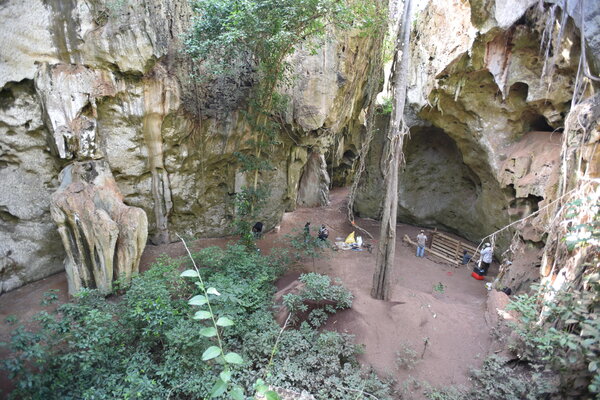 She said the covering, in addition to the digging of a pit and the apparent use of some sort of pillow for the head, suggested the “involvement of the community in putting the child in this very specific position.”

The scarcity of known burial sites in Africa is puzzling, she said, and could be explained by the use of other practices for tending to the dead, or by a lack of sufficient scientific field work, or because the cultural ritual of burial practice evolved in modern humans elsewhere and came later to Africa.

The remains of the child, while clearly Homo sapiens, also showed some dental characteristics that were different from other human remains, perhaps supporting the idea that modern humans evolved in more than one part of Africa, as small bands of people traveled and mixed with others, rather than in one particular place.

Dr. Martinon-Torres thinks the Kenyan site may well yield more burials and more hints about how one of the most distinctive behaviors of humans originated and changed over time.

“Humans are the only species that treat the dead with the same consideration, respect and delicacy, and if we even say tenderness, that we dedicate to the living,” she said.