Chinese e-commerce giant JD.com has constructed a fulfillment center that handles as many as 200,000 orders each day – and it only has four employees.

That’s because the roughly 100,000 square foot facility is run almost entirely autonomously, with human employees solely on site to tend to the robots.

According to JD.com, the warehouse leverages ‘highly-automated sorting technology’ to sort up to 16,000 packages per hour with 99.99% accuracy. 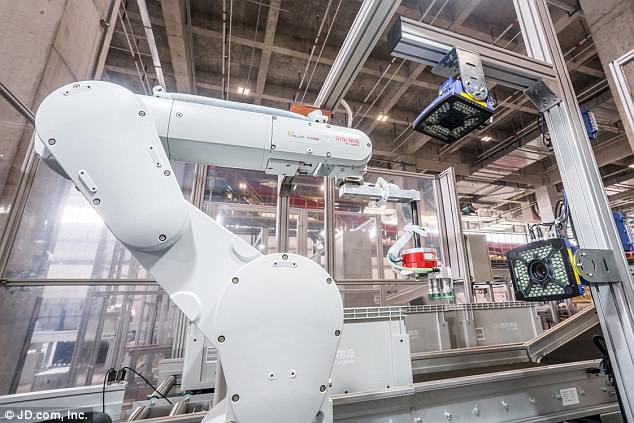 Chinese e-commerce giant JD.com has constructed a fulfillment center that handles as many as 200,000 orders each day – and it only has four employees

HOW DOES JD.COM’S AUTONOMOUS FACTORY WORK?

Located outside Shanghai, the 100,000 square foot sorting center uses artificial intelligence to scan and inspect packages as they’re being processed.

Packages are taken off of trucks, carried through a ‘complex network’ of conveyor belts and machinery.

Image scanners check the packages and then they’re delivered to specific bins.

Driverless forklifts ferry the packages to a truck so that they can be sent out for delivery.

Located outside Shanghai, the sorting center uses artificial intelligence to scan and inspect packages as they’re being processed.

‘Once packages are taken off trucks at one side of the Kunshan facility, they’re loaded onto a complex network of automated machinery, where fast-moving, automated conveyors zip each box around,’ JD.com explained.

Then, image scanners check the packages in ‘microseconds’ and the firm’s smart logistics system calculates where they should be dropped off.

The packages are grouped by region, picked up by autonomous forklifts and brought to a truck for delivery.

JD.com says the robotic package handlers can accomplish tasks in a fraction of the time that it would take 180 warehouse workers to accomplish. 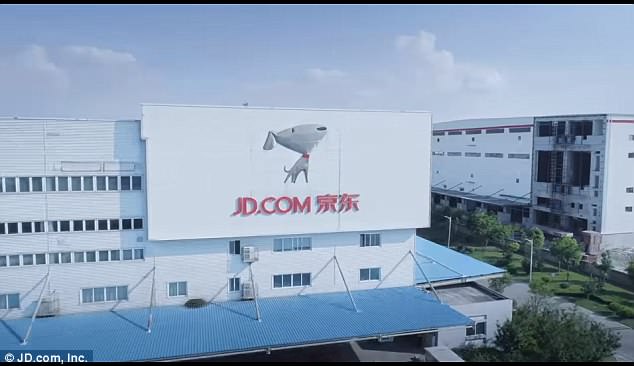 Located outside Shanghai, the 100,000 square foot sorting center uses artificial intelligence to scan and inspect packages as they’re being processed 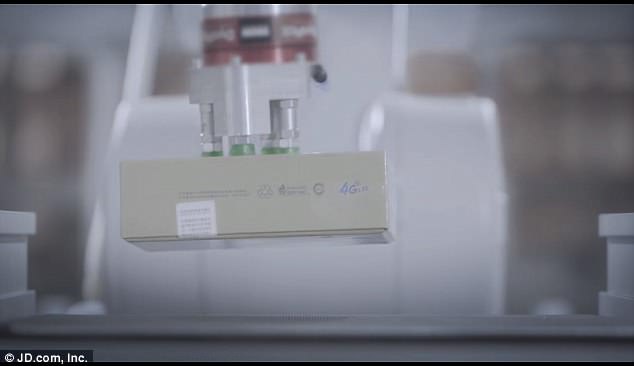 According to JD.com, the almost human-less warehouse leverages ‘highly-automated sorting technology’ to sort up to 16,000 packages per hour with 99.99% accuracy

The firm employs 17,540 people at its other warehouses, but acknowledges that the rapidly growing e-commerce sector calls for speedier solutions to ensuring packages make it to shoppers doors.

It faces steep competition from fellow Chinese e-commerce firm Alibaba, as well as Amazon, Walmart and others.

‘At the rate that e-commerce is growing in China and around the world, robotics and automation will be a necessary solution to meet that explosion in demand,’ said JD Logistics CEO Zhenhui Wang.

‘We are investing in this advanced technology, and other automation throughout our supply chain, with an eye on the long-term.’ 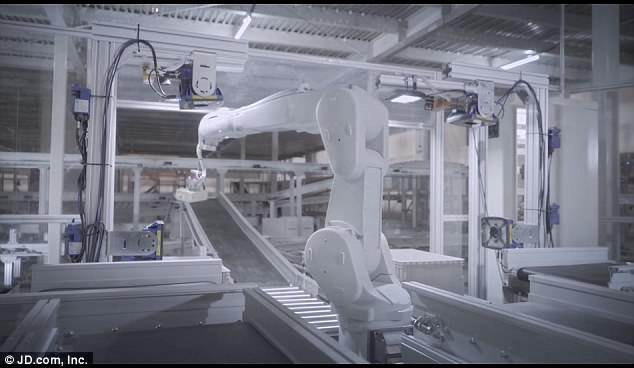 The firm faces steep competition from fellow e-commerce companies like China’s Alibaba, Amazon and Walmart. Many of them also use automated tech in their factories

The idea of automated fulfillment centers may scare off many, but as MIT Technology Review noted, many of these facilities were already automated for a while.

Amazon uses robotic machines to organize shelves of goods and for routing and tracking packages.

But JD.com has been doubling down by applying automation to several different areas of its logistics process.

The firm constructed a network of autonomous drones that can handle long distance deliveries.

Drones are primarily based out of the northern Chinese province of Shaanxi and travel through a network that spans a 200 mile radius, with drone bases throughout the province.