Spot a spider monkey from your armchair: Citizen scientists urged to help tackle deforestation and habitat loss by scouring drone footage for sightings of the critically endangered species

Citizen scientists are being asked to help spot spider monkeys by scouring drone footage for sightings of the critically endangered species.

The aim of the project, launched as part of British Science Week is to help scientists tackle deforestation and habitat loss in the tropical forests of Central America.

Volunteers will look at images taken of the forests and tag anything that looks like it might be a spider monkey to help train a computer algorithm.

The tags will train the machine-learning algorithm to track spider monkeys on its own, saving researchers hundreds of hours of time. 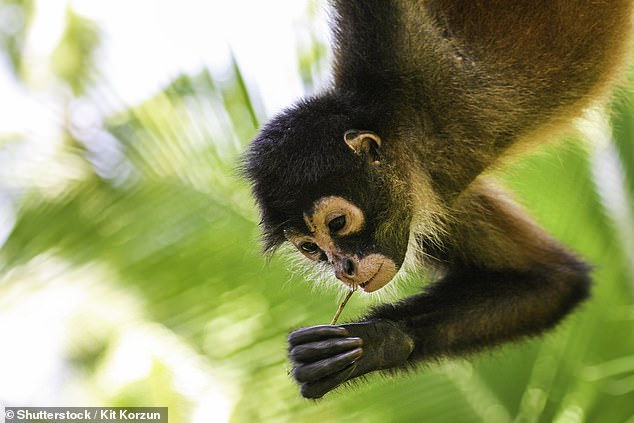 Dr Claire Burke of the Astrophysics Research Institute at Liverpool John Moores University is leading the project that sits on the Zooniverse website.

The goal is to tag 17,000 infrared videos of spider monkeys, which will help scientists understand more about the effects of deforestation.

‘With the black spider monkey population estimated to have fallen by 30% in the last 45 years, primarily due to habitat loss, this is vital work,’ said Dr Burke.

‘If we could halt this decline, and perhaps even reverse it in some places, this would mean we were not only protecting the future of the spider monkeys, but also of these vital forest habitats.

‘We really want to see the public’s passion drive them to tag these spider monkeys during British Science Week – saving our team years of research time.’ 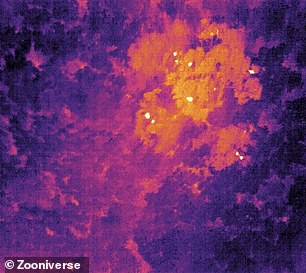 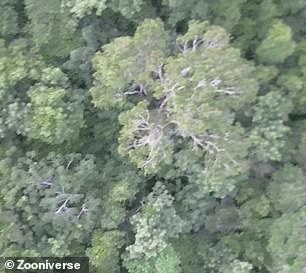 In a previous citizen science project more than 1.5 million pieces of plastics were spotted and tagged by the public, saving researchers thousands of hours of time.

Katherine Mathieson, Chief Executive at the British Science Association said the whole nation can get involved in science week.

‘They can know they’re making a difference to a global issue that can otherwise seem tricky to tackle,’ she said.

‘We’re excited to see an army of sofa scientists jump at the opportunity to save and protect spider monkeys on the other side of the world.’

Mike Barrett, Executive Director of Science and Conservation, at WWF said it is clear our planet is under threat like never before and we need to do more to protect it.

‘We are the first generation to know we are destroying the world, and the last that can do anything about it.’

WHAT IS A SPIDER MONKEY?

Spider monkeys are found in tropical forests in central and south America.

They range from southern Mexico to Brazil and have ‘disproportionately long limbs’ and a prehensile tail.

It is their long appendages that give them their common ‘spider’ name.

They are a food source for local human populations and are threatened by habitat destruction due to logging and land clearance.

The population is in decline and some species of spider monkey are critically endangered.

The project will raise awareness of the impact deforestation and poor sustainability has on the planet, according to the BSA.

Researchers said of the spider monkey project: ‘With a thermal camera animals glow like stars and galaxies, so we can use astronomical techniques to find them.

‘To tell different species apart we need to teach the computer what they look like.’

The charity also hopes that by taking part people will increase their awareness of the choices we can all make to live a more sustainable life.

They conducted a survey ahead of the week of events and found that some sustainable change is already happening – particularly around single use plastic.

Two thirds of Brits said they spurned plastic straws and 63 per cent refuse to use plastic coffee cups when out for a hot drink.

Over half are making a conscious decision to buy fewer items and re-using where possible, and 40 per cent are using less paper, the study found. 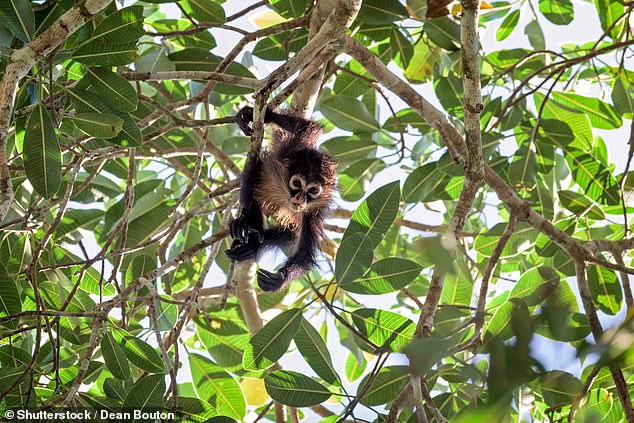 With the black spider monkey population estimated to have fallen by 30% in the last 45 years, primarily due to habitat loss, this is vital work the researchers said

This isn’t showing when it comes to the impact of palm oil, according to the BSA, who say 69 per cent reported not checking household products to see if it was from a sustainable source.

WWF says that palm oil is in close to 50 per cent of the packaged products we find in supermarkets, from food to cosmetics.

When grown unsustainably, palm oil production is a major driver of deforestation and habitat loss – including for species like the spider monkey.

Of those surveyed 80 per cent of Brits don’t think deforestation should be considered a priority for the climate crisis, when compared to other environmental issues such as overpopulation.

The BSA says this is despite the fact it is the cause of around 10 per cent of global warming.

‘Many are still unaware of the scale of this challenge or what to do. But there is still time to change,’ said Barrett.

MAP REVEALS THE DEVASTATING RATE OF DEFORESTATION AROUND THE GLOBE

The destruction caused by deforestation, wildfires and storms on our planet have been revealed in unprecedented detail.

For comparison, that’s a loss of forested land equal in size to the entire state of Alaska.

The maps, created by a team involving Nasa, Google and the University of Maryland researchers, used images from the Landsat satellite.

Each pixel in a Landsat image showing an area about the size of a baseball diamond, providing enough data to zoom in on a local region.

Before this, country-to-country comparisons of forestry data were not possible at this level of accuracy.

‘When you put together datasets that employ different methods and definitions, it’s hard to synthesise,’ said Matthew Hansen at the University of Maryland.

citizen, he, scientists, to, urged
You may also like:

Bermuda Triangle is area which ‘cannot be explained by physical science’