‘Night-shining’ clouds forming 50 miles above Earth’s surface are becoming more common due to climate change, a study has found.

The clouds give off a shocking blue haze when ice crystals fixed to tiny particles of ‘meteor dust’ high in the atmosphere reflect sunlight.

Noctilucent clouds are the highest in Earth’s atmosphere, and are only seen during summer nights. 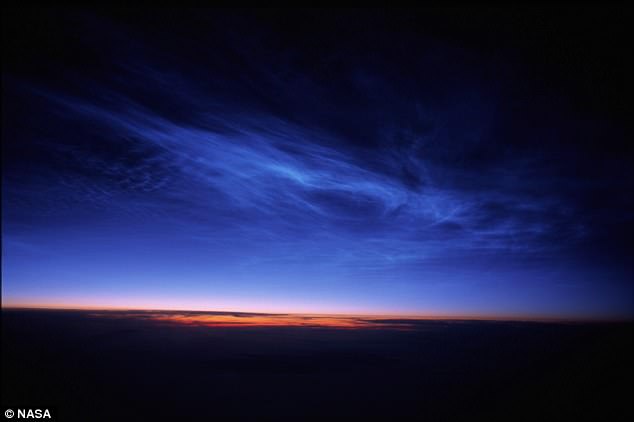 ‘Night-shining’ noctilucent clouds forming 50 miles above Earth’s surface are becoming more common due to climate change, a study has found

The stunning night-shining clouds form in the middle of the atmosphere, in a layer known as the mesosphere.

Researchers have noted an increase in noctilucent clouds due to human-induced climate change causing increased water vapor in the atmosphere.

‘We speculate that the clouds have always been there, but the chance to see one was very, very poor, in historical times,’ said Franz-Josef Lübken, an atmospheric scientist at the Leibniz Institute of Atmospheric Physics in Kühlungsborn, Germany and lead author of the new study in Geophysical Research Letters.

Humans first spotted the clouds in 1885, after the eruption of Krakatoa volcano in Indonesia spewed massive amounts of water vapor in the air.

Sightings became more common in the 20th century, and by the 1990s researchers began wondering if climate change was making them more visible.

Researchers used satellite observations and climate models to simulate how the effects of increased greenhouse gases have contributed to noctilucent cloud formation over the past 150 years.

Extracting and burning fossil fuels delivers carbon dioxide, methane and water vapor into the atmosphere, all of which are greenhouse gases. 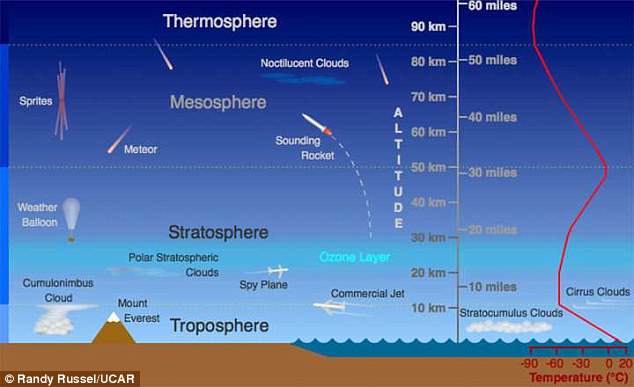 This diagram shows the major layers of Earth’s atmosphere. Noctilucent clouds form in the mesosphere, high above where normal weather clouds form

The results found that methane emissions have increased water vapor concentrations in the mesosphere by about 40 percent since the late 1880s. This has more than doubled the amount of ice that forms in the mesosphere.

The researchers believe that human activities are the main reason why noctilucent clouds are significantly more visible now than they were 150 years ago.

‘Our methane emissions are impacting the atmosphere beyond just temperature change and chemical composition,’ said Ilissa Seroka, an atmospheric scientist at the Environmental Defense Fund in Washington, D.C. who was not connected to the new study.

‘We now detect a distinct response in clouds.’

WHAT ARE NOCTILUCENT (NIGHT-SHINING) CLOUDS?

Here, water vapor freezes into clouds of ice crystals, which are illuminated when the sun is below the horizon.

They are seeded by debris from disintegrating meteors, giving them a ‘shocking’ blue hue when they reflect sunlight.

The clouds are formed during the summer of both the northern and southern hemispheres.

Carbon dioxide warms Earth’s surface and the lower part of the atmosphere, but actually cools the middle atmosphere where noctilucent clouds form.

According to NASA, they are observed seasonally, during summer in both the Northern and Southern hemispheres, when the mesosphere is at its most humid, sending water vapor up from lower altitudes.

At this time, it is also the coldest place on Earth, hitting temperatures as low as -210 degrees Fahrenheit as a result of air flow patterns.

Studying these clouds provides insight on the behavior of this layer of the atmosphere, and its role relative to other layers, weather, and climate, the researchers say.

The start of the season has been recorded anywhere from Nov 17 to Dec 16.