Climate may have triggered collapse of the Rapa Nui society

Collapse of the indigenous Rapa Nui population on Easter Island may have been triggered by changes in the Earth’s climate BEFORE the arrival or European settlers in 1722, study shows

The collapse of the Rapa Nui society on Easter Island in the South Pacific Ocean may have been triggered by changes in the Earth’s climate 500 years ago.

The Rapa Nui people inhabited the remote island, about 2,300 miles from the coast of Chile, from the middle of the first millennium AD.

The arrival of European explorers in 1722 led to a rapid decline of the population, brought on by murder, bloody conflict and the brutal slave trade.

However, Chilean scientists say there is evidence that the collapse of the indigenous population was already underway prior to the arrival of Dutch and Spanish settlers.

Climate change including droughts and resulting falls in the island’s carrying capacity and food supply led to a population decline, they say. 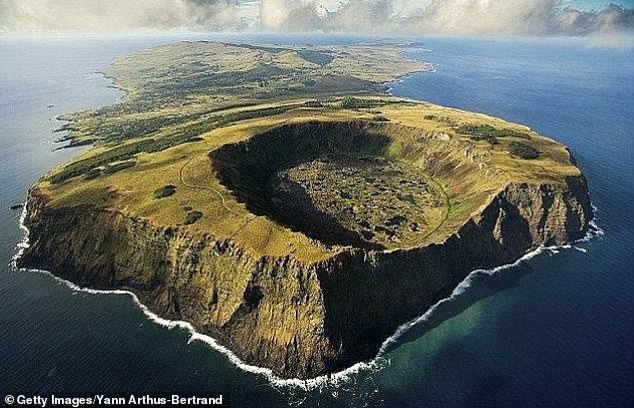 Fluctuating climate contributed to the decline of the Rapa Nui society on Easter Island (pictured) in the South Pacific Ocean, scientists say

‘We think that the key driver in understanding the demographic and landscape changes in Rapa Nui was the long-term forcing effect of climate on the island’s per-capita resource base,’ the research team say in Proceedings of the Royal Society B: Biological Sciences.

‘Human population size and energy consumption at the Rapa Nui society would be limited by food production, which depends on two processes, crop productivity and land availability.

‘Droughts on the island could explain the extensive deforestation, as agriculture production increased the demand for farming lands, linked to soil erosion and exhaustion.’ 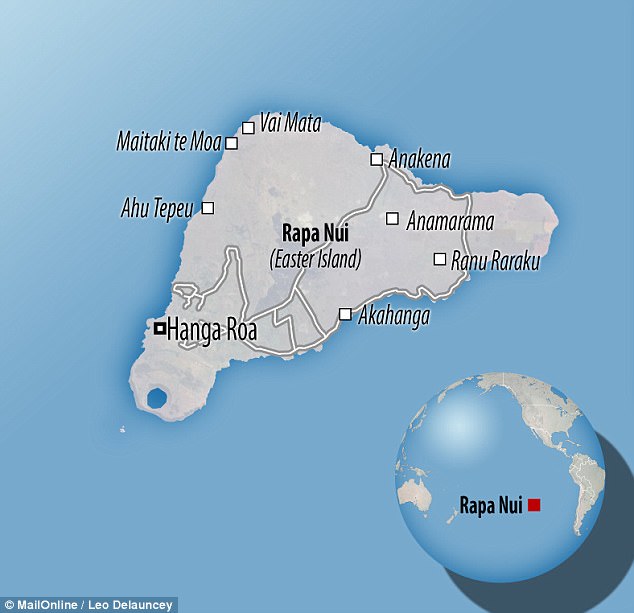 Samples from 1,400 AD, toward the end of the island’s occupation, were taken from various archaeological sites on the island (pictured). They were examined to gain a better understanding of how the diet of the islanders may have changed over time

Construction on some parts of the island’s monuments begins.

1600: The date that was long-thought to mark the decline of Easter Island culture.

1770: Spanish seafarers landed on the island. The island is in good working order.

1722: Dutch seafarers land on the island for the first time.

Monuments were in use for rituals and showed no evidence of societal decay.

His crew described an island in crisis, with overturned monuments.

The research team have drawn comparisons with the potential threats currently faced by humanity – overpopulation and ongoing climate change – with the Rapa Nui society.

They say looking at the fate of past societies may provide important insights regarding food security and ecological resilience for human populations today.

These societies and any observations of the problems they faced can act as natural, historical ‘laboratories’ for understanding the relationship between human population, food production and climate change.

One of the most studied and widely used as a comparison with today is the population collapse of Rapa Nui.

This collapse had been generally attributed to the arrival of the first Europeans in the 18th century, in a theory labelled the ‘genocide hypothesis’.

This hypothesis goes that the population on Rapa Nui grew exponentially since approximately 1150 CE, reached the carrying capacity, but maintained a stable population size and sustainable crops despite deforestation.

The collapse in the population occurred after the European colonisation, triggered by the arrival of Dutch explorer Jacob Roggeveen in 1722, and the resulting bloodshed, the theory goes. 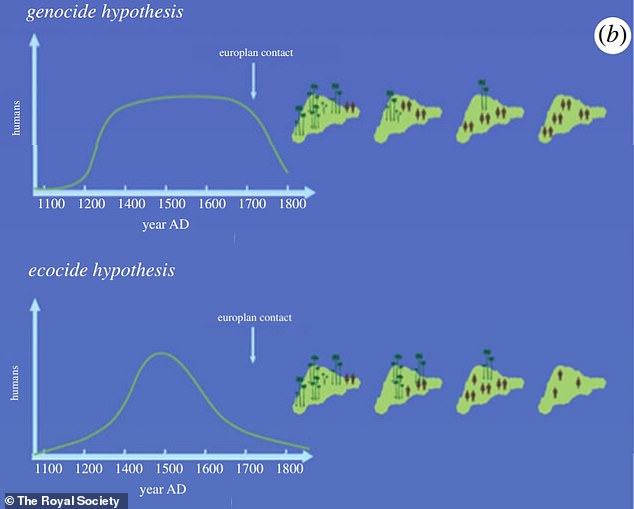 The genocide hypothesis (top) and the ecocide hypothesis (bottom). The latter supports a decline in human population before the arrival of Europeans, which was due in part to climate changes, researchers say

Human population increased exponentially since the aboriginal Polynesian inhabitants initially arrived there – a date that’s been given variously between AD 700 and AD 1200.

These populations overshot the carrying capacity to support sustainable crops, and in consequence, the island was severely deforested, which led to a socio-demographic collapse.

The research team argue in favour of the ecocide hypothesis to some extent, but add that the decline was caused by climate factors. 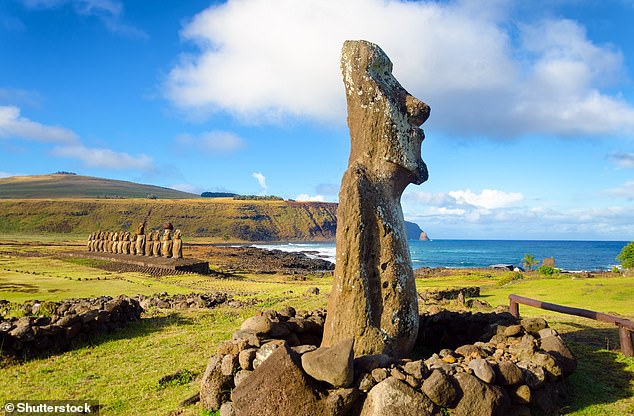 The Moai are monolithic human figures carved by the Rapa Nui people on Easter Island, between AD 1,250 and 1,500

The scientists tested different hypotheses with mathematical models of climatic, demographic and ecological factors that underpinned the trajectory of the Rapa Nui people.

The models were then evaluated against a reconstruction of past population size based on archaeological radiocarbon dates from the island.

Rapa Nui experienced a long-term climatic trend towards drier conditions since the initial colonisation of the island, the team say.

This, and a gradual decrease in rainfall and island productivity, explains the process of expansion and demographic collapse experienced by the native people. 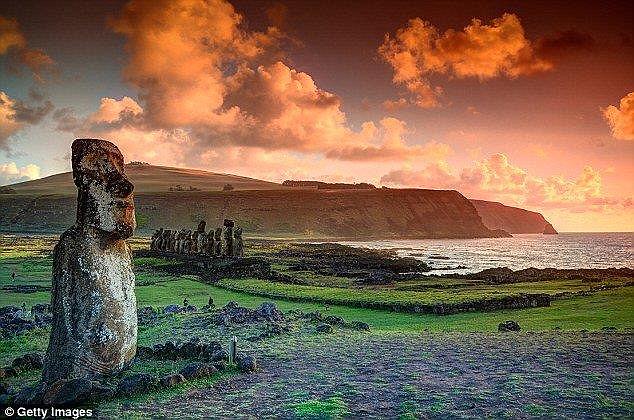 Even small perturbations in climate can trigger disproportionately large demographic responses and the study can act as a warning for modern societies.

‘Our results imply that climate effects should not be evaluated independently of population size when attempting to explain demographic changes,’ the team write.

‘Understanding the relationship between human population dynamics and climate change is one of the major challenges for addressing the present environmental crisis and the possibility of a sustainable future.’

Previous isotope analysis of animal and plant remains taken around the 15th Century on the island, toward the end of the island’s occupation, show around a 50 per cent dietary intake from marine sources.

This was much higher than previous estimates and suggests the Rapa Nui society had to rely on non-agricultural sources of food.

WHAT ARE THE STATUES ON EASTER ISLAND AND WHAT DO THEY MEAN?

What are the statues?

The Moai are monolithic human figures carved by the Rapa Nui people on Easter Island, between 1,250 and 1,500 AD.

All the figures have overly-large heads and are thought to be living faces of deified ancestors.

The 887 statues gaze inland across the island with an average height of 13ft (four metres).

Nobody really knows how the colossal stone statues that guard Easter Island were moved into position.

Nor why during the decades following the island’s discovery by Dutch explorers in 1722, each statue was systematically toppled, or how the population of Rapa Nui islanders was decimated.

Shrouded in mystery, this tiny triangular landmass, stranded in the middle of the South Pacific and 1,289 miles from its nearest neighbour, has been the subject of endless books, articles and scientific theories.

All but 53 of the Moai were carved from tuff , compressed volcanic ash, and around 100 wear red pukao of scoria.

What do they mean?

In 1979 archaeologists said the statues were designed to hold coral eyes.

The figures are believed to be symbol of authority and power.

They may have embodied former chiefs and were repositories of spirits or ‘mana’.

They are positioned so that ancient ancestors watch over the villages, while seven look out to sea to help travellers find land.

But it is a mystery as to how the vast carved stones were transported into position.

In their remote location off the coast of Chile, the ancient inhabitants of Easter Island were believed to have been wiped out by bloody warfare, as they fought over the island’s dwindling resources.

All they left behind were the iconic giant stone heads and an island littered with sharp triangles of volcanic glass, which some archaeologists have long believed were used as weapons.

climate, Col, have, May, triggered
You may also like: