Follow
Home » Science » Comet Neowise is easily visible in the night sky this week. See the most dazzling photos and videos of it so far.

A 3-mile-wide ball of space ice is rocketing past Earth this month.

The rare visitor only appears every 6,800 years. It makes its presence known by emitting long tails of blue and yellow gas and dust.

The comet, called Neowise, reaches its peak brightness this week, but its prominence has already given photographers across the globe some unique opportunities to snap impressive shots. From the plains of Wyoming to the forests of Japan (and even from the windows of the International Space Station), the comet and its brightly colored tails have been hard to miss.

Here are the most stunning photos and videos of Comet Neowise so far.

The huge comet is gracing night skies all over the world with its brilliant flare as it makes its way past Earth this month. 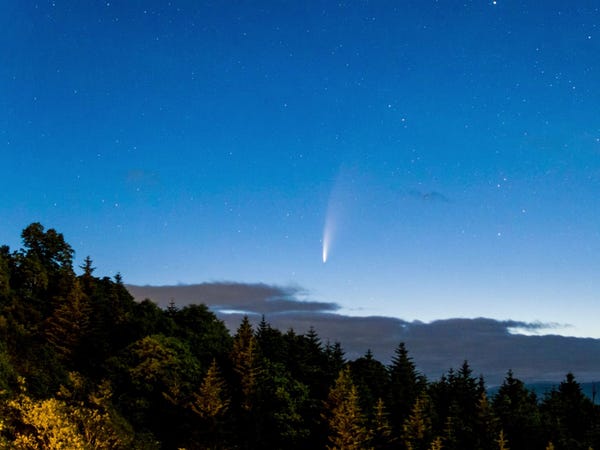 Stargazers and photographers are finding open-sky vantage points to capture the rare sight.

On July 3, Comet Neowise swung by the sun, getting about 10 million miles closer to it than Mercury's orbit.

Amateur astronomer Thierry Legault photographed the comet at sunset, above the tidal island of Mont-Saint-Michel in France.

The sun's heat warmed the 3-mile (5 kilometer) ice ball enough to cause it to spray out two tails that stretch millions of miles into space.

The white tail is made of dust and the blue one is made of ionized gas, according to NASA.

As Neowise has approached Earth, stargazers can easily pick it out against the night sky.

Photographer Declan Deval snapped the photo below as the comet rose above Stonehenge.

Astronauts even spotted Comet Neowise from the International Space Station, 250 miles above Earth. 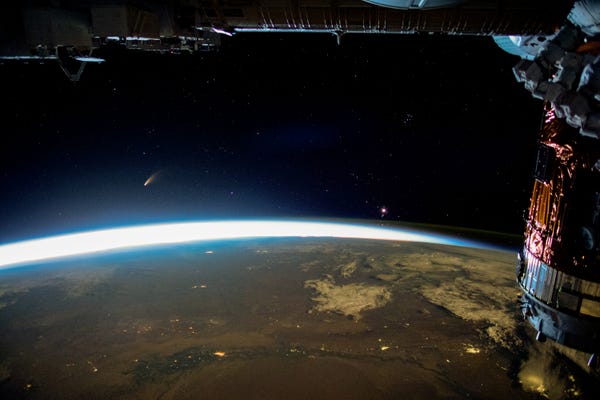 "Right before the sun came up, that comet became visible during that short period of time when it was still close to the sun, but the sun was still hidden by the Earth," NASA astronaut Bob Behnken, who recently launched to the ISS aboard SpaceX's new Crew Dragon spaceship, told The New York Times' "The Daily" podcast last week. "It was just an awesome sight to be able to see."

Before the comet faded into the blinding glare of the sun, Behnken and his colleagues recorded hundreds of photographs.

UK-based graphic artist Seán Doran downloaded those images from a NASA archive and edited them into a breathtaking time-lapse movie. (The comet becomes visible around 3:10.)

On Earth, photographer Jesse Smith stayed up all night to capture the comet over Mt. Shasta. 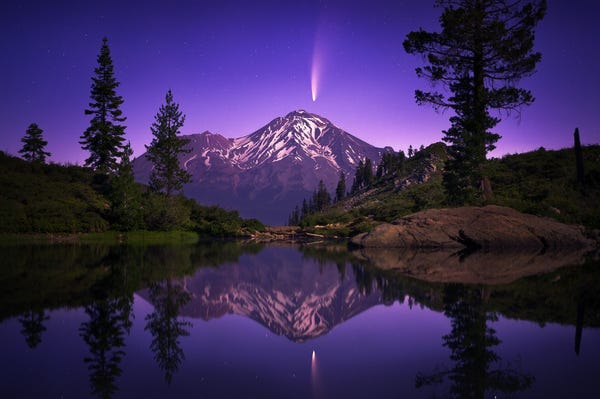 Smith and his friend Jasman Mander drove to Shasta-Trinity National Forest and hiked an hour to Heart Lake — a mirror pool situated below the summit — to watch the comet emerge around 4 a.m.

"We brainstormed ideas and locations only to both come to the conclusion that this location was the one," Smith said on Instagram. "Nature laid up this absolutely perfect window of a composition."

Mander also made a video of the comet rising above the mountaintop.

Comet #Neowise Rising Above Mt. #Shasta. Quick little timelapse I made waiting for my shot that I shared earlier.

"We were speechless as we took in this incredible moment together," Mander said in his own Instagram post. "We figured something would be visible from here, but we did not expect such a beautiful and dramatic display out there tucked into the Cascades."

Another time-lapse video shows the comet streaking above early-morning fog and a chorus of frogs.

Mark McCaughrean, the senior advisor for science and exploration at the European Space Agency, stitched together 106 photos to make the video above.

In some northern regions, photographers even caught Neowise against the backdrop of the aurora.

The comet overshadowed a lightning storm in Wyoming's Bighorn Mountains.

"It seems like the tail gets a little longer every day," photographer Kevin Palmer said on Twitter.

Astronomers expect Comet Neowise to be visible to the naked eye on dark nights through early August.

Photographer Leon Kauffman, who captured the shot below, said on Twitter that in long-expsoure images of the comet, "what the camera picks up is more brilliant that what you see with the naked eye."

Neowise will be highly visible after sunset from Tuesday through Sunday. 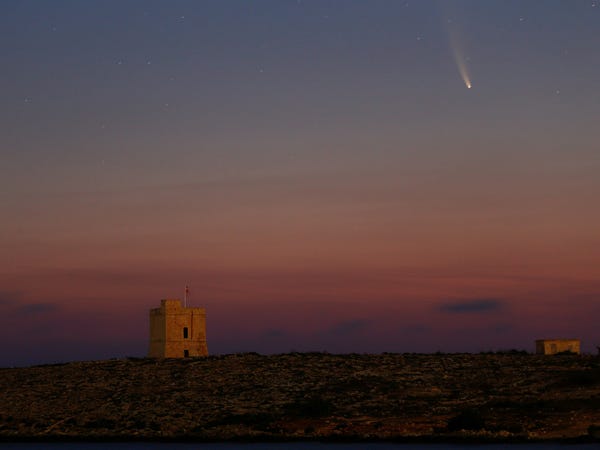 In that period, according to Space.com, the comet's best "prime-time" viewing hours will come in the evening, about 80 minutes after sunset.

To see the comet, wake up before dawn and look toward the sky close to the horizon. You won't need a telescope or binoculars.

The comet is expected to get closest to Earth on July 23. It will get within about 64 million miles, according to NASA. 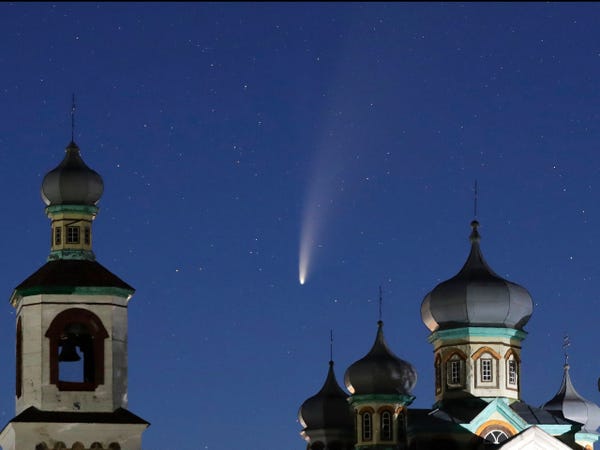 Then it will rocket away again, towards the edges of the sun's reach. It won't return to the inner solar system for 6,768 years. 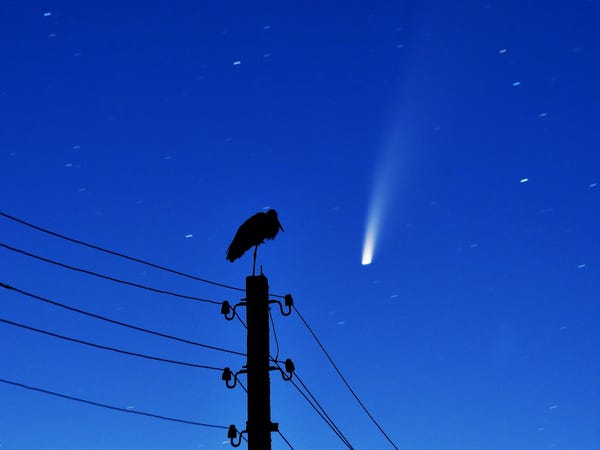 So soak up the views while you can.