Follow
Home » Science » Comet NEOWISE: Where can I see the comet tonight?

Comet C/2020 F3 NEOWISE is racing across the northern skies this month, offering a unique and rare sight for astronomers in the Northern Hemisphere. The comet was discovered in March and on July 3, NEOWISE survived its closest flyby of the Sun and is now headed past Earth. On July 23, the comet will swing by Earth from a distance of about 64 million miles.

But the comet is already visible and astronomers worldwide are captivated by its tails.

As they race through the solar system, comets are followed by two tails – one of gas and one of duty debris – that are lit up by the Sun.

With a bit of luck and a pair of binoculars, you should be able to see Comet NEOWISE between now and July 31.

Some astronomers suspect the comet might even be bright enough to see without equipment. 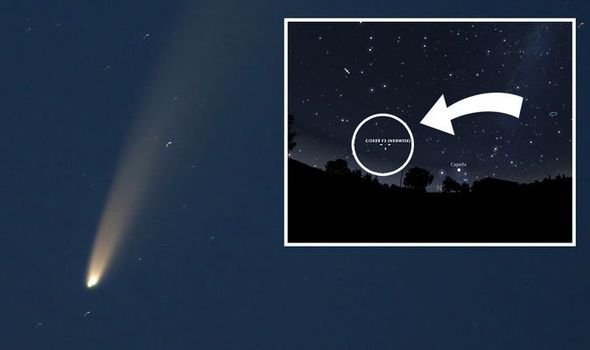 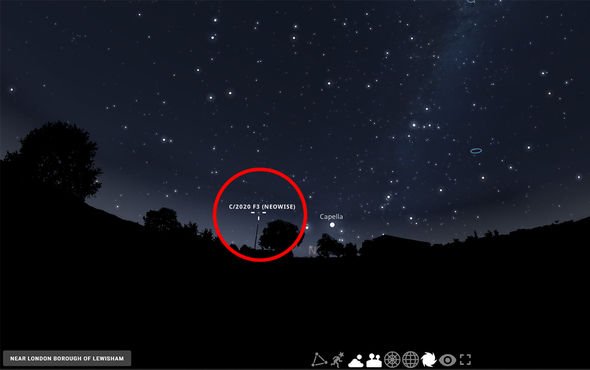 Where can you see Comet NEOWISE tonight?

Comet NEOWISE last entered the solar system about 4,500 years ago and will not reappear for another 7,000.

So this might be your last chance to see the comet in action.

NEOWISE is visible from the Northern Hemisphere, tracing an arc across the north to northwest skies.

At the start of the month, the comet first appeared below the bright star Capella. 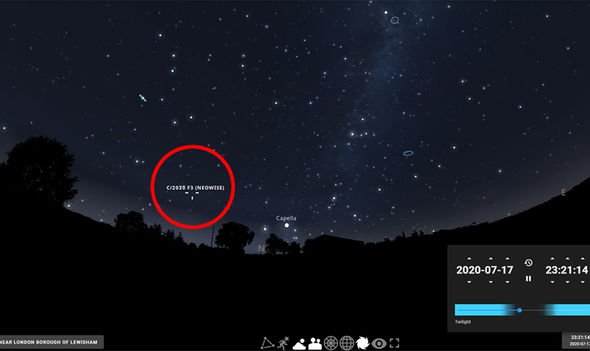 NEOWISE is now approaching the seven stars of the Big Dipper and will pass below them until the end of the month.

According to the Royal Astronomical Society, it is critical you have an unobstructed view of the horizon if you go looking for NEOWISE.

Similarly, try to avoid all sources of light pollution – cars, buildings, street lamps – that can hinder your effort.

Astronomer Dr Robert Massey said: “There are reports of people being able to see it with the naked eye under good conditions, but some optical aid will always improve the view.” 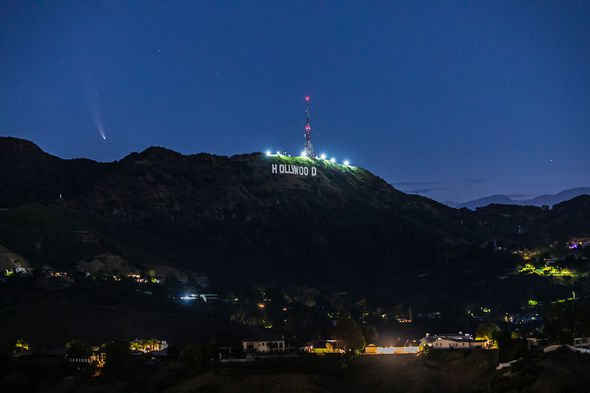 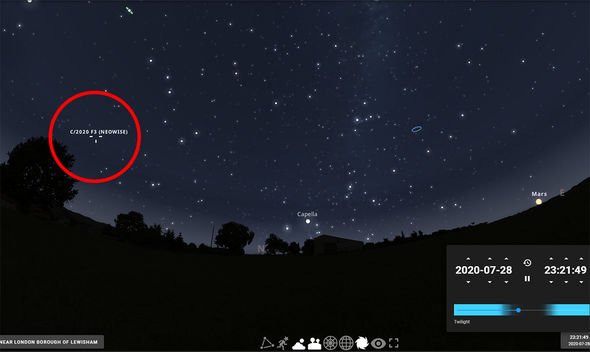 If you have a pair of binoculars, use them to locate the fuzzy comet.

Once you have closed in on NEOWISE, put your binoculars away and see if you can make out the comet’s tail with the naked eye.

The further up north you live the better your viewing options will be.

Astronomer Eddie Irizarry wrote in an article for EarthSky.org: “The good news is that – if the comet continues looking great – the view during the night of closest approach should be nice for many of us at temperate latitudes in the Northern Hemisphere.

“Although binoculars are required for the celestial visitor, it will be visible at the same time we see a beautiful Crescent (not too bright) Moon.”

What time should you look for the comet?

In the first half of July, Comet NEOWISE was best seen in the early morning hours before sunrise.

But heading into the second half of the month, astronomers expect the comet to become increasingly visible in the evening.

Websites like TimeandDate.com can tell you when the Sun will rise and set for your exact location.

Professor Irizarry said: “If the comet remains at its current brightness, it might be even easier to spot in the evening during the second half of July than it has been in the morning sky so far.

“The comet will be gradually higher each night, just below the Big Dipper.”