Did life once exist on Mars? Study of Martian rock suggests the planet developed habitable conditions 100 million years before Earth

A primordial soup similar to the one that is believed to have brought forth life on Earth may have existed on Mars in the early history of the solar system.

Experts analysed the oldest directly dated material known to exist from the red planet, a meteorite that fell to Earth that was discovered in the Sahara in 2011.

By studying it, they found that the primordial Martian crust formed no later than 4.5 billion years ago.

The emergence of a stable crust is a fundamental step in the early history of rocky, potentially habitable planets, experts say.

The study’s findings suggest processes involved in the creation of Mars’ crust were completed less than 20 million years after our star system had formed.

It also predates Earth’s by around 100 million years, leading to the possibility life may have sprung up earlier on the red planet than on our own. 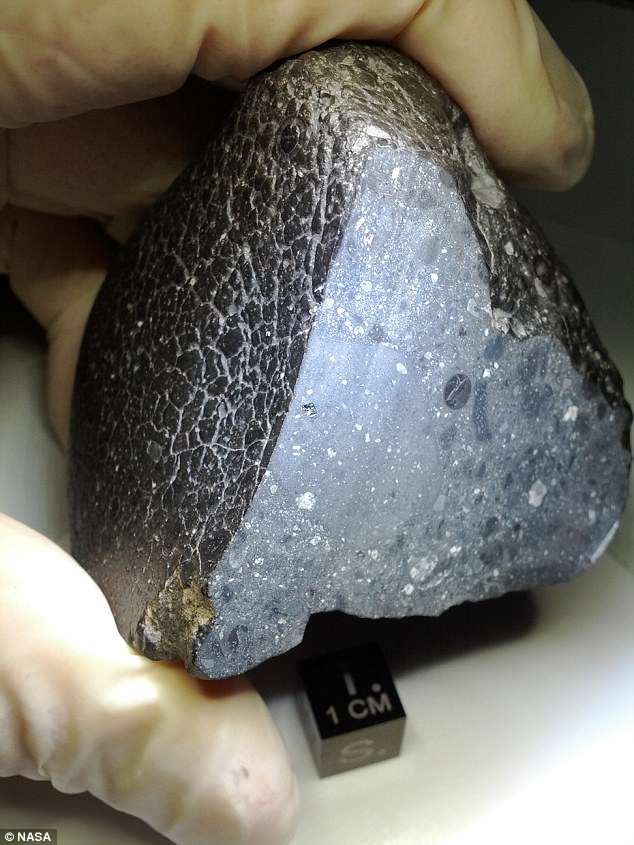 A primordial soup similar to the one that is believed to have brought forth life on Earth may have existed on Mars in the early history of the solar system. Experts analysed a meteorite that fell to Earth and was discovered in the Sahara in 2011 (pictured) to make the finding

‘During their formation, many rocky planets go through a phase known as a magma ocean, during which they are mostly or completely molten’, Linda Elkins-tanton, an Arizona State researcher who was not involved in the study, said in a News and Views article published in Nature.

‘Many researchers thought that the solidification of Mars’s magma ocean was protracted, perhaps lasting for up to 100 million years (Myr) after the ocean’s formation.

‘But (the researchers) show that this process was completed in less than 10 Myr. The finding suggests that habitable conditions existed on Mars up to 100 Myr before they did on Earth.’

Researchers from the University of Copenhagen made the finding by studying a meteorite known as NWA 7034, or Black Beauty.

Scientists extracted seven zircons – minerals very resistant to heat and corrosion – from a sample of Black Beauty, thought to have originated from the southern highlands of Mars.

Using a dating technique known as uranium–lead isotope, they found that the zircons were approximately 4,476 to 4,429 million years old. 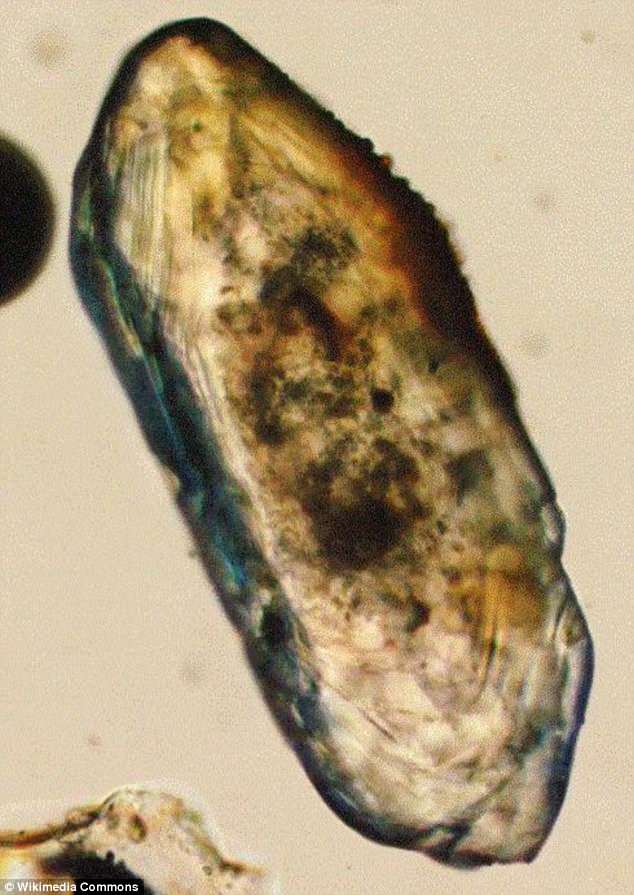 Scientists extracted seven zircons – minerals very resistant to heat and corrosion – thought to have originated from the southern highlands of Mars. This stock image shows a microscope closeup of a zircon crystal of about 250 µm – more than twice the size of those studied

WHAT IS METEORITE NWA 7034 – ALSO KNOWN AS BLACK BEAUTY?

Northwest Africa (NWA) 7034, nicknamed Black Beauty, led to the creation of a new class of meteorite when it was discovered in 2011 in the Sahara Desert.

After more than a year of intensive study, a team of US scientists determined in 2013 that the meteorite formed 2.1 billion years ago.

This was during the beginning of the most recent geologic period on Mars, known as the Amazonian.

Previous studies by Nasa have also found that Black Beauty contains around ten times more water than other Martian meteorites.

NWA 7034 is made of cemented fragments of basalt, rock that forms from rapidly cooled lava.

The fragments are primarily feldspar and pyroxene, most likely from volcanic activity.

This unusual meteorite’s chemistry matches that of the Martian crust as measured by NASA’s Mars Exploration Rovers and Mars Odyssey Orbiter.

Researchers theorise the large amount of water contained in NWA 7034 may have originated from interaction of the rocks with water present in Mars’ crust.

The meteorite also has a different mixture of oxygen isotopes than has been found in other Martian meteorites, which could have resulted from interaction with the Martian atmosphere.

This suggests that the accretion of Mars, the layering of material around the planet’s core to form a crust, was largely complete within approximately five million years of the formation of the Solar System.

Using this information, combined with the composition of the zircons, the team suggest that a primordial crust existed on Mars by 4,547 million years ago.

It survived for approximately 100 million years before it was reworked, possibly by asteroid and other impacts, to produce the magmas from which the NWA 7034 zircons crystallised.

Previous studies by Nasa have also found that Black Beauty contains around ten times more water than other Martian meteorites.

The full findings were published in the journal Nature. 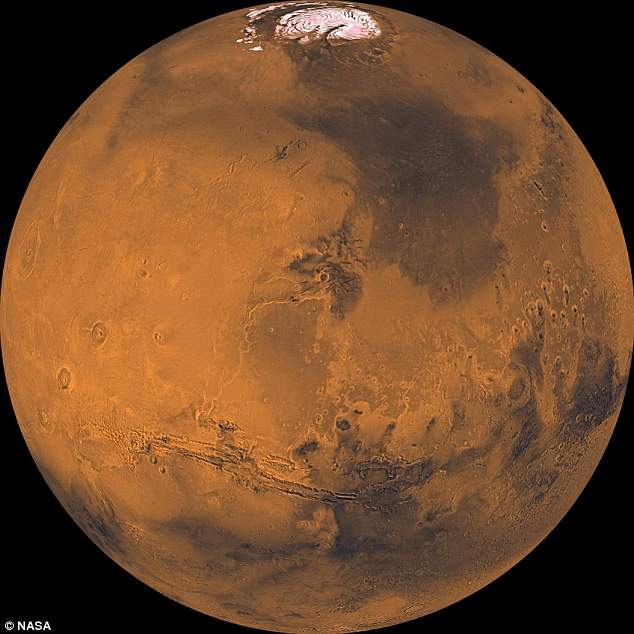 The emergence of a stable crust is a fundamental step in the early history of rocky, potentially habitable planets, experts say. The study’s findings suggest processes involved in the creation of Mars’ crust were completed less than 20 million years after our star system had formed

DO SCIENTISTS BELIEVE WE COULD EVER FIND LIFE ON MARS?

Over the years, scientists have found a number of promising signs that life may have been present on Mars, including evidence of water, chemical reactions, and expansive ice lakes beneath the surface.

Life on Mars is unlikely to have flourished on the surface, given the harsh conditions – including radiation, solar winds, and frigid temperatures.

As a result, many scientists believe organisms evolved to live beneath the surface of the Red Planet.

In November 2016, Dr Christian Schröder, an environmental science and planetary exploration lecturer at Stirling University, said: ‘For life to exist in the areas we investigated, it would need to find pockets far beneath the surface, located away from the dryness and radiation present on the ground.’

This is supported by evidence of water beneath the surface.

Researchers have identified mudstones and sedimentary bands on Mars, which only form when there is water present for thousands of years.

Vast oceans of ice have also been uncovered, lying just below the surface of the planet.

The presence of ice and water beneath the Red Planet greatly increases the chances that there was once at least microscopic life on Mars and that some form of the organism could be living there today.

‘It’s very exciting to understand the possibility that life could possibly have started on Mars before it lost its atmosphere, and perhaps even in the deeper surfaces, where water is still liquid because of the heat of the planet, perhaps there’s bacterial life.’

Having water just below the surface also means that human colonies could survive and even thrive on the planet and indicates that fuel for manned spaceflight could be manufactured there.

This is another key ingredient for life, and scientists say the find is a huge boost in the hunt for life.

Boron was unearthed in the Gale Cater, which is 3.8 billion years old, younger than the likely formation of life on Earth.

That means the conditions from which life could have potentially grown may have existed on ancient Mars, long before organisms began to develop on Earth.

A controversial 2001 study into a 4.5 billion-year-old meteorite, dubbed ALH84001, which was found in Antarctica’s Allan Hills ice field in 1984, claimed it had definitive prove of life on Mars.

Meteorite ALH84001 was blasted off the surface of Mars by a comet or asteroid 15 million years ago, and Nasa researchers said it contains proof the Red Planet was once teeming with bugs which lived at the bottom of shallow pools and lakes.

They also suggested there would have been plants or organisms capable of photosynthesis and complex ecosystems on Mars.

However British experts said at the time that the evidence, though exciting, had to be treated with caution and could not be taken as conclusive, since many non-biological chemical processes could also explain what was found.