Scientists have solved a longstanding reptilian mystery as to whether crocodiles emerged first in Africa or the Americas.

Analysis of a seven million-year-old specimen from an extinct African species shows it is closely related to modern-day American crocodiles.

However, the oldest crocodile ever found in the Americas is only five million years old.

As a result, scientists believe crocodiles, which first emerged in Australia, moved first into Africa before later conquering the Americas during the Late Miocene epoch which spanned from 11 to five million years ago. 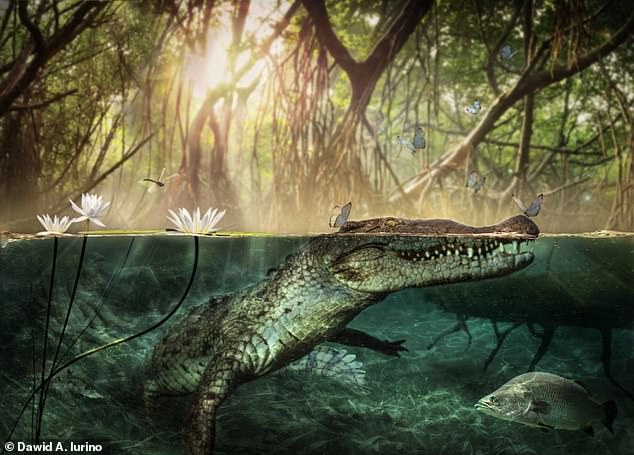 Scientists have solved a longstanding reptilian mystery as to whether crocodiles emerged first in Africa or the Americas. A specimen of the extinct species Crocodylus checchiai (artist’s impression, pictured) helped reveal it was Africa first, then the Americas

The ancient crocodile skull is stored at the Earth Sciences museum of Sapienza University of Rome and was first discovered in 1939 during excavations in Libya.

Academics put the cranium through a CT scanner to take extremely detailed images of the skull and found some features which had not been documented previously.

Most notable is a protrusion in the middle of the snout of the animal, which belonged to the species Crocodylus checchiai.

An ancient 13-foot crocodile that lived in South Korea around 120 million years ago walked on two legs just like Tyrannosaurus rex.

Experts from South Korea, Australia and the US analysed well-preserved fossil tracks, which were found at the Sacheon Jahye-ri dig site in South Korea.

Initially, experts thought that the trace fossils must have been created by another ancient reptile — a pterosaur — that could fly but would have walked on two legs.

Further analysis, however, revealed that the prints have heel-to-toe impressions, which must have been made by a creature walking on the flat of its feet.

Although this animal was found in Africa, no other African crocodiles have this anatomical feature.

But four living crocodile species over the Atlantic in North and South America do have a very similar bump in the nose.

The researchers from the Autonomous University of Barcelona used this to try and piece together an evolutionary timeline of when the feature emerged and how it would have spread to different species around the world.

Previously, it was known that crocodiles first evolved in Australia, but it was a mystery if they reached the Americas from Africa, or vice-versa.

But, writing in their study published in Scientific Reports, academics say crocodiles reached America by migrating westwards from Australasia via Africa.

‘Thanks to our results, the late Miocene Crocodylus checchiai could offer… direct evidence for the dispersal from Africa to America and suggesting to discard the other option.’