DARPA is developing a high-tech suit to provide 100 percent survival rate for warfighters against biological attacks.

The ensemble is set to be lightweight and designed with smart materials that act as a barrier to neutralize deadly agents should any come in contact with the skin, airway or eyes.

Dubbed Personalized Protective Biosystem, the suits will pull inspiration from natural systems like shark’s skin, as this creature’s skin keeps microorganism from attaching to the surface.

The Pentagon agency aims to have the ensemble remain effective for deployments up to 30 days and protect the wearer against 11 different attacks. 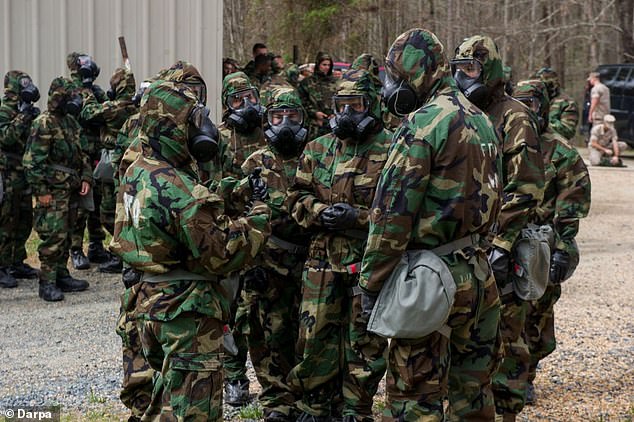 The ensemble is set to be lightweight, unlike the current suits that are bulky (pictured), and designed with smart materials that act as a barrier to neutralize deadly agents should any come in contact with the skin, airway or eyes

‘The current threat environment consists of broadly acting, highly pathogenic, and sometimes immediately lethal threats that are capable of entering the body via multiple pathways, including skin, airway, ocular, and the gastrointestinal tract,” DARPA wrote in the announcement.

‘Despite substantial financial investments and advances in the CB [chemical and biological] Defense enterprise over many decades, current personal protective equipment solutions add logistical, mobility, and thermal challenges to the warfighter/stability operations care provider, which place their missions at risk.’

The current protection is made of bulky, thick materials paired with respiration devices that can limit the soldier’s mobility.

However, Personalized Protective Biosystem (PPB) will use ‘cues from natural systems’, such as shark’s skin, according to the report.

The Pentagon agency aims to have it remain effective for deployments up to 30 days and protect the wearer against 11 different attacks. The suit will block the agents if they come in contact with the wearer

The agency continued to discuss how shark’s skin has antimicrobial capabilities – it stops microorganisms from attaching to its surface, as reported by Nextgov.

Humans also have an internal warning systems that can sense and respond, protecting against environmental bacterial and fungal infection.

‘Molecular, nano, and other material solutions, when coupled with lessons from natural systems, will be integral for PPB technologies to protect against current and future CB threats,’ DARPA noted in the report.

At the end of the program, officials foresee the ensemble providing 100 percent protection against lethal exposure from 11 different agents, including Influenza, viral hemorrhagics and sulfur mustards.

DARPA has laid out a 60 month plan for designing, testing and delivering the technology.

To test the ensemble’s protection, the organization will run strap it to a model or ‘robotic humanoid manikins’ for at least 30 days with exposures of CB lasting up to 12 hours.

The DoD also announced last year that it was building a radical X-ray bomb that could knock out chemical and biological weapon sites without spreading the chemicals over a large area.

The secretive project has been under development since at least 2015.

The DoD has contracted specialist electronics company Hyperion Technology Group to develop a prototype, which would fit inside an existing warhead casing, and could also be used in close combat.