Dead Russian satellite and discarded Chinese rocket are at ‘very high risk’ of colliding at 33,000mph tonight – and could smash into thousands of pieces increasing space junk by up to a FIFTH

An out-of-commission Russian satellite and a discarded Chinese rocket orbiting the Earth more than 600 miles above the surface have a ‘very high risk’ of colliding tonight.

LeoLabs, a firm that tracks space debris, reveals these objects are likely to pass less than 40 feet from each other, and shared a model that shows a 10 percent chance of the two smashing into each other at 20:56 ET on Thursday (01:56 BST Friday) just above Antarctica.

The objects have a combined mass of 2.8 metric tons and the impact would add thousands of pieces of space junk – anywhere from 10 percent to 20 percent more debris – to the 170 million currently floating in orbit.

The speed of the collision between the Russian Kosmos-2004 satellite and the Chinese Chang Zheng 4C rocket would be around 14.7km per second (32,882 miles per hour), LeoLabs estimates.

Although there is no threat to people on Earth, the man-made materials would pose a significant risk to functioning satellites in orbit. 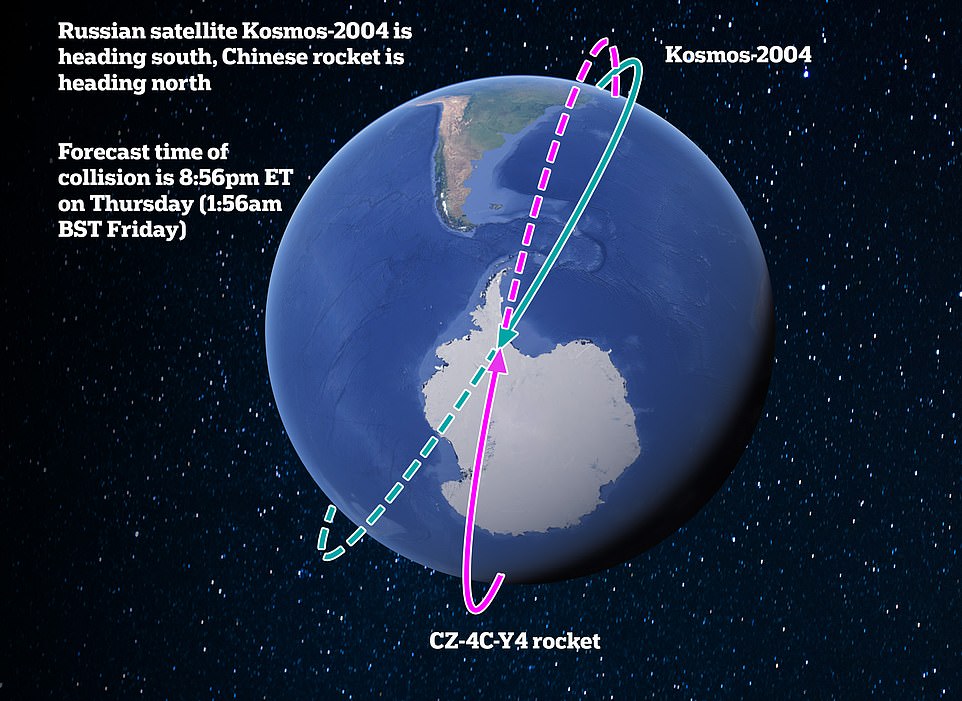 An out of commission Russian satellite (Kosmos-2004) and a discarded Chinese rocket (CZ-4C) floating in orbit more than 600 miles above Earth’s surface are at risk of colliding. Image shows the two trajectories and where they’d hit, just above Antarctica. Russian Kosmos-2004 moving towards the southern poles and the Chinese satellite is heading north

LeoLabs, based in California, shared a model on Twitter announcing the possible collision that is set to occur Thursday.

‘This event continues to be very high risk and will likely stay this way through the time of closest approach,’ the firm shared in the tweet.

Astronomer Jonathan McDowell weighed in on the event with a model prediction.

The image shows the Russian Kosmos-2004 moving towards the southern poles and the Chinese Chang Zheng 4C heading north over the Falklands.

And the predicted paths suggest the two could eventually meet head on. 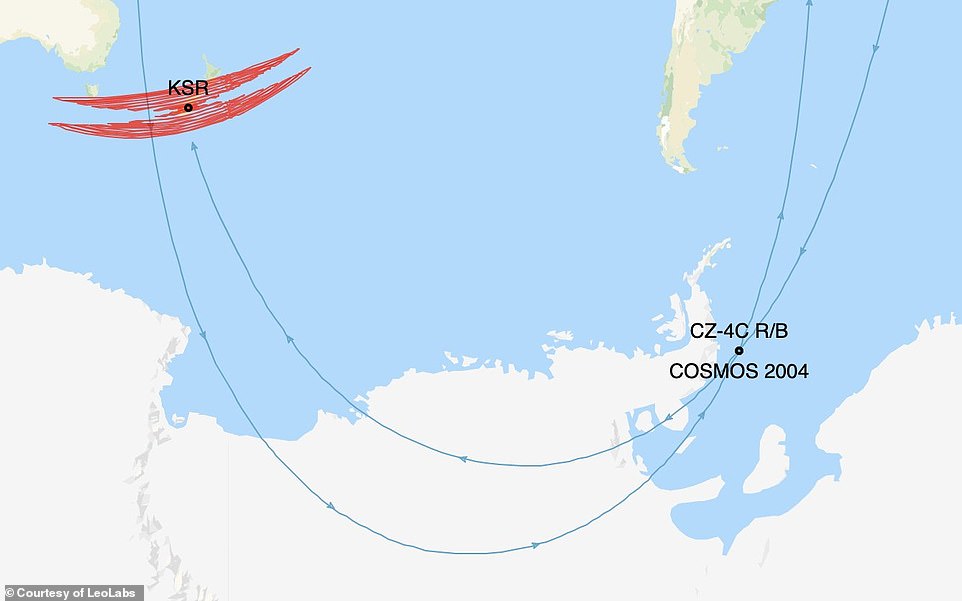 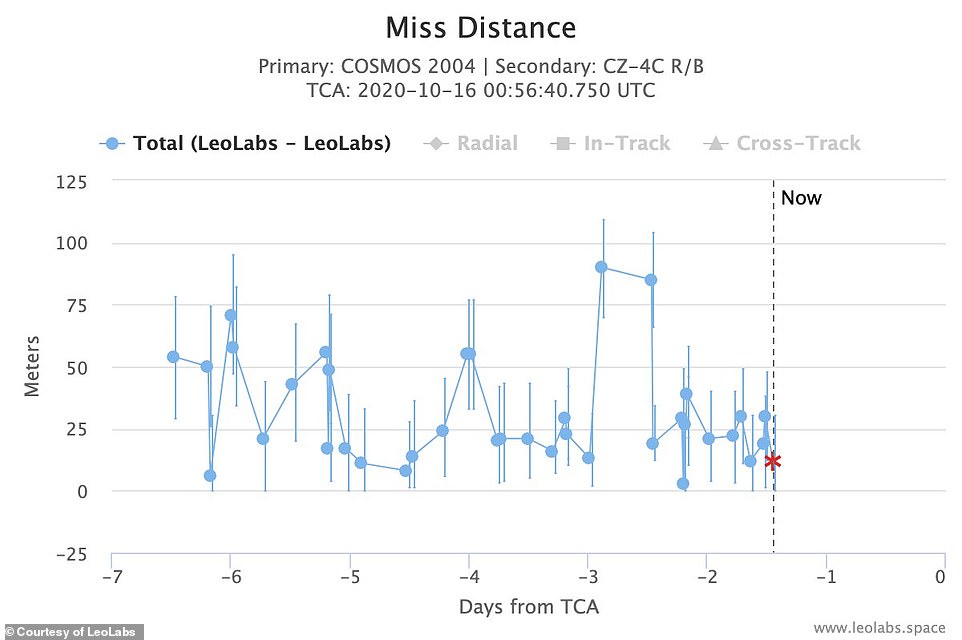 LeoLabs , a firm that tracks space debris, reveals these objects will pass less than 82 feet apart and shared a model that shows a 20 percent chance of the two smashing into each other 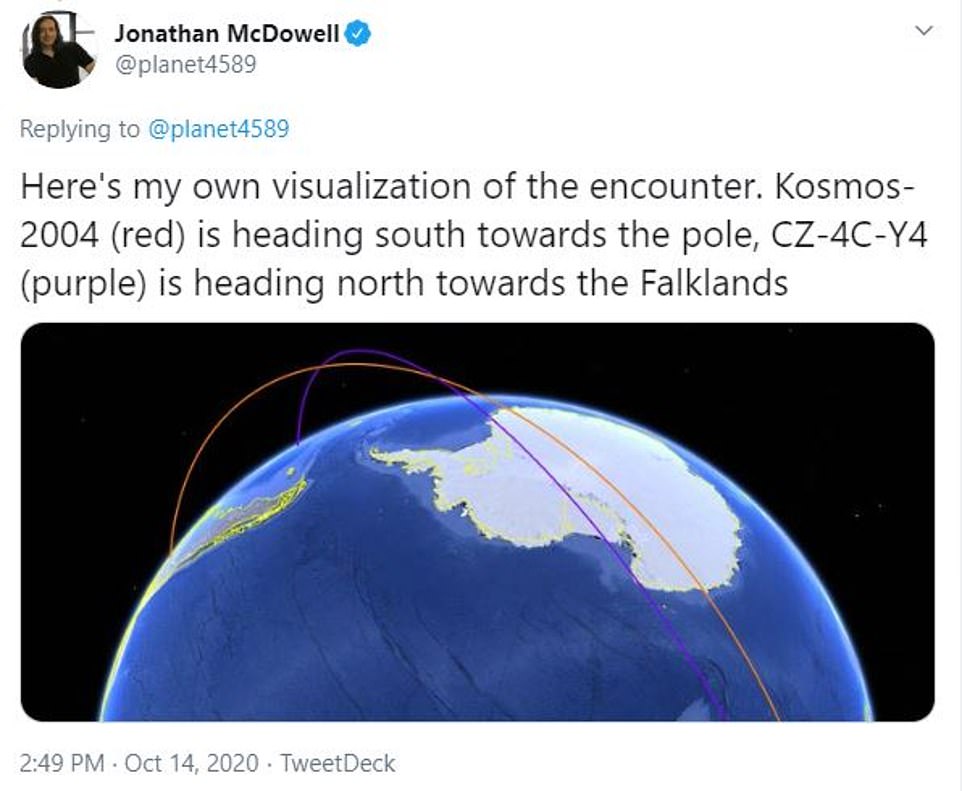 Astronomer Jonathan McDowell weighed in on the event with a model prediction. The image shows the Russian Kosmos-2004 moving towards the southern poles above Earth and the Chinese Chang Zheng 4C is heading north over the Falklands

McDowell also notes that the two breaking apart during impact will add 10 to 20 percent more space junk into orbit.

‘It’s going to leave a mess… any resulting debris would continue travelling in orbit at high speed,’ he said.

However, the Aerospace Corporation, based in California, calculated a much lower chance of collision – one in 250,000 million.

‘I don’t mean to throw any shade whatsoever on [LeoLabs’] process or their sensors or anything else,’ Ted Muelhaupt at the Aerospace Corporation told Business Insider.

‘But the sensors, the data we have access to says we’re pretty confident [the satellites] are not going to hit.’ 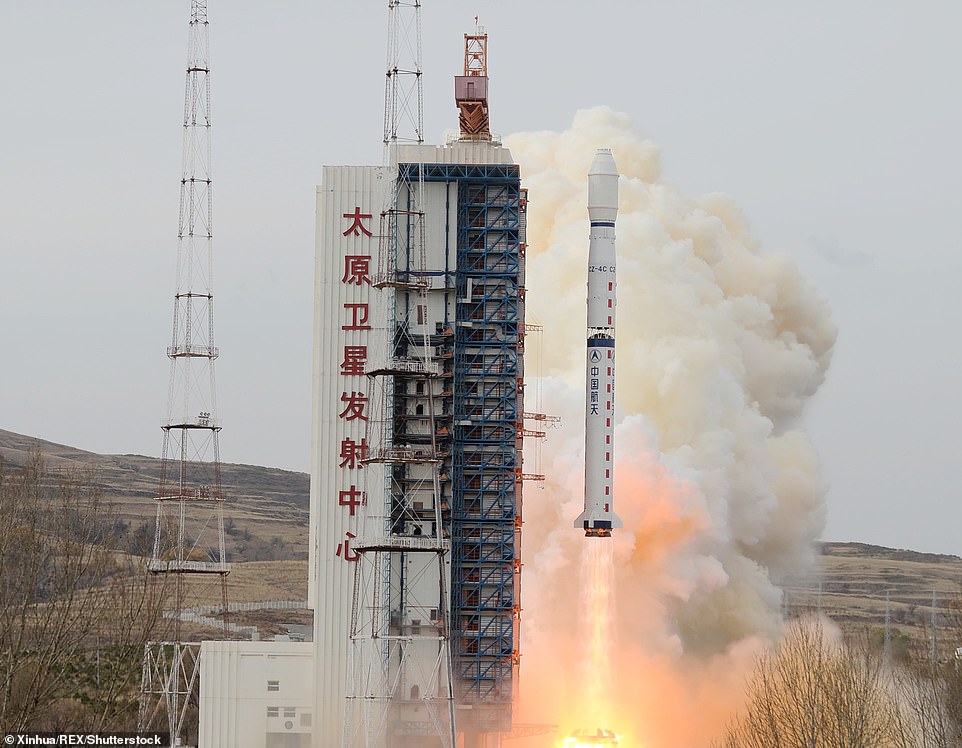 A Chang Zheng 4C carrier rocket, like the one on the collision course, blasts off from the launch pad at the Taiyuan Satellite Launch Center in Taiyuan, capital of north China’s Shanxi Province, in October 2014

A report released in May shows Russia is responsible for a majority of space junk floating in orbit – with some 14,403 pieces.

Russia has contributed the most in the past two years, but the country has recently dumped 65 more pieces into orbit.

A rocket in May used to launch a scientific satellite into space broke apart after nine years in orbit and left dozens of pieces of debris around Earth.

The Fregat-SB is a type of space tug and its upper stage was left floating after it helped deliver the Spektr-R satellite in 2011, according to Roscosmos. 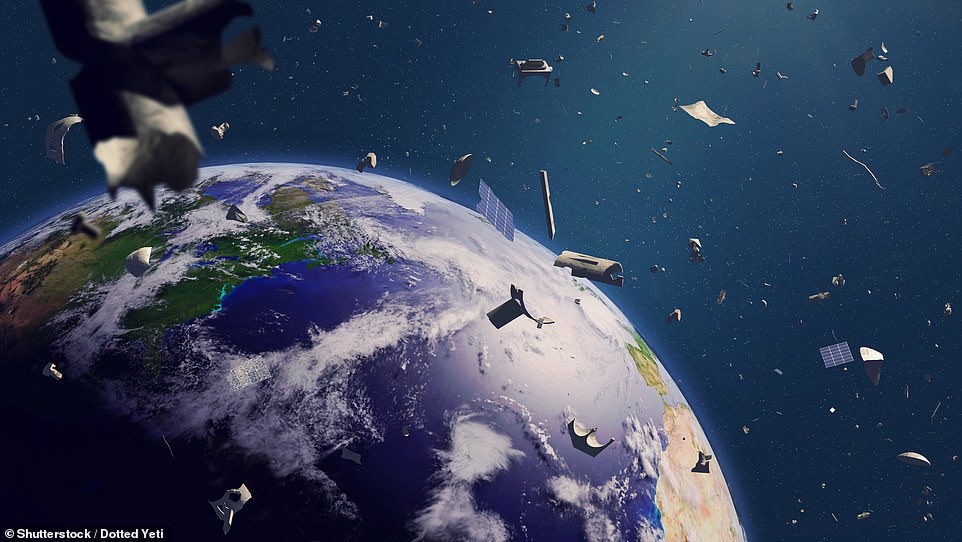 An expert notes that the two breaking apart during impact will add 10 to 20 percent more space junk into orbit. These pieces can destroy satellites, telescopes, spacecraft

Spektr-R was a radio telescope launched by the Russian space agency but it stopped responding to ground control last year and was declared dead in May 2019.

Roscosmos confirmed the breakdown of the rocket happened on May 8 somewhere above the Indian Ocean.

These pieces can destroy satellites, telescopes, spacecraft and one NASA scientist fears they could eventually create the Kessler syndrome.

Researchers from the University of Colorado Boulder say an international agreement would be needed in order to charge operators ‘orbital use fees’ for every device launched into orbit.

The amount charged would increase each year to 2040 up to $235,000, according to the team, who say the orbit becomes clearer each year, reducing the risk costs.

But only 22,000 are tracked, and with the fragments able to travel at speeds above 16,777 mph (27,000kmh), even tiny pieces could seriously damage or destroy satellites.

And, Dead, Def, Russian, satellite
You may also like:

Expert explains ‘out of body experience’ that occurs after you die