A fossilised tail from a dinosaur that roamed the world 125million years ago has been discovered at the bottom of a crumbling cliff on the Isle of Wight.

The fossilised remains of the the dinosaur — believed to be an iguanodon — were found embedded at the base a cliff-face near Brighstone.

But excavations and attempts to salvage the tail for detailed analysis are currently being thwarted, due to safety risks posed by the crumbling cliff. 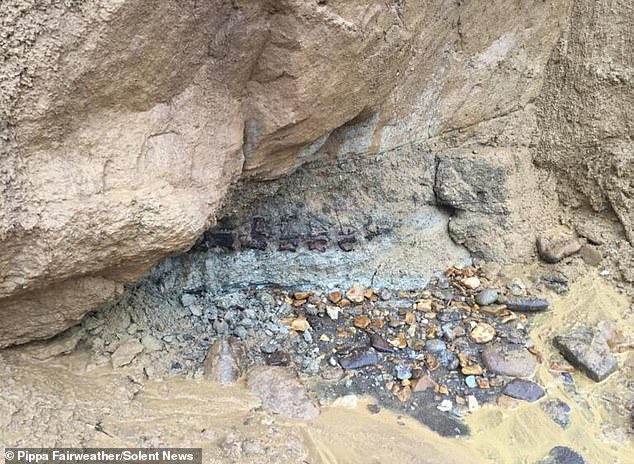 Beach-goer Pippa Fairweather, 45, discovered the fossil in a cliff face near Brighstone on the Isle of Wight, describing the find as ‘pretty impressive’.

It is thought around six vertebrae have been uncovered, and Isle of Wight radio reports that the dinosaur died and was exposed to the elements for several months before being buried by a large flash flood.

Iguanodons were herbivores that measured up to 30 feet (10 metres) tall and weighed more than four tons (4,000kg).

Oliver Mattsson, an expert from the Dinosaur Farm near to the find on the Isle of Wight, said: ‘Complete skeletons of the iguanodon have been found but we don’t know how much of this one is there, because it is inaccessible due to the safety risk being too great.

‘Given the cliff as it is, and the rain we have been having, it is unsafe to go near it.

‘The iguanodon is the most common type found, as the dinosaur has been found on all continents.’

Ms Fairweather, who is from Freshwater on the island and runs an online retail shop, said it is between Brighstone’s Grange Farm and Isle of Wight Pearl.

She adds: ‘But is in a seriously over-hanging cliff which seems to be crumbling constantly, so people need to be super careful.’

Experts are also urging locals to not attempt to extract the fossil for risk of damaging it or endangering themselves.

WHAT IS AN IGUANODON DINOSAUR?

Iguanodon is a genus of herbivorous dinosaurs which could grow to the size of an African elephant and run at 14mph (23kmh).

They walked the earth around 132 million years ago, during the Lower Cretaceous period.

Different species flourished in both Europe and North America.

They would have been prey for one of England’s biggest predators, Baryonyx, a relative of Spinosaurus.

These large dinosaurs were able to walk on both two legs or all four.

They had a highly specialised, five-fingered hand which would have made them excellent foragers.

The thumb spike is one of their best-known features.

It would have made an excellent stiletto-style weapon against predators and also could have been used to break into fruit.

It’s believed they held their long, heavy tail high in the air for balance.

The genus was named in 1825 by English geologist Gideon Mantell.