Star lizard: Dinosaur with a parrot-like beak, bony frills and a huge horn has been named in honour of David Bowie

An exuberant dinosaur with a parrot-like beak, bony frills, a huge horn on its nose and a ‘star-like’ skull has been named in honour of British rock musician David Bowie.

US palaeontologists have given the dinosaur genus the name Stellasaurus, meaning ‘star lizard’, based on a fossilised skull found in Montana.

The genus name Stellasaurus, or ‘star lizard’, is derived from ‘stella’, which is Latin for star, and ‘saurus’, which is Greek for lizard.

The name is a reference to the overall ‘star-like appearance’ of the skull, and a homage to Bowie’s hit 1972 single ‘Starman’. 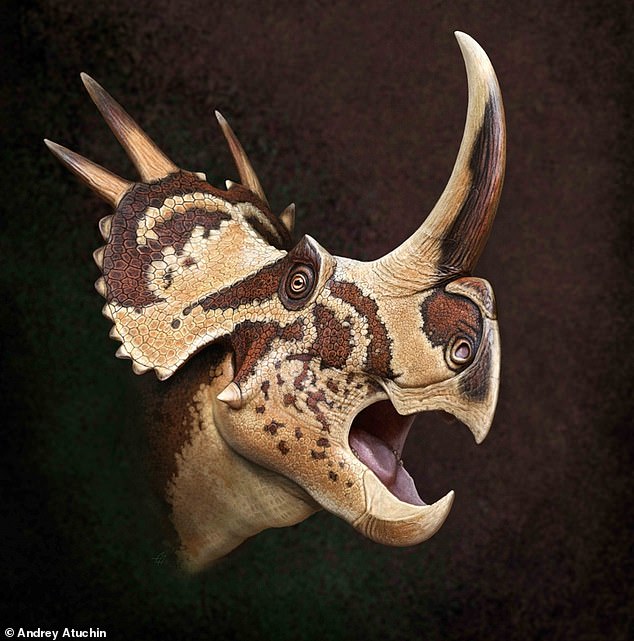 Stellasaurus ancellae is a member of the plant-eating horned ceratopsid dinosaurs, which lived during the Cretaceous and evolved many different forms of ornamentation on their skulls

The fossilised remains of the creature found in Montana have been given the species name Stellasaurus ancellae – the first member of the new Stellasaurus genus.

During its existence across the barren American terrain during the Cretaceous period, Stellasaurus ancellae would have relied on its stunning horns to attract mates – much like the promiscuous Bowie’s loud outfits during his glam phase.

‘The skull ornamentation is astonishing – almost star-like,’ said palaeontologist Jack Wilson at Montana State University’s Department of Earth Sciences, who has confessed to being a lover of British pop and rock.

STELLASAURUS DATES BACK TO THE CRETACEOUS PERIOD

The Mesozoic Era is a the name given to the period from 250 million to 65 million years ago.

The era is divided into three major periods: Triassic, Jurassic and Cretaceous.

The new species discovery dates back to the Cretaceous period – 145 million to 66 million years ago.

Mesozoic was the age of the dinosaurs and lasted almost 180 million years.

The Mesozoic Era followed the Paleozoic Era, during which arthropods, molluscs, fish and amphibians all evolved.

Mesozoic was followed by the Cenozoic Era, during which the continents assumed the configuration that we know today.

The skull of Stellasaurus includes a long, upright horn above the nose, very small pointed horns above the eyes and a frill at the back of the head with four spikes – two long and two short.

‘Ceratopsids evolved many different forms of ornamentation on their heads including horns above the nose, eyes and large bony frills which projected from the back,’ Professor Wilson said.

‘The horns and frills were display structures for mating purposes, similar to the diverse and elaborate feathers of some birds such as peacocks.

‘These horns and frills evolved quickly and were unique to each individual.

‘They are useful in determining species and finding new ones – like Stellasaurus.

The remarkably preserved skull was discovered near the town of Cut Bank, Montana, close to the US-Canadian border in 1986 by field palaeontologist Carrie Ancell who works at the Museum of the Rockies in Bozeman, Montana.

Professor Wilson said the ‘Bowie dino’, which is only just being christened and described, is a missing link in the dinosaur family tree. 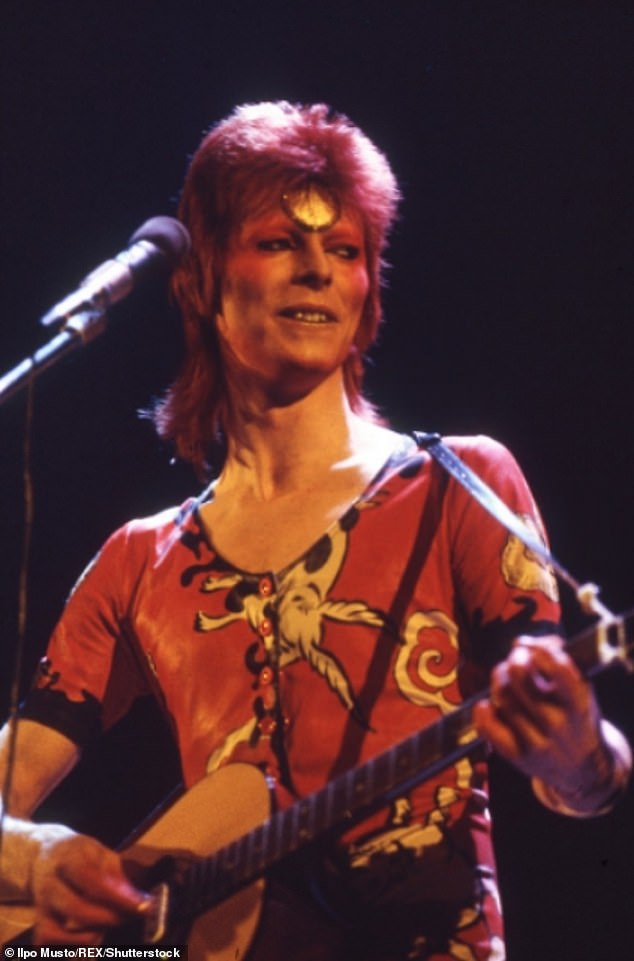 ‘The ornamental horns and spiky frills on the skulls of these animals are what changed the most through evolution,’ said Wilson.

‘The new species has skull ornamentation which is intermediate.

‘This gives us evidence these species are members of a single, evolving lineage – this type of evolution is called anagenesis.’

The hypothesis, which was laid out by famous paleontologist Dr Jack Horner back in 1992, has been confirmed by Stellasaurus.

Likewise, Bowie appearance ‘evolved’ to become less outlandish and more conservative, right up to his austere ‘Berlin trilogy’ phase in the late 1970s.

Stellasaurus has been further described in Royal Society Open Science.

‘The science of Stellasaurus is remarkable and tells the story of millions of years of unbroken evolutionary change within a single lineage,’ said Professor Wilson.

The latter include Stellasaurus whose skull was unearthed in 1986 by field palaeontologist Mrs Carrie Ancell – after whom the creature is also named.

The rocks from which Stellasaurus was excavated represent ancient silts and muds which were deposited on a coastal floodplain. 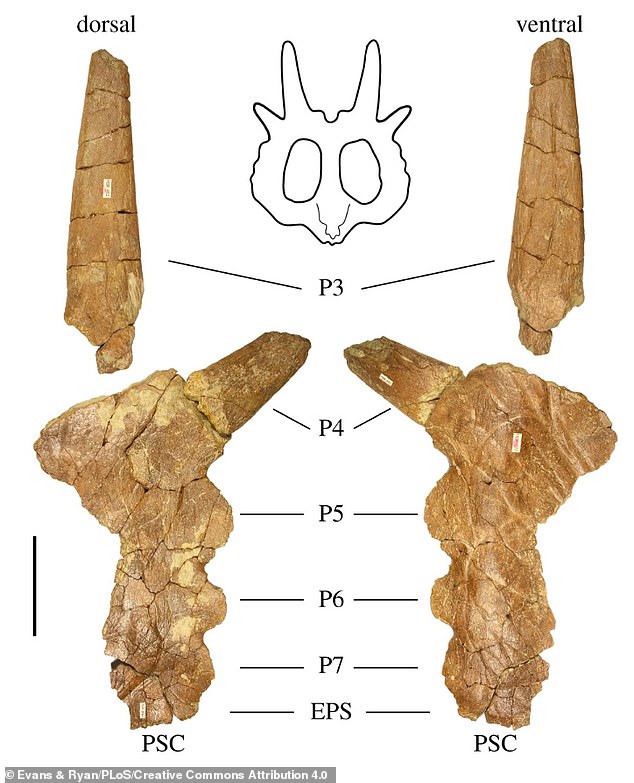 Photo of an isolated and fragmentary partial skull of the ceratopsid, preserving the left lateral ‘parietal’, the main bone in the frill at the back of the head. The spikes are part of the parietal

During the Late Cretaceous, North America was split by a sea, and ceratopsians, including Stellasaurus, were on the western side – beside the young Rocky Mountains.

‘They lived in ecosystems with many other types of dinosaurs, such as T Rex, small meat-eating raptors, duck-billed hadrosaurs and armoured ankylosaurs, Professor Wilson said.

‘There were also extinct flying reptiles called pterosaurs, small mammals, turtles, crocodiles and many other types of animals.’

Stellasaurus is the most spectacular in a long line of animals that honour Bowie – including a wasp and a spider.

‘Heteropoda davidbowie’ is a species of the huntsman spider native to parts of Asia, in reference to the Bowie song ‘Glass Spider’ from his derided 1987 album Never Let Me Down and his more acclaimed 1972 album ‘The Rise and Fall of Ziggy Stardust and the Spiders from Mars’.

Meanwhile, the Archaeoteleia astropulvis species of extinct wasp that lived at the same time as the dinosaurs 100 million years ago was named after a Latinized version of the word ‘stardust’.

‘Star’ was a reoccurring word in Bowie’s career – he created the alter-ego Ziggy Stardust, which contributed to his huge popularity in the 1970s, and named his final album ‘Blackstar’, which was released two days before his death in 2016.

Ceratopsians were ornithischians, or ‘bird-hipped’ dinosaurs.

The oldest ceratopsians appeared at the beginning of the Cretaceous, about 140 million years ago.

In the Late Cretaceous, about 100 million years ago, the ceratopsians began to diversify in North America and in Asia.

The horned, frilled dinosaurs in the family Ceratopsidae are found only in the Late Cretaceous of North America; they are among the last of the dinosaurs.

Their “beak” and rows of grinding cheek teeth suggest that they fed on tough vegetation.

The huge, heavy “frill” of ceratopsians such as Triceratops may have served as armour against the attacks of saurischian predators like Tyrannosaurus, which lived in the same time and place. 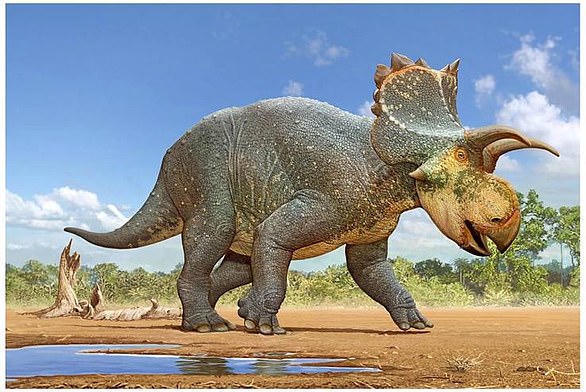 Artist’s impression of a triceratops, which is perhaps the most famous of all the Ceratopsians

a, Be, dinosaur, parrot-like, With
You may also like:

The US is betting on 3 types of coronavirus vaccines, one of which is totally unproven. A diagram shows how they differ.