Disturbing app can create nude images of ANY woman

A disturbing app has been developed which uses artificial intelligence and algorithms to produce fake nude images of women.

Since the app came to light, it has been taken offline, claiming it ‘cannot cope’ with the volume of interest.

The anonymous developers said they would be back within days and just needed ‘to fix some bugs and catch our breath’.

In the free version of the app, the output images are partially covered with a large watermark.

In a paid version, which costs $50, the watermark is removed, but a stamp that says ‘FAKE’ is placed in the upper-left corner. 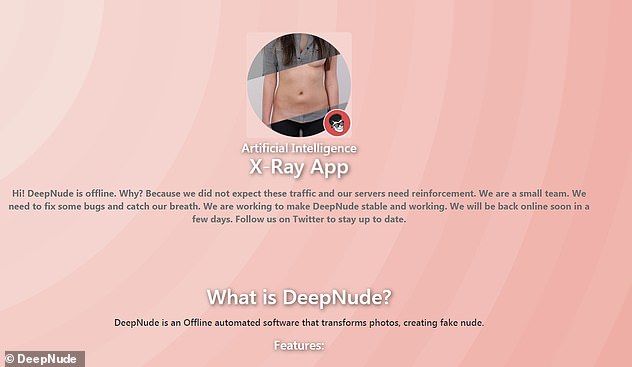 DeepNude’s website calls itself ‘an Offline automated software that transforms photos, creating fake nude’. It has been taken down since it received publicity

It is a downloadable offline app which works on Windows and Linux.

It is believed the software is based on pix2pix, an open-source algorithm developed by University of California, Berkeley researchers in 2017.

Pix2pix uses generative adversarial networks (GANs), which work by training an algorithm on a huge dataset of images.

A picture is inputted to the software and a nude version is then generated at the touch of a button.

US magazine Vice tested the app on dozens of photos and got the most convincing results on high resolution images from Sports Illustrated issues.

The app is not capable of producing nude images of men and, when attempted by Vice, created a picture of a man with a vulva.

It can be downloaded on Windows and Linux.

Vice downloaded the application and tested it on a Windows machine. It installed and launched like any other Windows application and didn’t require technical expertise to use.

The anonymous creator, who requested to go by the name Alberto, said that the software is based on pix2pix, an open-source algorithm developed by University of California, Berkeley researchers in 2017.

Pix2pix uses generative adversarial networks (GANs), which work by training an algorithm on a huge dataset of images.

In the case of DeepNude, more than 10,000 nude photos of women, the programmer said—and then trying to improve against itself. 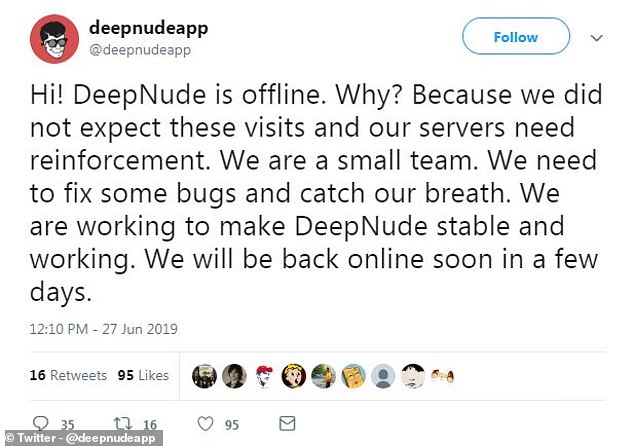 This algorithm is similar to what’s used in deepfake videos, made to trick viewers into thinking someone did something they didn’t and what self-driving cars use through deep learning.

Alberto told Vice that he was inspired by X-ray spec ‘Like everyone, I was fascinated by the idea that they could really exist and this memory remained,’

The fake images are easy to mistake for the real thing, and could cause untold damage to individuals’ lives.

Cropping out the ‘fake’ stamp or removing it with Photoshop would be very easy.

Motherboard tested it on images of women and men, in varying states of dress—fully clothed to string bikinis—and a variety of skin tones.

When fed a well lit, high resolution image of a woman in a bikini facing the camera directly, the fake nude images are passably realistic.

The algorithm accurately fills in details where clothing used to be, angles of the breasts beneath the clothing, nipples, and shadows.

But it’s not flawless. Most images, and low-resolution images especially, produced some visual artifacts.

There are forums where men can pay experts to create deepfakes of co-workers, friends, or family members, but tools like DeepNude make it easy to create such images in private, and at the touch of a button.

app, can, create, Disturbing, Nude
You may also like: