Ditching fossil fuels would cost £73TRILLION but reduce demand by 57%

Ditching fossil fuels globally and using just wind, water and solar will cost £73TRILLION – but would slash power demand by more than HALF and save 63,000 lives a year from air pollution

Ditching polluting fossil fuels in favour of water, wind and solar energy is within reach for most of the world’s major countries.

However, the hefty price tag is a cost well worth paying, according to a team of researchers at Stanford University.

They say that, if all nations achieve this feat, it will reduce energy needs by 57 per cent while simultaneously creating almost 30 million jobs.

In the US alone, the move to clean energy in line with the ‘Green New Deal’ would save 63,000 people from air pollution-related death. 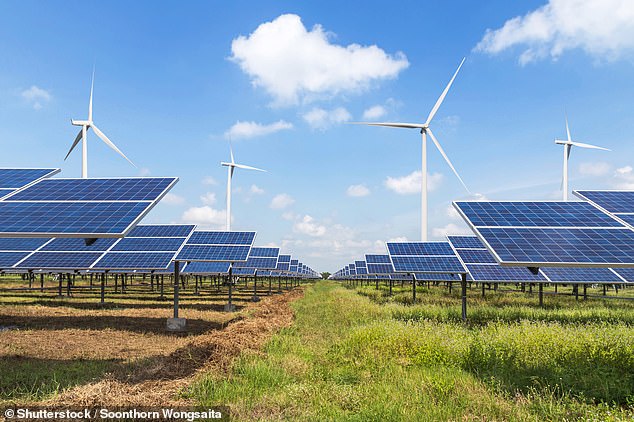 Ditching polluting fossil fuels in favour of water, wind and solar energy is within reach for most of the world’s major countries. A study has found that 143 countries around the world can run off 100 per cent clean energy by 2050 – but at a cost of £73trillion

Mark Jacobson of Stanford University assessed a trove of fresh data and looked at a situation where 143 nations made the switch compared to a business as usual model.

The team found that, on a global scale, energy demands would be slashed and the switch would also reduce energy, health, and climate costs by 91 per cent.

‘There are a lot of countries that have committed to doing something to counteract the growing impacts of global warming, but they still don’t know exactly what to do,’ says Professor Jacobson.

‘How it would work? How would it keep the lights on? To be honest, many of the policymakers and advocates supporting and promoting the Green New Deal don’t have a good idea of the details of what the actual system looks like or what the impact of a transition is. It’s more an abstract concept.

‘So, we’re trying to quantify it and to pin down what one possible system might look like. This work can help fill that void and give countries guidance.’

The team made road maps for nations which would take them to the doorstep of a carbon-zero future.

They focus around electrification and two main goals –  wind, water, and solar infrastructure supplying 80 per cent of power by 2030 and 100 per cent of all power by 2050.

This goes for all energy sectors, including transportation; building heating and cooling; industry; agriculture, forestry, and fishing; and the military.

Efficiency gains from moving away from fossil fuels and investing in hydrogen fuel cells and electric heat pumps would make a huge impact.

Also, the researchers point out, there will be no emissions produced by the mining, transportation and refining of fossil fuels, if they are not being used.

The road maps seem daunting, the researchers acknowledge, but would only require 0.17 per cent of the 143 countries’ total land area for new infrastructure.

Many people are worried the need for more solar farms and wind turbines will ruin the natural countryside, but less than a half per cent of land will be taken up. 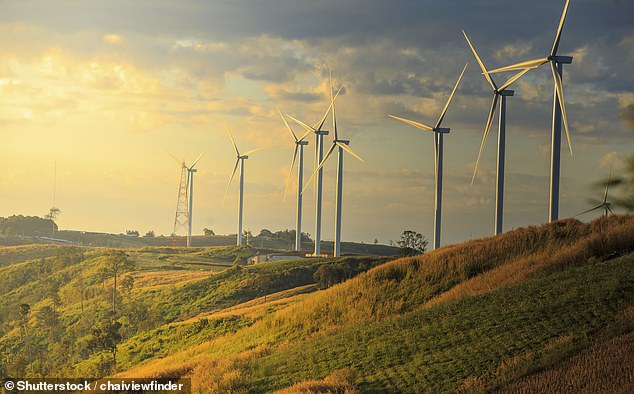 Mark Jacobson of Stanford University assessed a trove of fresh data and looked at a situation where 143 nations made the switch compared to a business as usual model. They found that, on a global scale, energy demands would be slashed by 57% and  create 28.6 million jobs

HOW DO WIND TURBINES WORK?

Wind turbines operate on a simple principle- the energy in the wind turns propeller-like blades around a rotor.

The rotor is connected to the main shaft, which spins a generator to create electricity.

They work in the opposite way to a fan, instead of using electricity to make wind, like a fan, wind turbines use wind to make electricity.

There are two main types of wind turbine that operate on the same basic principle.

Off-shore ones are larger and tend to create more energy and are often built in large groups, known as wind farms.

These provide bulk power to the National Grid.

‘We find that by electrifying everything with clean, renewable energy, we reduce power demand by about 57 per cent,’ Professor Jacobson says.

‘So even if the cost per unit of energy is similar, the cost that people pay in the aggregate for energy is 61 per cent less.

‘And that’s before we account for the social cost, which includes the costs we will save by mitigating health and climate damage.

‘That’s why the Green New Deal is such a good deal. You’re reducing energy costs by 60 per cent and social costs by 91 per cent.’

Researchers delved into the US road map, as the US is the second-highest contributor of greenhouse gases in the world, accounting for more than ten per cent of global emissions.

They say the proposed Green New Deal will cost $7.8 trillion, with this money going towards 288,000 new large wind turbines and 16,000 large solar farms.

This would take up grand total of 1.08 per cent of US land, with over 85 per cent of that land used for spacing between wind turbines.

The plan states it will create 3.1 million more US jobs than the business-as-usual case, and saves 63,000 lives from air pollution per year.

Co., Ditching, fossil, fuels, Would
You may also like: