Drones are flying underground in Japan to inspect the Tokyo Metro

Maintenance workers in the bowels of the Tokyo Metro system are being assisted by emote-controlled 8.5-inch wide drones.

The remote-controlled 2.5 pound (1.15kg) drone is encased in a plastic sphere to protect it from any unfortunate bumps and knocks while navigating the labyrinth.

Cameras on the custom-built drone will allow operators to scan hard to reach parts of the tunnel network for signs of damage.

Current methods involve humans using a torch and looking up to see signs of damage and then having to use vehicles and platforms to reach them. 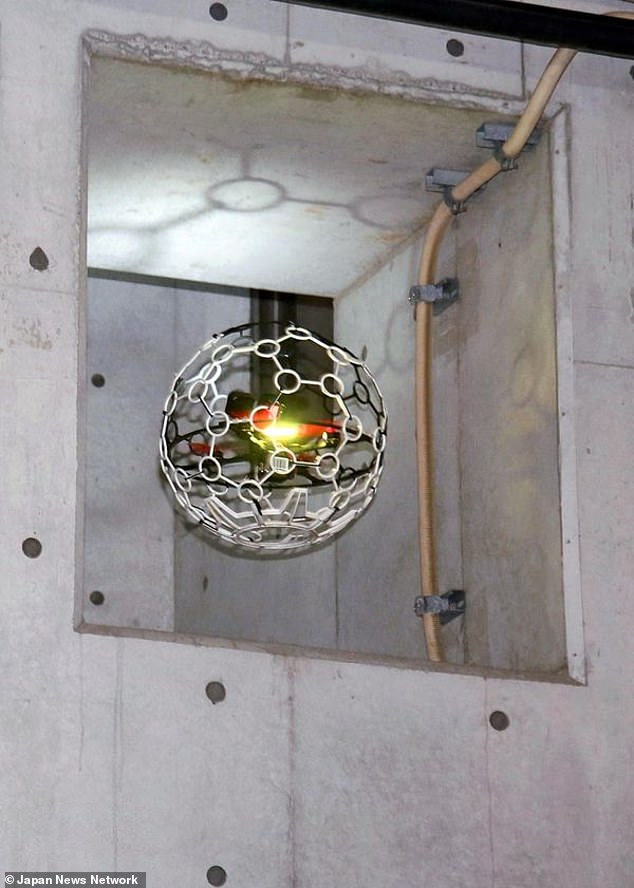 Maintenance workers in the bowels of the Japanese metro system are being assisted by 8.5-inch wide drones. The remote-controlled 2.5 pound (1.15kg) drone is encased in a plastic sphere to protect it from any unfortunate bumps and knocks in the labyrinth

Tokyo Metro runs 85 per cent of the sprawling subway network of the nation’s capital city and is using the drones to inspect upper regions of the tunnels.

The drones are small and easy to control and their inspections do not require the time-consuming and expensive erection of platforms and scaffolding.

They can also get closer to the walls to search for signs of deterioration that a human being can, Japan News reports.

A Tokyo Metro drone was first launched on February 6 on the Hanzomon Line and a press event revealed the technology this week.

There are plans to roll out drone inspections to all its nine lines in future.

‘We want to use drones to do more for safety,’ a company official said.

The drone can fly for up to five minutes continuously at an altitude of up to 164 feet (50 meters) above from the operator.

In a demonstration, an employee flew a drone through a training tunnel and used on-board cameras to capture images of areas near the ceiling and vents.

The video can be live streamed onto computers so engineers can scour for signs of weakness that would require further inspection.

HOW COULD DRONES BE USED TO SPEED UP DELIVERIES?

Impatient shoppers will be pleased to hear that Amazon’s drones could significantly speed up the speed at which deliveries can be made.

The plan is for Amazon’s PrimeAir service to eventually deliver small packages weighing up to 5lbs (2.27kg) in 30 minutes or less.

Amazon got British approval for three new types of tests, including flying drones that are no longer within sight of their operators in rural and suburban areas.

The other two are having one person operate several highly automated drones and testing devices to make the drones able to identify and avoid obstacles.

During the test the drones will be only allowed to fly an altitude of 400ft (122m) and kept away from operating near airport flight paths.