Follow
Home » Science » Earth is a spaceship, and the Amazon is a crucial part of our life-support system, creating up to 20% of our oxygen. Here's why we need the world's largest rainforest.

Earth is a spaceship, and the Amazon is a crucial part of our life-support system, creating up to 20% of our oxygen. Here's why we need the world's largest rainforest.

The Amazon rainforest is burning: Brazil has seen more than 74,000 fires this year ⁠— nearly double 2018’s total of about 40,000 fires. About 10,000 new firesstarted in the last week alone, mostlylit by people clearing land for crops and grazing.

It’s a fitting analogy, since the Amazon plays a major role in many of the processes that make our planet habitable: water cycles, weather patterns, and the exchange of oxygen and carbon dioxide. The rainforest is also home to more than 30 millionpeople and over 10% of the world’s biodiversity. Scientists see potential for new medicines in unstudied Amazon plants.

The more than 2.5 million square miles of Amazon rainforest are also one of our greatest buffers against the climate crisis, since the trees absorb carbon dioxide, thereby keeping it out of the atmosphere.

But deforestation threatens all of that. Humans have cut down nearly 20% of the Amazon in the last 50 years, according to theWorld Wildlife Fund (WWF). If another 20% of the Amazon disappears, that could triggera “dieback” scenario in which the forest would dry out and become a savannah. That process would release billions of tons of carbon dioxide into the atmosphere and raise global temperatures. 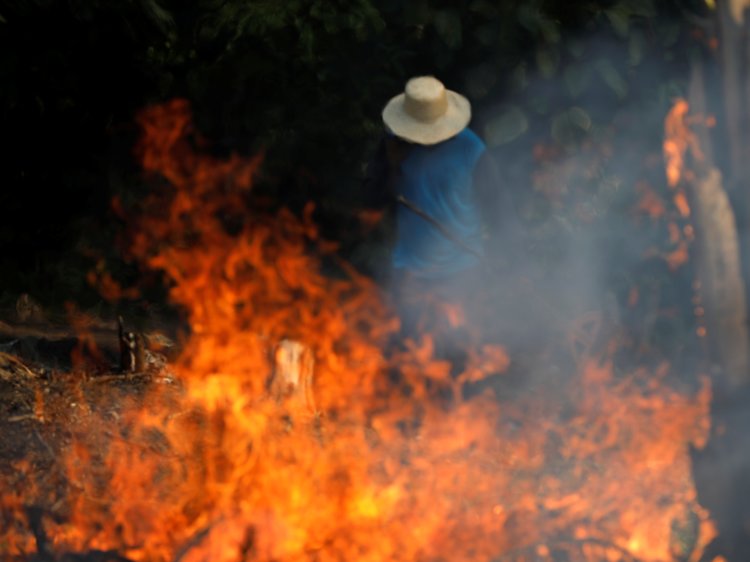 A man works in a burning tract of Amazon jungle as it is being cleared by loggers and farmers in Iranduba, Amazonas state, Brazil August 20, 2019.Bruno Kelly/Reuters

Here is what’s at risk if we lose the Amazon.

The ‘lungs of the planet’

The Amazon helps keep the atmosphere’s carbon-dioxide levels in check.

Plants and trees take in carbon dioxide and release oxygen back into the air through the process of photosynthesis. This is why the Amazon is often referred to as the “lungs of the planet”: It’s estimated to produce between 6% and 20% of the oxygen in Earth’s atmosphere. 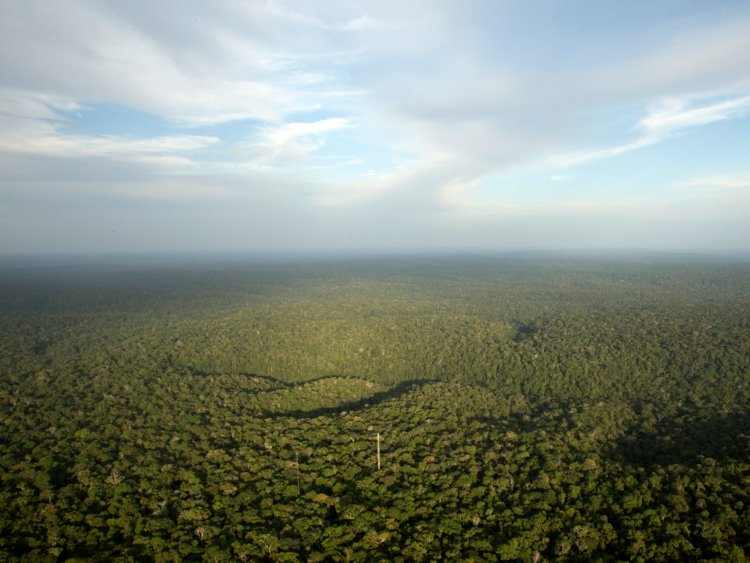 The Amazon produces up to 20% of the world’s oxygen, as plants absorb carbon dioxide and emit oxygen via photosynthesis.Reuters

Researchershave calculated that the Amazon holds up to 140 billion tons of carbon dioxide — the equivalent of 14 decades’ worth of human emissions.

“The Amazon is a major bank of carbon,” Ruth DeFries, an ecology professor at Columbia University,told Vice. “When trees gets burned and carbon is released into the atmosphere, that exacerbates our global warming.”

Fires aside, deforestation in the Amazon already releases half a billion tons of carbon dioxide each year, according toWWF.

Last month, the Amazon saw record-breaking rates of deforestation, primarily due toinfrastructure projects, logging, mining, and farming — much of which is not legal. Data from Brazilian satellites haveindicated that about three football fields’ worth of Amazonian trees are falling every minute.

An anchor for weather patterns 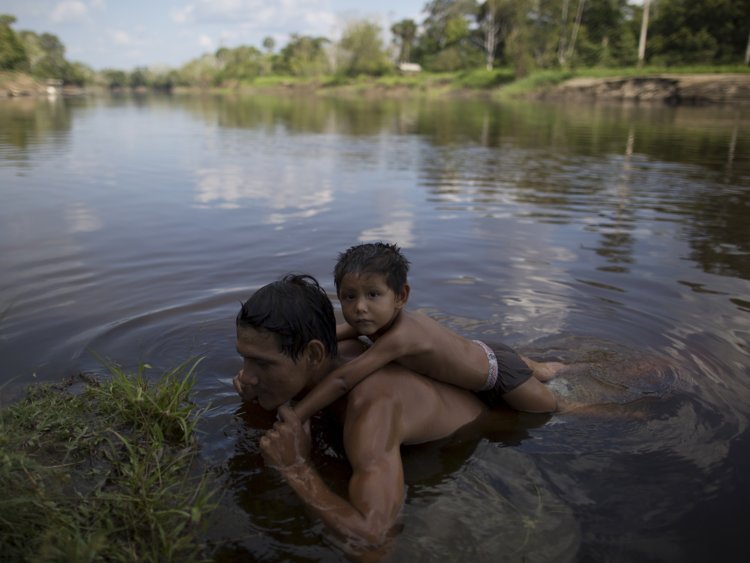 A man swims with his kid on the waters of the Parana do Amana river at Vila Nova do Amana community in the Sustainable Development Reserve, in Amazonas state, Brazil, September 22, 2015.Bruno Kelly/Reuters

A2018 report from the World Resources Institute (WRI) found that tropical deforestation disrupts the water cycle so much that it can threaten agriculture halfway around the globe.

“Tropical forest loss is having a larger impact on the climate than has been commonly understood,” the report authors wrote.

The Amazon plays a large role in rain patterns because the moisture that its vegetation traps and releases travels as clouds for thousands of miles.

Climate models show that the Amazon’s moisture affects rainfall as far away as the US. If the Amazon were completely deforested, that would cut Texas rainfall by 25%,cut the Sierra Nevada snowpack in half, and reduce precipitation by up to 20% in the US coastal northwest.

For that reason, large-scale deforestation in the Amazon can “pose a substantial risk to agriculture in key breadbaskets halfway around the world in parts of the US, India, and China,” according to the WRI report. 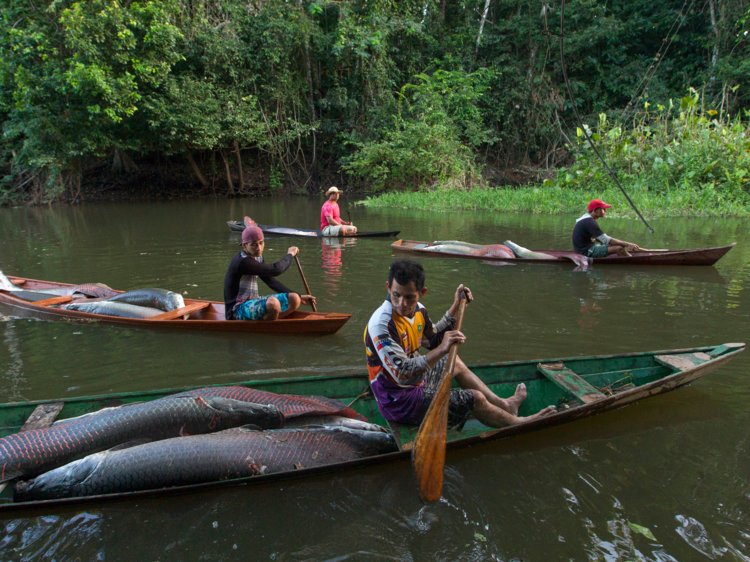 Villagers from the Rumao Island community paddle their canoes loaded with arapaima or pirarucu, the largest freshwater fish species in South America, while fishing in the Solimoes river, one of the main tributaries of the Amazon, in the Mamiraua nature reserve, November 24, 2013.REUTERS/Bruno Kelly

But scientists aren’t yet sure how changes in the Amazon River would affect this complicated meteorological system.

Degradation of the rainforest could also affect the biology of the Atlantic Ocean in unknown ways, since the Amazon Riverdumps debris from the forest into the Atlantic, and those nutrients feed phytoplankton that form the base of the ocean’s food chain.

Biodiversity that ‘brims with promise’ for new medicines 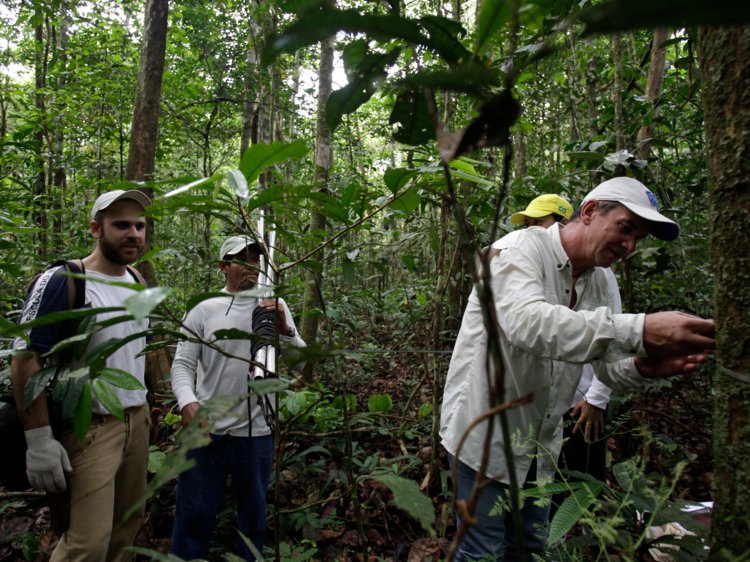 The Amazon is home to at least 10% of the world’s knownbiodiversity— and that’s just the life that we know about. A new species is discovered in the Amazon everytwo orthree days.

“Every species in this incredibly biodiverse system represents solutions to a set of biological challenges — any one of which has transformative potential and could generate global human benefits,” ecologist Thomas Lovejoy toldthe World Bank. “This rich wealth of species brims with promise, awaiting discovery.”

People have used Amazonian plants to produceanti-cancer drugs and the first anti-malarial drug, quinine. Yet scientists estimate that they have only studied 0.5% of the world’s flowering plants for theirmedicinal potential. 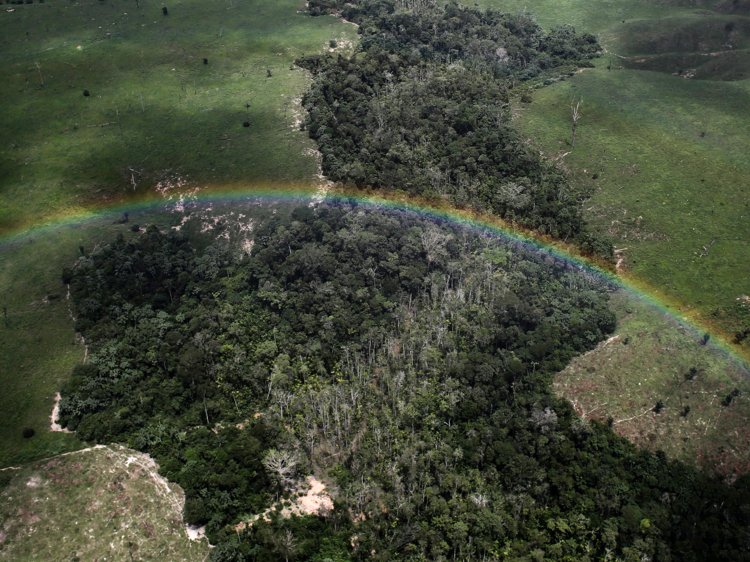 A rainbow is seen over a tract of Amazon rainforest which has been cleared by loggers and farmers for agriculture, near Uruara, Brazil on April 22, 2013.Nacho Doce/Reuters

The rich array of species in the Amazon arecrucial to the rainforest’s other functions, too.

The South American trees that absorb the most carbon dioxide rely on large birds and primates to eat their fruits and spread the large seeds inside, according to a recent WWFreport. Thick vines also hold up the structures of the trees whose leaves send water vapor into the atmosphere. And a variety of animals pollinate forest plants, disperse seeds, and nourish the soil with their waste.