Digging up the dead and performing elaborate funerals drove an artistic revolution 8,000 years ago with emphasis shifting from animal art to human shapes

As the focus shifted from animal art to human shapes 8,000 years ago there was an ‘artistic revolution’ driven by a rise in elaborate funeral rituals, study finds.

Archaeologists working in Jordan discovered a series of flint artefacts that look like stone tools – but they were never used and could have been funeral figurines.

The team say this suggests a link between an increasing emphasis on remembering the dead and changes in art styles during the Neolithic period.

At the time, in the early Neolithic, there was both a rise elaborate rituals linked to death and the deceased as well as more depictions of humans in artwork.

The artefacts were found at the site of Kharaysin in the Zarqa river valley by an international team including the Spanish National Research Council. 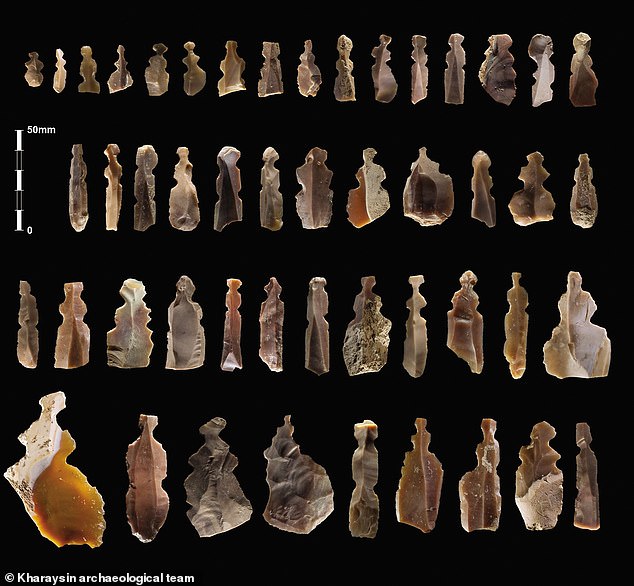 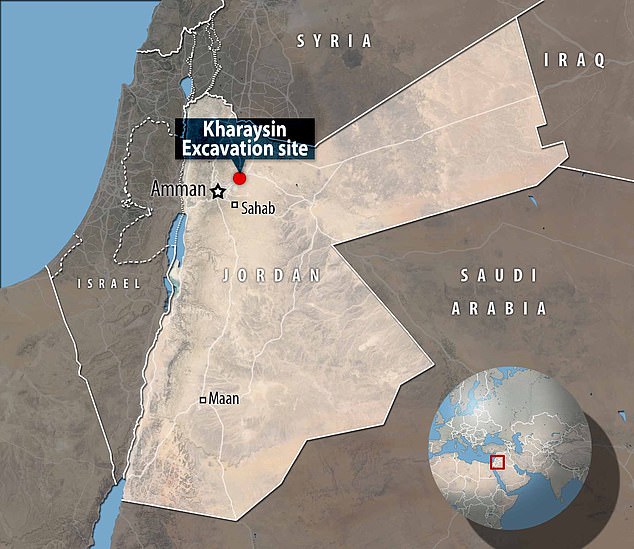 These unusual artefacts were found in a layer of the site dated to around 8th millennium BC, which places the discovery in the early Neolithic.

This was a dramatic period of prehistory, when the first farmers, monuments, and fixed human settlements developed in the Near East.

Earlier, animal images were common, but from around 8,500 BC human iconography became more widespread – this has been known for some time, but exactly why this shift happened has remained elusive – until this discovery.

Researchers say these artefacts, which could be humanoid figurines, may help to show the link between increasingly elaborate funeral practices and ‘human art’.

Most of the figurines were found in a funerary area containing seven original burials.

However, some of these were re-opened to remove pieces of the skeleton, including one who had their skull removed – possibly part of a ritual practice.

Another deceased individual was dug up from elsewhere and reburied in this funerary area, a process also repeated with several other pieces of skeleton.

Taken together, this area was likely in use for several years and involved funerals that did not end with the burial.

Graves continued to be reopened and the deceased, or at least parts of them, manipulated and moved; perhaps as part of a remembrance ceremony.

As most of the figurines were associated with this area, they may have been made for these funerals and memorials – a suggestion of ‘human art’ being made specifically for the purpose of supporting burial practices.

To understand the purpose of the unusual artefacts, the researchers investigated how they were made and whether they had any traces of damage, known as micro-wear, that might indicate what they were used for.

This revealed each item was likely made in one sitting, suggesting the design was deliberate, and that almost none had any signs they were used as tools.

When combined with their anthropomorphic shape, this lack of practical use suggests they were figurines. 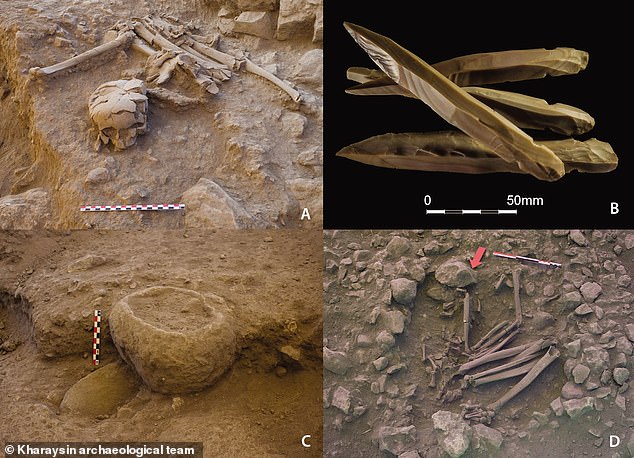 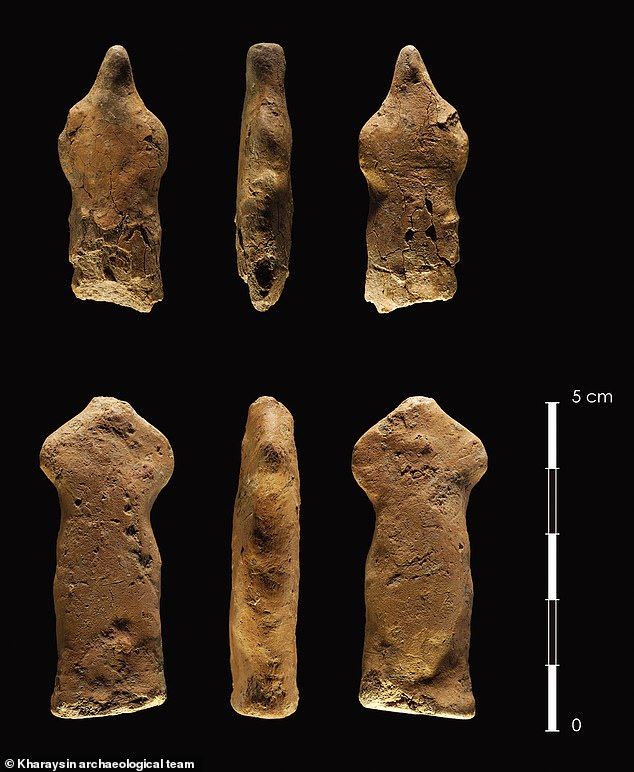 This conclusion was backed up by comparisons to other, clearer examples of figurines from Neolithic Jordan.

At ‘Ain Ghazal, for instance, human statues were found with the same ‘violin’ shape as the figurines from Kharaysin.

Kharaysin is a large site in Jordan spanning around 62 acres, of which less than one per cent has been excavated by the researchers.

They have already identified several key features of the site, such as a large funerary area, and the fact it consists of several phases of occupation.

These span from the 9th – 7th millennium BC, placing the site firmly in the Neolithic. 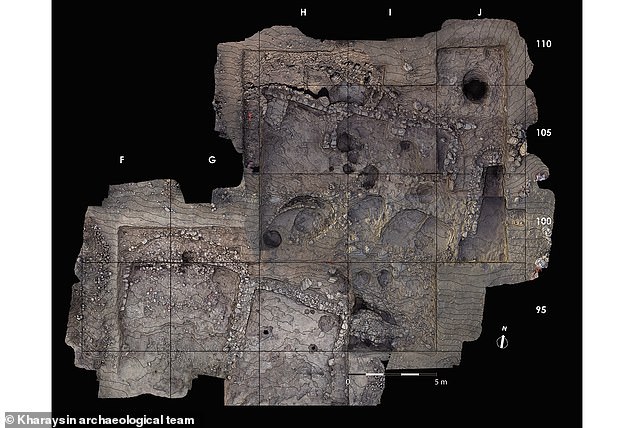 The researchers suggest that this increased focus on remembering the deceased might suggest a rise in ancestor worship amongst this community.

Although the exact role these figurines played is unclear, they do seem to have been associated with funerals and remembrance ceremonies, which were taking on increasing importance and complexity at this time.

This could explain the increasing frequency of anthropomorphic images at this key time in human prehistory.

The archaeologists believe that the figurines were involved in rituals, suggesting that these social changes had a far- reaching impact on the community, shaping their artistic culture as well.

Kharaysin was a Stone Age community, so much of their technology revolved around flint tools—the raw materials for which were readily available in the local area.

The findings have been published in the journal Antiquity.

WHAT DO WE KNOW ABOUT THE HISTORY OF THE STONE AGE?

The stone age is a period in human prehistory distinguished by the original development of stone tools that covers more than 95 per cent of human technological prehistory.

It begins with the earliest known use of stone tools by hominins, ancient ancestors to humans, during the Old Stone Age – beginning around 3.3 million years ago.

Between roughly 400,000 and 200,000 years ago, the pace of innovation in stone technology began to accelerate very slightly, a period known as the Middle Stone Age.

By the beginning of this time, handaxes were made with exquisite craftsmanship. This eventually gave way to smaller, more diverse toolkits, with an emphasis on flake tools rather than larger core tools.

The stone age is a period in human prehistory distinguished by the original development of stone tools that covers more than 95 per cent of human technological prehistory. This image shows neolithic jadeitite axes from the Museum of Toulouse

During the Later Stone Age the pace of innovations rose and the level of craftsmanship increased.

Groups of Homo sapiens experimented with diverse raw materials, including bone, ivory, and antler, as well as stone.

The period, between 50,000 and 39,000 years ago, is also associated with the advent of modern human behaviour in Africa.

Different groups sought their own distinct cultural identity and adopted their own ways of making things.

Later Stone Age peoples and their technologies spread out of Africa over the next several thousand years.