Elon Musk’s tunneling company has gotten the greenlight to get started on its next project.

The Las Vegas visitors authority selected the Boring Company to build an underground ‘people mover’ as part of a massive convention center expansion.

In a tweet late Tuesday, Musk said he expects the tunnel to be ‘operational by the end of [the] year.’ 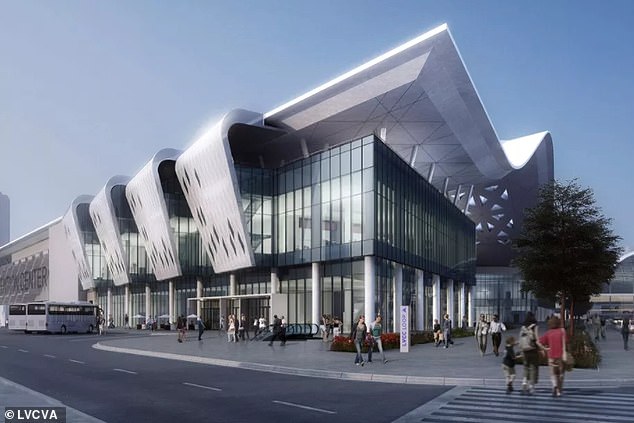 A concept design of the entrance to the Boring Company’s express-route loop tunnel in Las Vegas. Elon Musk said Tuesday that he expects the tunnel to be operational by late 2019

The Boring Company will design, construct and operate a convention center transport system consisting of a loop of express-route tunnels capable of carrying passengers in autonomous electric vehicles at high speeds, according to the Las Vegas Convention and Visitors Authority (LVCVA).

‘Looking forward to building a Boring Company tunnel in Vegas,’ Musk said in a message fired off on Twitter.

‘Assuming to be operational by end of year!’

If the tunnel isn’t ready by the end of 2019, the Boring Company is eyeing a completion date of January 2021, just in time for the annual Consumer Electronics Show.

A final contract for the project was to be negotiated and presented for approval at a meeting in June.

The cost was expected to range from $35 million to $55 million, depending on the route and number and size of stations.

While the route would only serve the convention center, the LVCVA said it could potentially expand the tunnel to connect downtown, the McCarran International Airport, the Las Vegas Boulevard Resort Corridor and other parts of the city. 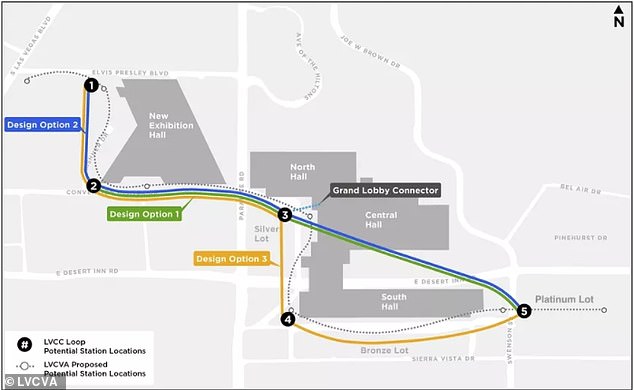 A map of proposed Boring Company tunnel routes connecting to the convention center. The LVCVA said it has the potential to be expanded to include other destinations around the city 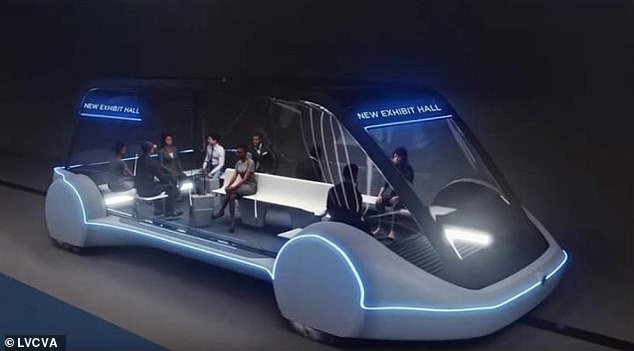 The firm will construct a loop of express-route tunnels that can carry riders in autonomous electric vehicles at high speeds. Pictured is a concept design of a transport vehicle

The Las Vegas Convention Center will cover some 200 acres when the expansion is completed.

A walk from one end to the other would stretch approximately two miles, creating a need for ‘an on-property guest transportation solution,’ according to the visitors authority.

It marks the latest in a series of contracts won by the Boring Company to construct high-speed tunnels in a major urban area.

Most recently, the Boring Company’s plans to build an express loop in Chicago have been called into question with the upcoming mayoral race.

The city had previously agreed to move forward with the Boring Company’s plan to construct a high-speed tunnel connecting the O’Hare International Airport and the downtown district.

Aside from the Boring Company’s high-speed loop tunnel, the city of Las Vegas also received proposals to build trams, gondolas and monorails.

‘Las Vegas is a high-energy, high-technology destination equipped to welcome the world, and we are excited to deliver a system that will help visitors efficiently navigate the city’s many offerings,’ said Steve Davis, president of The Boring Company, in a statement.

Davis told the Verge that the Boring Company is considering using Model Xs, Model 3s or another specially designed vehicle to transport passengers in the underground tunnel. 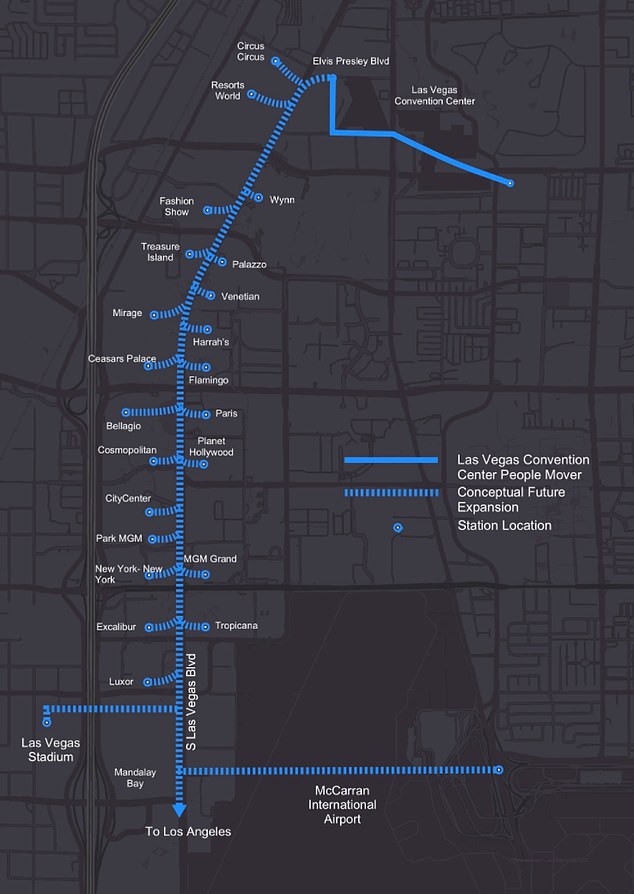 A proposed map of possible extensions for the tunnel beyond the convention center. The route could be extended to parts of downtown, as well as the Las Vegas Boulevard Resort Corridor

Musk late last year took a break from futuristic electric cars and private space travel to unveil a low-cost tunnel he sees as a godsend for city traffic.

The billionaire behind Tesla and SpaceX put the spotlight on the a 1.14 mile (1.8 kilometer) tunnel created by his Boring Company in Southern California for about $10 million.

The sample tunnel is part of Musk’s vision to have an underground network that cars, preferably Teslas, can be lowered to by lifts, then slotted into tracks and propelled along at speeds up to 150 mph (241 kmh).

Musk founded the Boring company slightly more than two years ago as a self-financed, side-endeavor to his work at Tesla and SpaceX.

The broad vision is that electric vehicles on city streets would be able to easily drop into tunnels or rise out using elevator platforms built into streets, or ramps where space allows.

Boring, cos, Elon, Las, Musk, says
You may also like: