Elon Musk has given a rare glimpse into the underpinnings of his electric car company’s futuristic autonomous vehicle technology.

At Tesla’s first-ever Autonomy Day with investors, the firm revealed it has developed what it says is the ‘best chip in the world’ that will allow its cars to achieve full self-driving capabilities without the need for human intervention.

The new chip has allowed Tesla to make strides in bringing fully autonomous software to its fleet of vehicles, so much so that Musk predicts Tesla will have more than one million fully self-driving cars on the road by 2020. 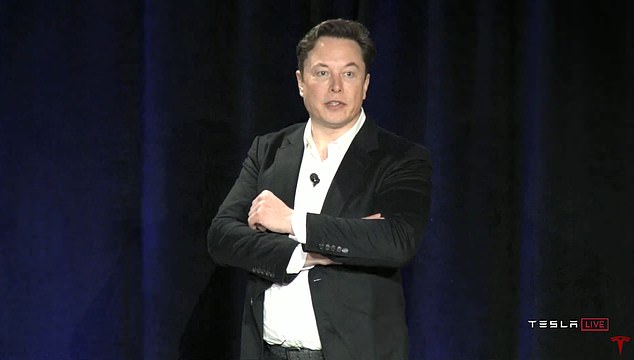 Elon Musk has given a rare glimpse into the underpinnings of his electric car company’s futuristic autonomous vehicle technology. The firm held its first-ever Autonomy Day

‘It seems improbable. How could it be that Tesla, who has never designed a chip before, would design the best chip in the world?’ Musk said on stage at the event, which was hosted at Tesla’s Palo Alto, California headquarters.

‘But that is objectively what has occurred. All Teslas being produced right now have this chip.

‘All Tesla cars right now have everything necessary for full self-driving. All you have to do is update the software,’ he added.

Peter Bannon, Tesla’s vice president of autopilot engineering, said the computer is low power and low cost, as well as ‘straightforward and simple.’

The chip has six billion transistors and can process 2.5 billion pixels per second from onboard cameras, Bannon said.

The self-driving computer is responsible for processing and receiving data from the car’s eight, 360-degree cameras.

There are two chips integrated in a single computer inside the car, both of which collect information from the world around you, using a combination of mapping, radar and ultrasonic sensors, Bannon explained.

The two machines exchange their analysis of the data, they ‘agree then act’ and inform the car’s decision-making process.

Musk said there’s ‘a tremendous amount of redundancy and overlap’ to make sure the computer operates as safely as possible.

‘Any part of this could fail and the car keeps driving,’ he explained. ‘The probability of this computer failing is substantially lower than a human losing consciousness.’ 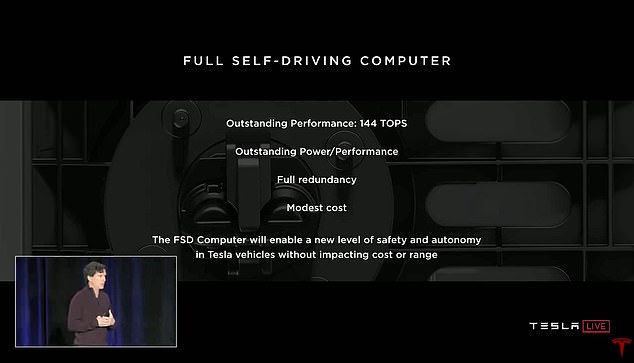 The computer has six billion transistors and can process 2.5 billion pixels per second from onboard cameras. There’s a ‘tremendous amount of redundancy’ to improve safety 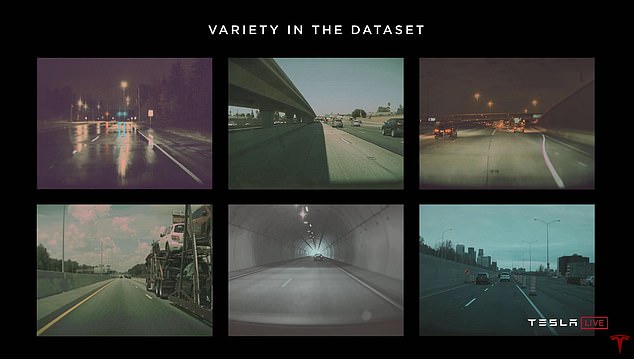 There are two chips integrated in a single computer inside the car, both of which collect data from the world around you, using a combination of mapping, radar and ultrasonic sensors 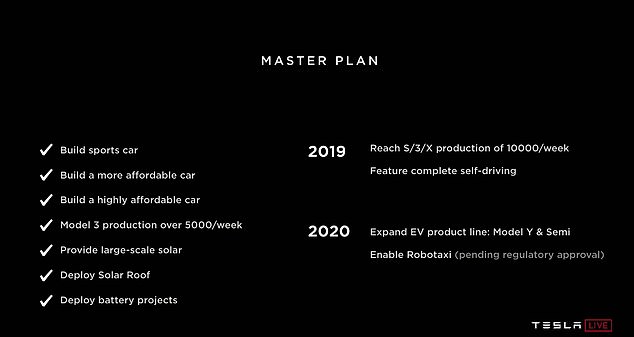 The company is now working on developing its next-generation chip, which Musk says is ‘at least’ three times better than the current version. He expects it to be ready in two years

It can now run neural networks that are seven times larger and ‘more sophisticated.’

Andrej Karpathy, Tesla’s director of AI and Autopilot vision, explained just how challenging it is to train self-driving vehicles to handle all the scenarios encountered on the road.

The company has been working for at least five years to make its neural networks more intelligent.

This involves humans annotating and labeling data to help Tesla computers recognize common things like bicycles and tractor trailers, as well as common behaviors, such as when a car is changing lanes.

Critics have pointed out that Tesla’s autonomous software doesn’t use LIDAR – a technology that’s become commonplace in conversations about self-driving cars.

LIDAR relies on laser sensors to assist with the car mapping its surroundings.

‘LIDAR is a fool’s errand,’ Musk said. ‘Anyone relying on LIDAR is doomed.

‘…It’s expensive, and unnecessary and as Andre was saying, once you solve vision, it’s worthless to have expensive hardware on the car.’

The company is now working on developing its next-generation chip, which Musk says is ‘at least’ three times better than the current version.

Musk added that he expects the new chip to be ready in about two years.

claims, created, Elon, Musk, Tesla
You may also like:

Asteroid MISS: An asteroid bigger than a bus just shot past Earth as far as the Moon

Cars can 'talk to traffic lights' to anticipate green lights

Collision between submarine and the Titanic's remains was kept quiet