Follow
Home » Science » Elon Musk’s flamethrowers are already on eBay for as much as $20,000

Elon Musk’s flamethrowers are already on eBay for as much as $20,000

Elon Musk’s $500 ‘zombie-killing’ flamethrowers are already showing up on eBay for as much as $20,000 after buyers finally get their hands on the Boring Company merchandise

Elon Musk’s ‘zombie-killing’ flamethrowers are already available to buy on eBay – less than 48 hours after the first batch was picked up by customers.

Elon Musk sold a limited run of 20,000 flamethrowers back in February to raise $10 million (£7.02 million) for his high-speed tunnel venture, the Boring Company.

The firm plans to build a network of tunnels where vehicles are transported on electric skates to their destination, reducing traffic on the surface.

Musk had earlier sold 50,000 hats to help raise money for the project. 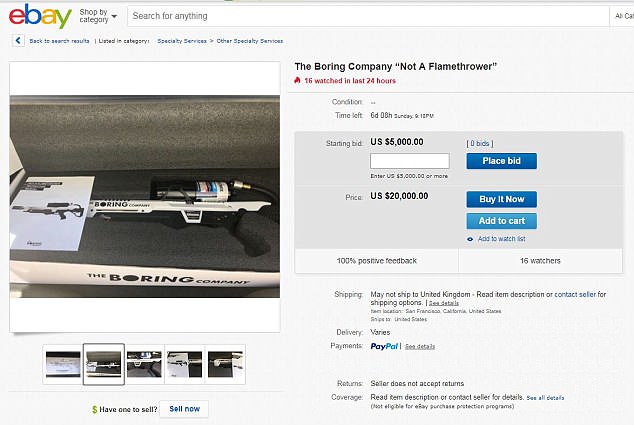 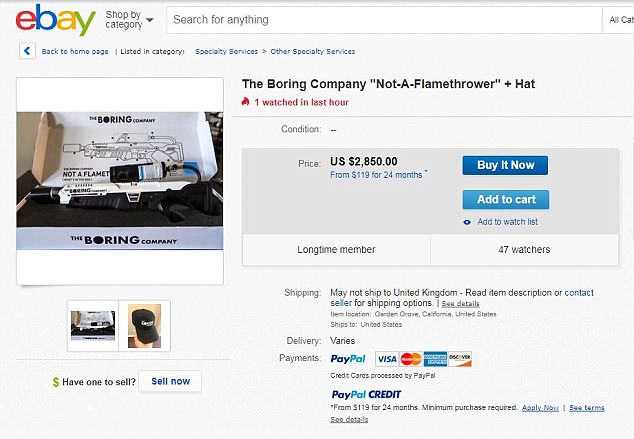 After the first batch of 1,000 flamethrowers launched this weekend, a number of the limited edition guns appeared on auction site eBay

The 46-year-old multi-billionaire hosted a pick-up party in Los Angeles where customers could collect the first batch of 1,000 Boring Company flamethrowers.

It’s unclear when the next batch of flamethrowers will ship to customers.

As the promotional device started to land with customers, Musk posted a safety warning to customers on Twitter, stating: ‘Please use as directed to avoid unintentionally burning things down.

Earlier this year, Musk revealed he had hastily re-branded the guns to ‘Not A Flamethrower’ after a number of customs agencies stated they would not ship any packages labelled as ‘Boring Company Flamethrower’ to customers in the mail. 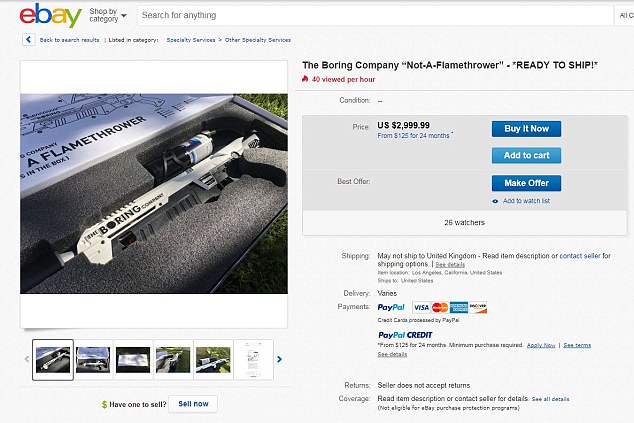 Each of the 20,000 Boring Company flamethrowers has a unique serial number. Elon Musk has previously teased plans to follow-up the promotional stunt with a ‘freezegun’ 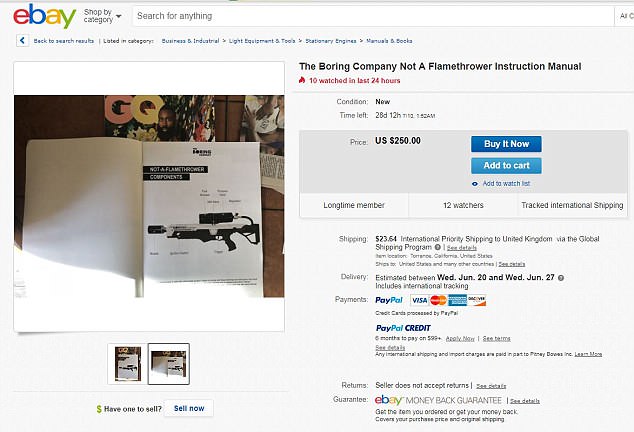 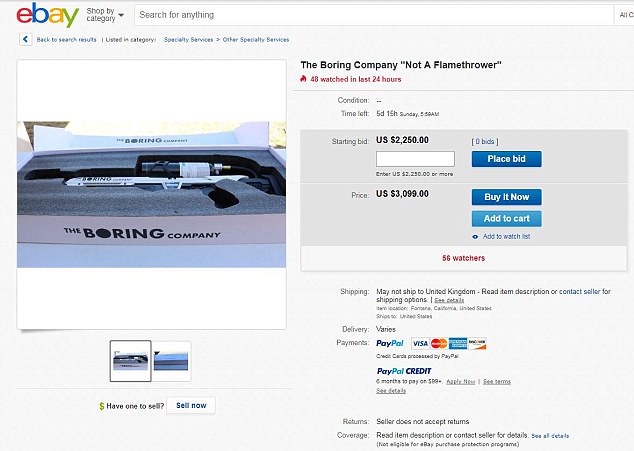 The flamethrowers cost $500 (£374) each when they went on sale back in January. Pictured are two customers picking up their flamethrower 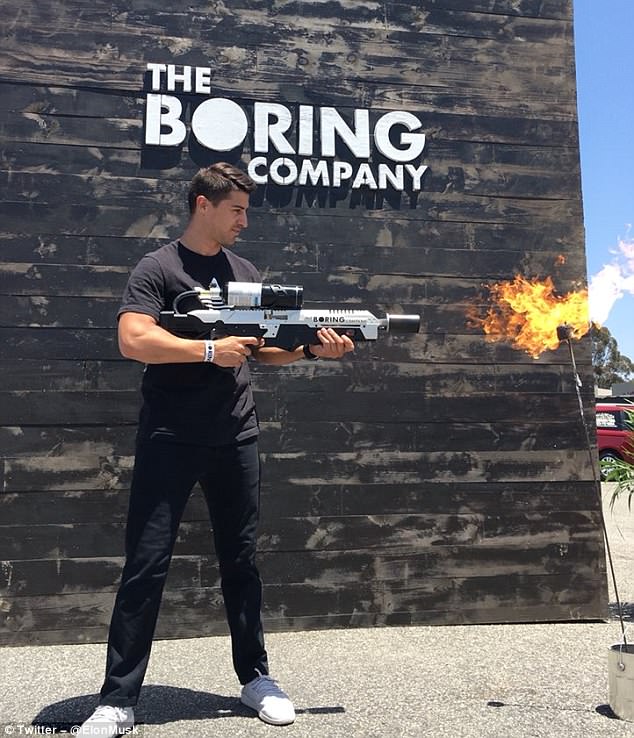 Elon Musk hosted a so-called Pick-Up Party in LA over the weekend, where customers could collect the first batch of 1,000 Boring Company flamethrowers

The flamethrower will be shipped under the brand name ‘Not A Flamethrower’, following complaints from customs agencies stated they would not ship any packages labelled as ‘Boring Company Flamethrower’ to customers in the mail 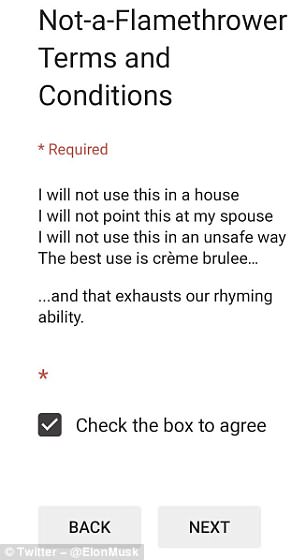 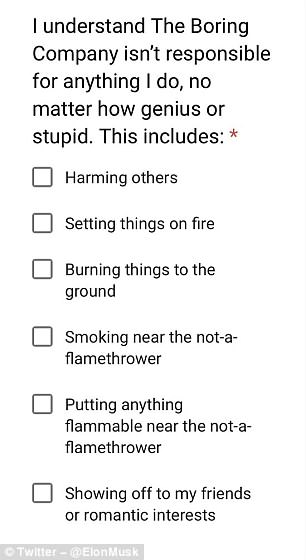 Elon Musk’s flamethrowers do not use a mixture of flammable liquids to launch flames great distances, like its military counterparts.

Musk has previously joked that the flamethrowers will be ideal for an impeding zombie apocalypse.

Ahead of the original launch of the gun, he said: ‘When the zombie apocalypse happens, you’ll be glad you bought a flamethrower.

‘Works against hordes of the undead or your money back!’

Following the success of the flamethrower, Musk has started to tease the next Boring Company promotional product. 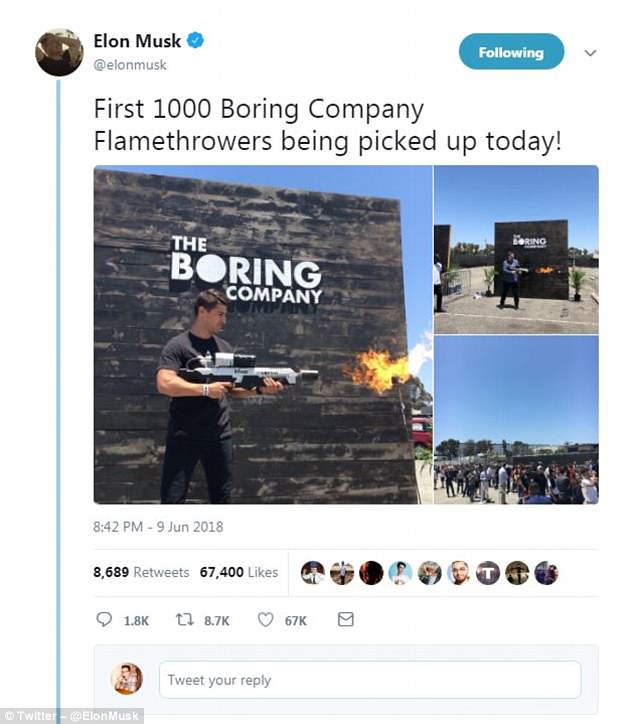 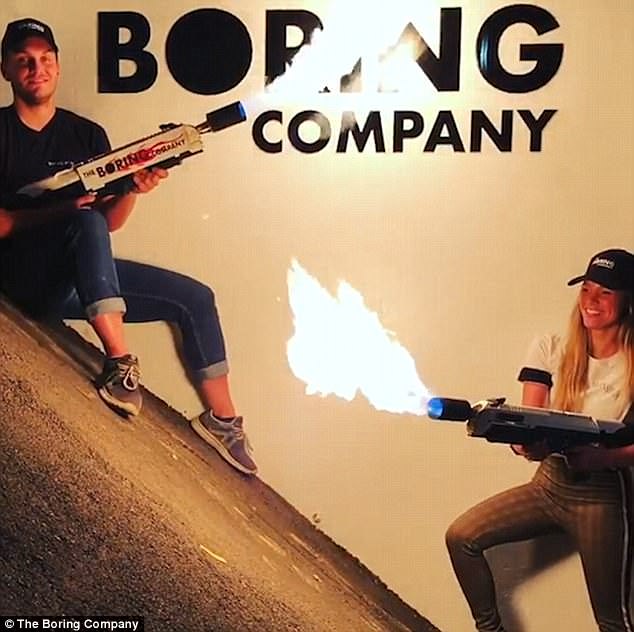 The billionaire said his company will ship a so-called ‘ice blaster’ before the winter.

‘Will offer a TBC ice blaster before the dry season starts in winter,’ Musk tweeted.

This is not the first time he has referenced a ice-gun when addressing the tunnelling startup’s future products on social media.

Elon Musk hinted at the Boring Company’s plans to launch a ‘freezegun’ in a tweet back in January.

The Boring Company has proposed to build a tunnel through West Los Angeles, passing underneath Sepulveda Boulevard through Culver City.

According to the company, the privately-funded tunnel would be able to transport cars at 150 miles per hour (240 kph) to help with LA’s ‘soul-destroying’ congestion.

It’s unclear how much a round-trip would cost, but the Boring Company said it will be ‘comparable to or lower than current public transportation fares’.